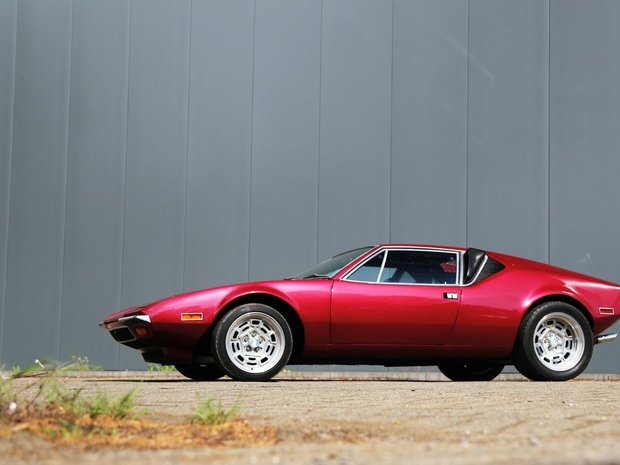 The company originally produced racing cars and their prototypes to move on to manufacture sports and luxurious vehicles too. De Tomaso was founded in 1959 and since 2004, when it went into liquidation, the company has been suffering from financial troubles and in 2015 was eventually sold to China's Consolidated Ideal TeamVenture.
Who Drives De Tomaso Cars
Being often underestimated, DeTomaso may appear to be an interesting brand for car racing enthusiasts as well as for luxury vehicles admirers. Probably the most iconic De Tomaso car is the Pantera which combined the Italian design style with the American power of a Ford engine. Even Elvis Presley was intrigued by the yellow 1971 Pantera model and bought it for his girlfriend. The car to these days bears the marks of the King’s fury as after the fight with his lover, outraged Elvis shot the Pantera in the steering wheel and the floorpan.
Rare & Exclusive De Tomaso Cars
Except for the Pantera, the production of other De Tomaso cars was small and occasional which rendered them rare and special. Moto racing fans should look for the Vallelunga which is the De Tomaso’s first road-going production model launched in 1963. It was built with a common for De Tomaso cars feature: an aluminium backbone chassis. One of the most famous De Tomaso’ s models is the Pantera with a 351 Cleveland Ford V8 engine which production started in 1971 and continued till 1993. This model was largely hand-built and was the first De Tomaso to be sold internationally. Finally it was replaced by the Guara which was designed by Carlo Gaino on the basis of a Maserati car. Other notable high performance model is the Mangusta. But De Tomaso also produced luxury coupes and sedans such as the 1971 Deauville and the 1972 Longchamp. For a few years being an owner of Maserati and Innocenti, they introduced the Maserati Kyalami and the Innocenti Mini de Tomaso.
JAMESEDITION
CATEGORIES
CATALOG
FOR BUSINESS
SETTINGS
Copyright © 2023 JamesEdition B.V.