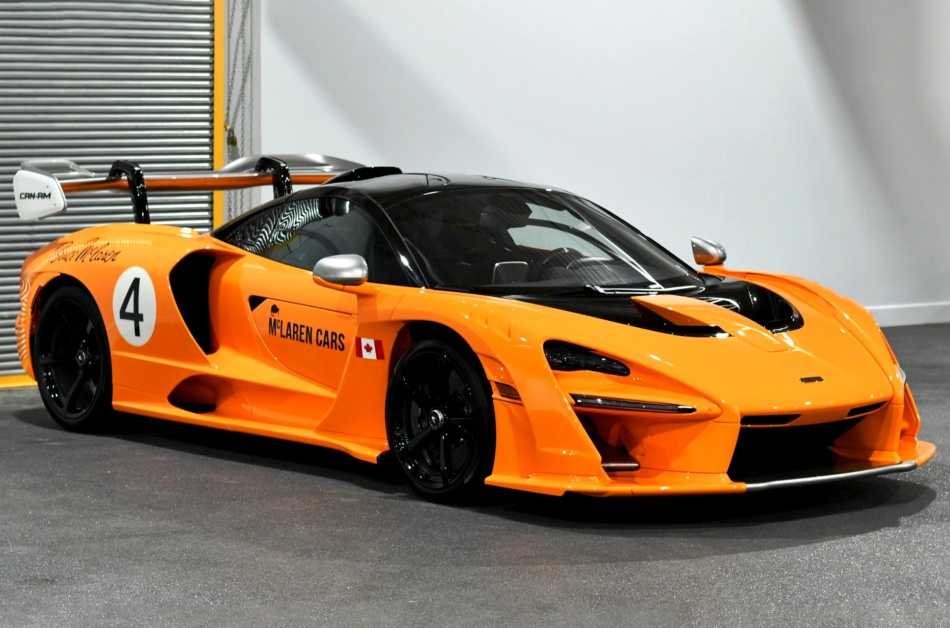 Back in the late 1960s, the McLaren team was unstoppable in Can-Am, a North American race series with very few regulations that saw some of the most extreme designs in motorsports history. The 1969 season in particular was all about the orange McLaren Can-Am cars, with the McLaren M8B starting on pole and winning all 11 races that season (three in Canada, eight in the U.S.). As an homage to that all-conquering M8B, there were three examples of the “McLaren Senna Can-Am” built overall. They feature specific upgrades in both appearance and performance over the already extreme McLaren Senna coupe.

The Senna, a technically road legal but track-oriented supercar and already one of the most extreme cars to ever wear a McLaren badge, served as the platform. 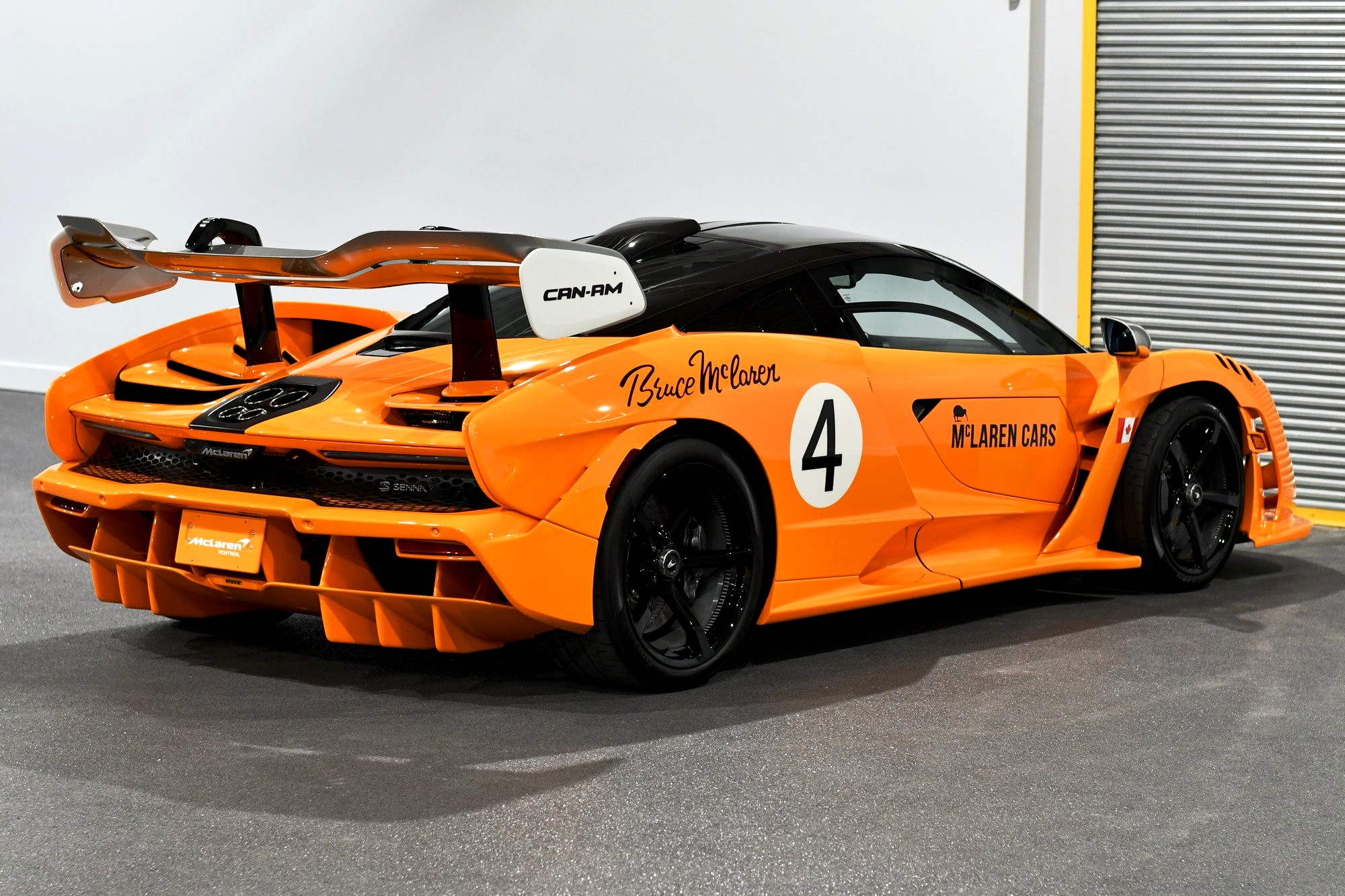 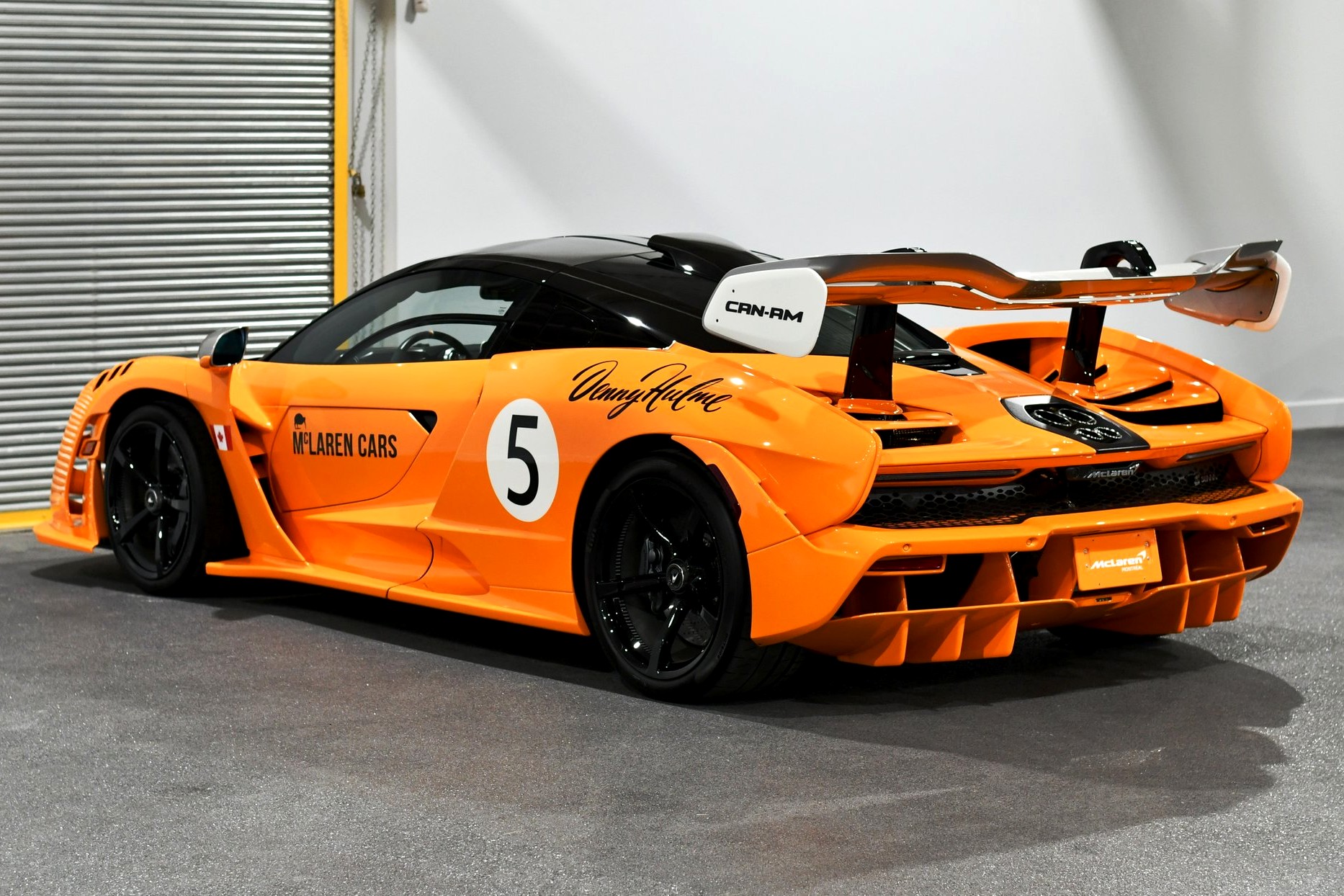 Compared to the standard Senna road car, the McLaren Senna Can-Am road car is built on the GTR race car chassis, it also features McLaren’s signature orange paint, with Bruce McLaren’s race #4 on the right side and Denny Hulme’s #5 on the other, along with the signature of each driver on the rear fender. 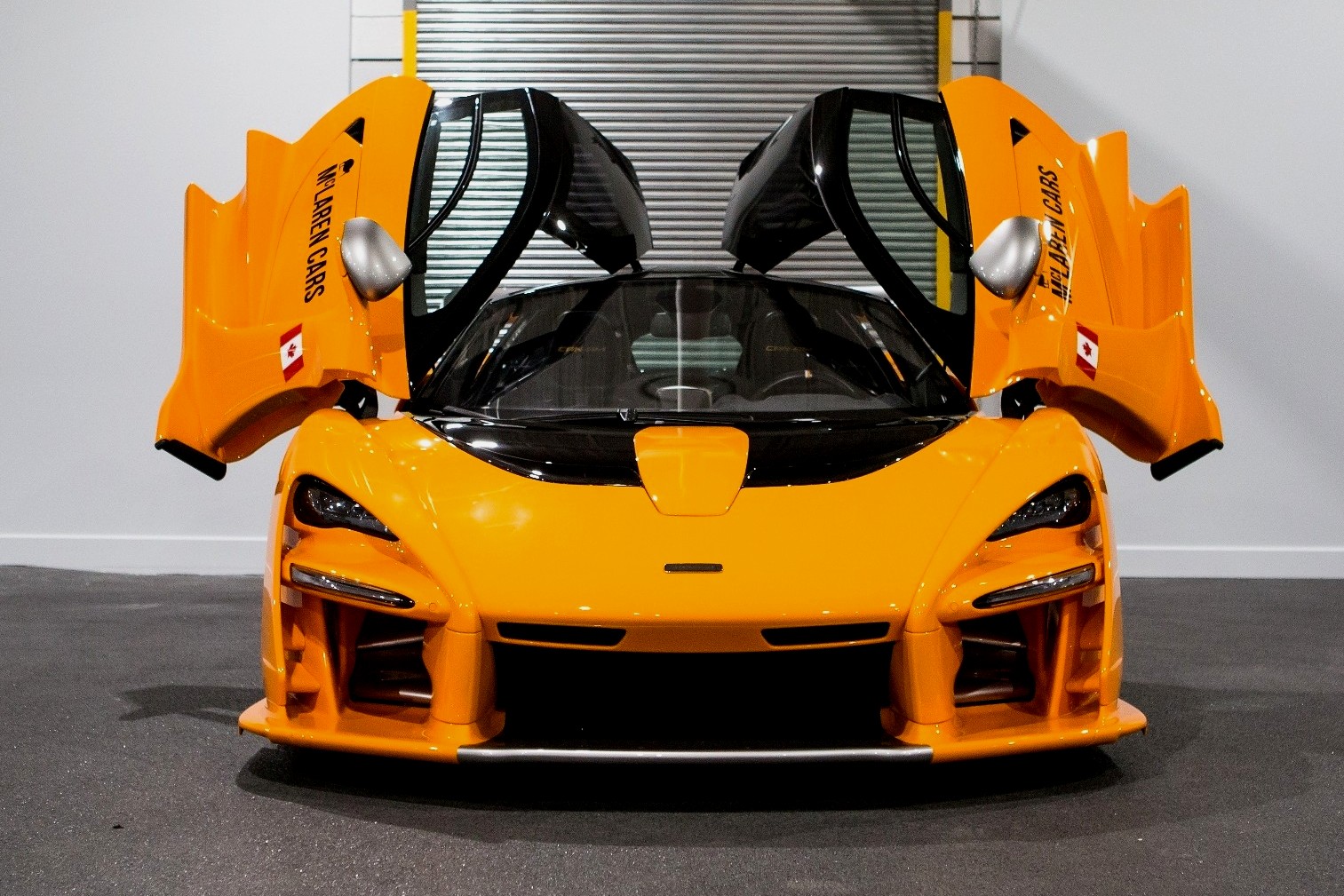 A special louvered front fenders design is one of the car’s unique features. 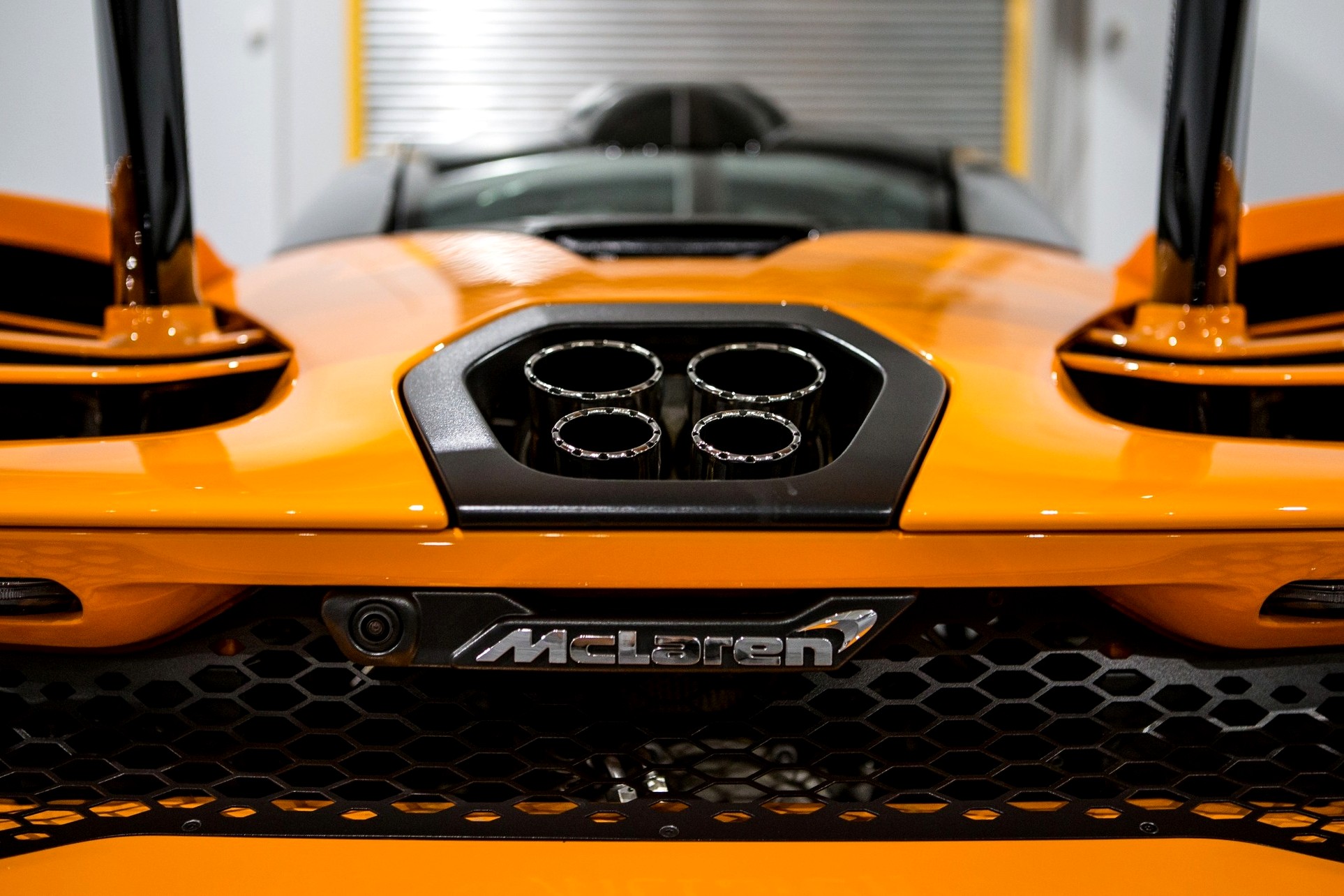 The engine gets the power upgrade seen in the track-only Senna GTR. The car also boasts new four-exit exhaust (instead of three on the standard car).

The engine used in the McLaren Senna Can-Am also gets the power upgrade seen in the track-only Senna GTR, with total output up to 814 horsepower compared to 789 in the standard car.

In addition to the Senna GTR (75 built), special editions of the Senna have included the Senna LM (20 built) and the Senna GTR LM (5 built). The Senna Can-Am is even rarer, in addition to being very distinctive, it typically translates to collectability and serious value in the years to come. 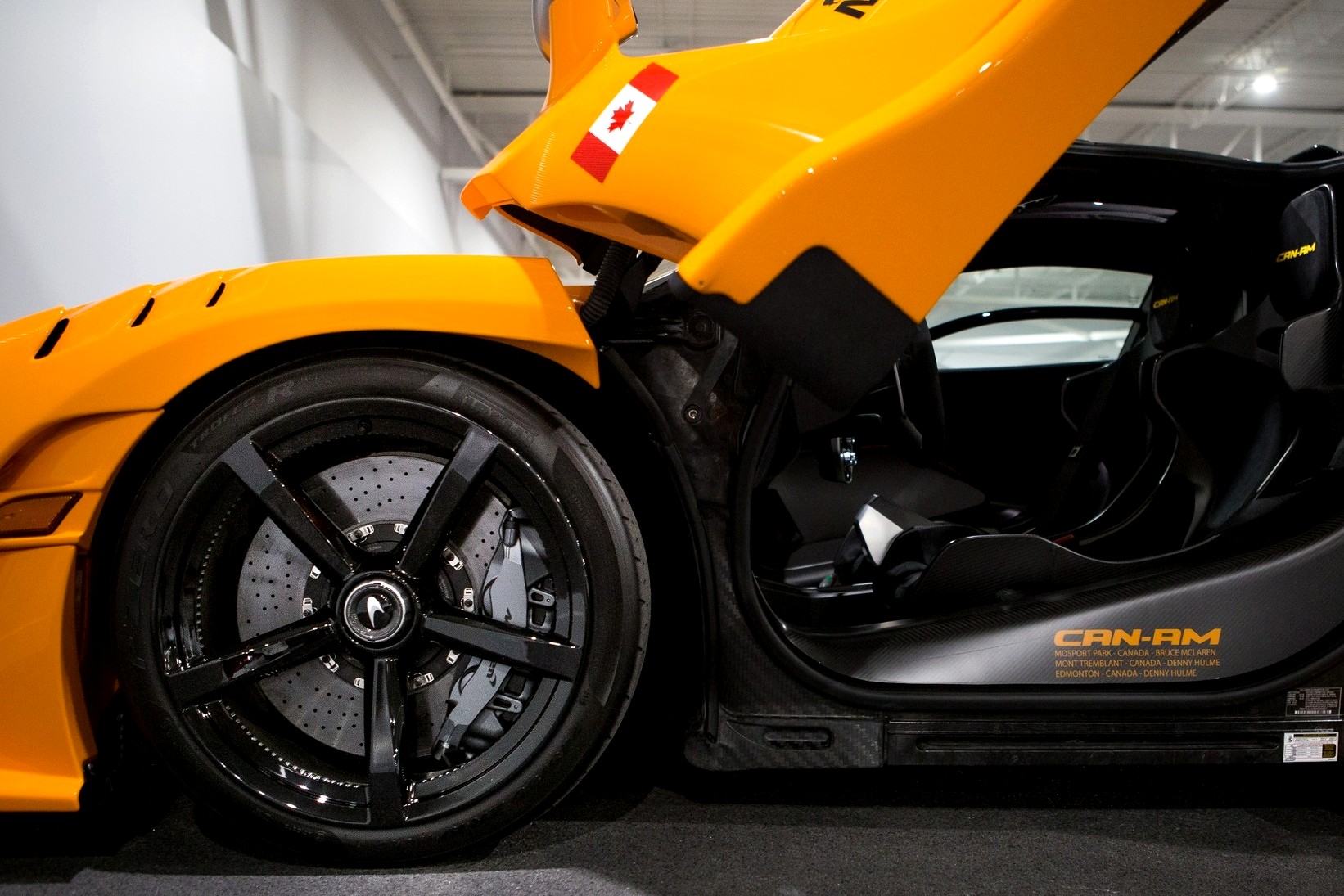 Other unique features include a custom wheel’s design, a 24-carat gold heat shield and bespoke Alcantara interior trim with the Can-Am logo in the headrest. View 23 Images

Since only three examples were built, this is a seriously rare buying opportunity on a future collectible for anyone who appreciates  McLaren’s history

The Canadian-American Challenge Cup, or Can-Am, first ran in 1966 and attracted both manufacturers and spectators with its lack of regulations. There was no limit on engine size and aerodynamics were practically unrestricted. The most successful Can-Am race cars in the early years were Lolas and McLarens – advanced British chassis powered by large and highly tuned American V-8s from Ford and especially Chevrolet. 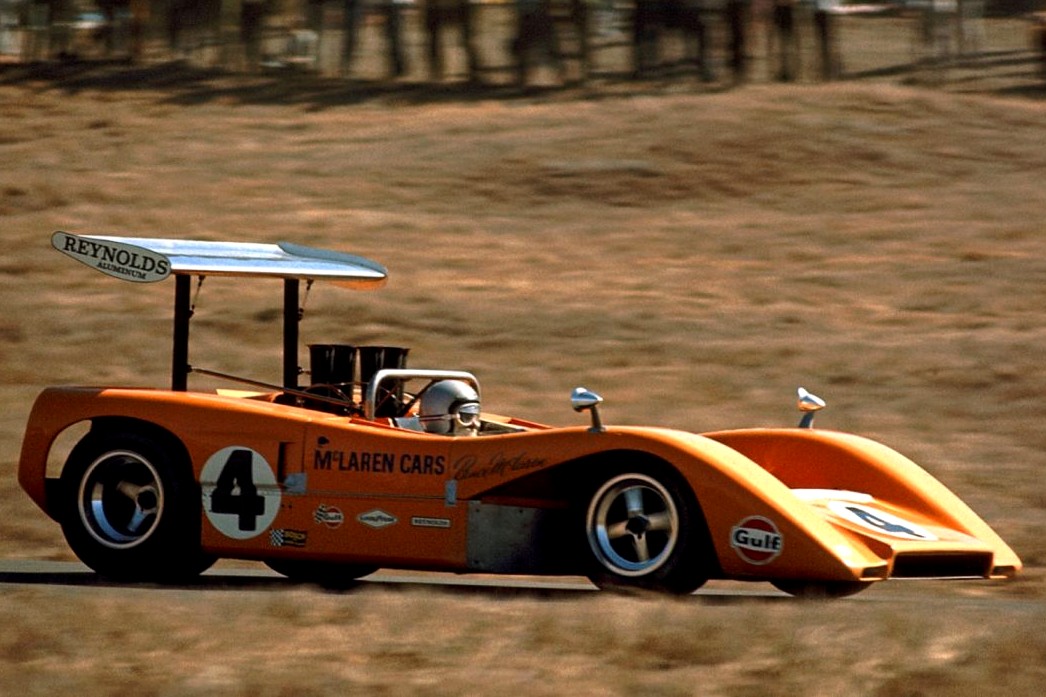 McLaren’s rival Lola won the first Can-Am championship in 1966, but the McLaren team hit its stride the following year with the M6A (they also sold a version to customers called the M6B) and kept going from there, with evolution in design and performance of McLaren’s Can-Am models keeping the team at the top for the rest of the decade and beyond.

The new-for-1968 McLaren M8A Can-Am was designed around the Chevrolet big-block V-8, and it won four races that year along with the championship title. 1969 saw the M8B with its high rear wing, wider bodywork, and higher output of well over 600 horsepower.

The team’s two M8Bs were almost always in a class of their own, with either Bruce McLaren or Denny Hulme at the wheel. The series earned the nickname “The Bruce and Denny Show” due to the McLarens always leading the rest of the field. 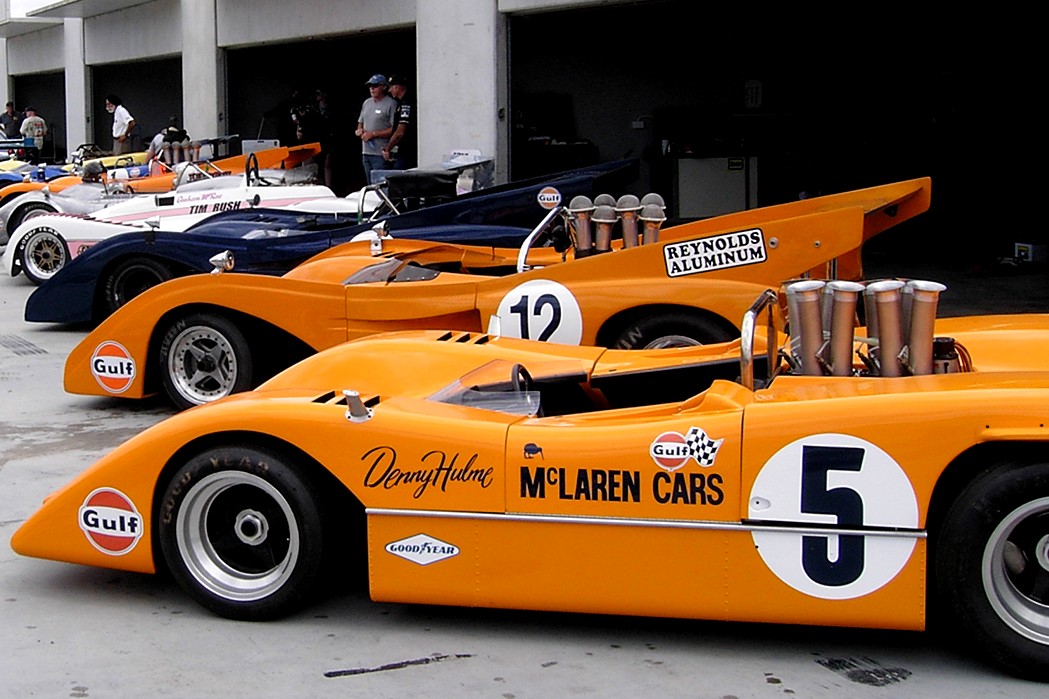 Sadly, while testing the 1970 M8D at Goodwood in England, Bruce McLaren suffered a fatal crash in June of that year, but McLaren bounced back and still won the Can-Am championship that season. Then, the McLaren-Chevrolet M8F won the title in 1971. By 1972, however, Porsche had entered the series with its turbocharged 917 spyder, and despite McLaren’s larger and more powerful 1972 M20, the era of the orange cars was over and McLaren put more focus into its Formula One efforts.

Since 1969 was the peak of McLaren’s winning ways in Can-Am, it was natural for that year’s M8B to inspire a limited tribute model, Senna Can-Am. 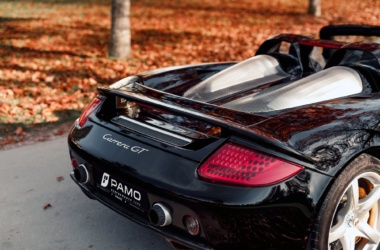 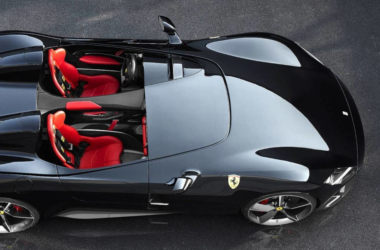 AskJames Сars
How to Gain Access to a Limited Edition Car
For the buyers who are not yet on the manufacturers’ VIP list for limited edition models. 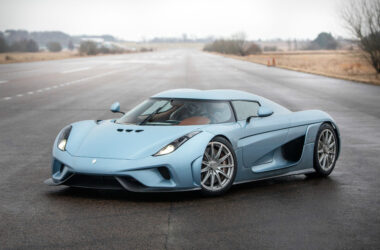 JamesChoice Сars
A supercar as an investment: how to buy and earn from it
Fast cars that will triple in value in two years.
Newsletter
Exclusive luxury insights
For newsletter subscribers only