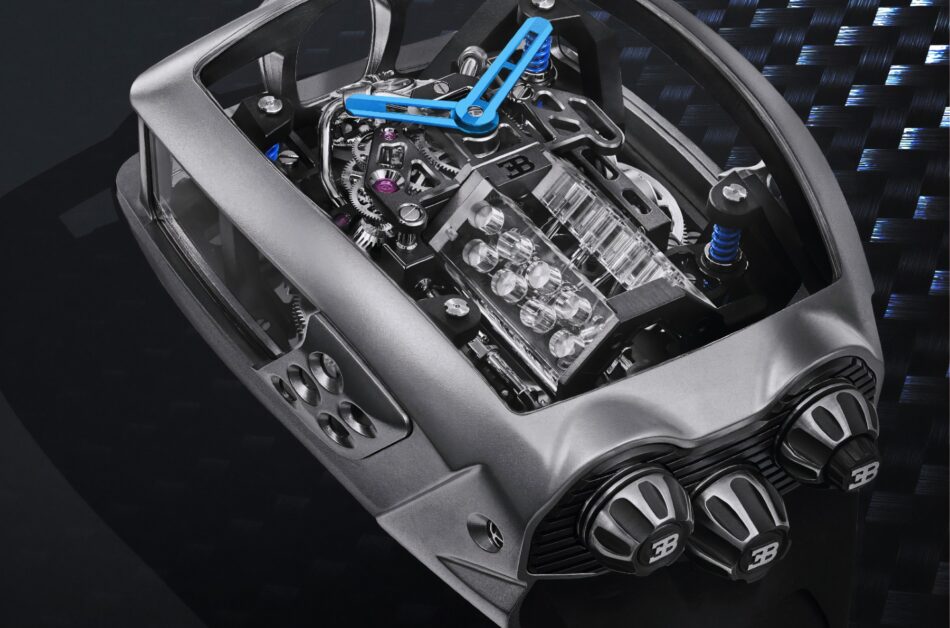 This one-of-a-kind watch inspired by a supercar engine certainly promises to add some va va vroom to your collection.

New York-based jeweler and watchmaker Jacob & Co, which was founded by billionaire Jacob Arabo, revealed a new watch for Bugatti last spring as part of a multi-year partnership between the two companies.

Now, the first examples from this hotly-anticipated new range are available on JamesEdition.

The cutting-edge accessory was inspired by the Bugatti Chiron, which is the fastest and most powerful supercar in the luxury car manufacturer’s history. 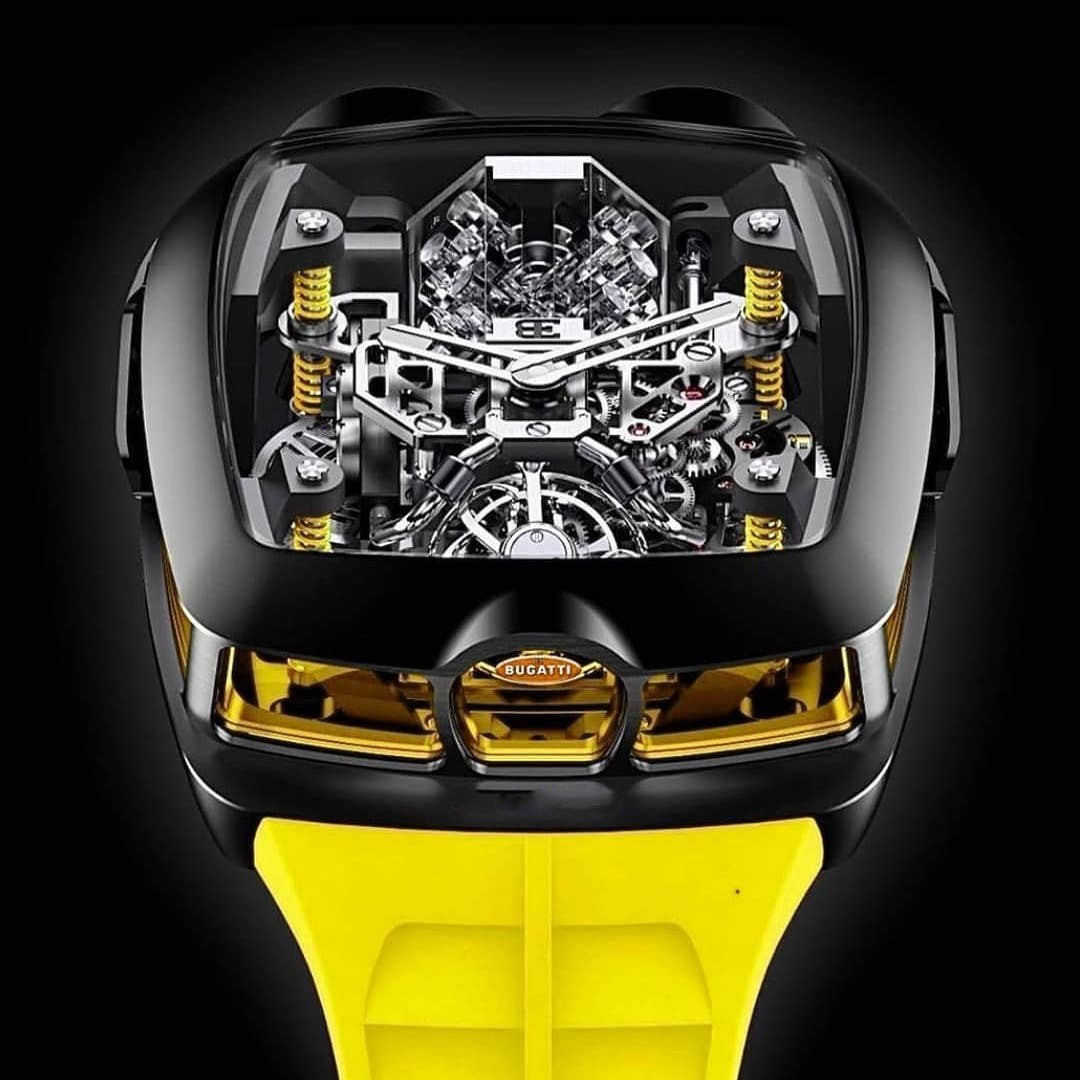 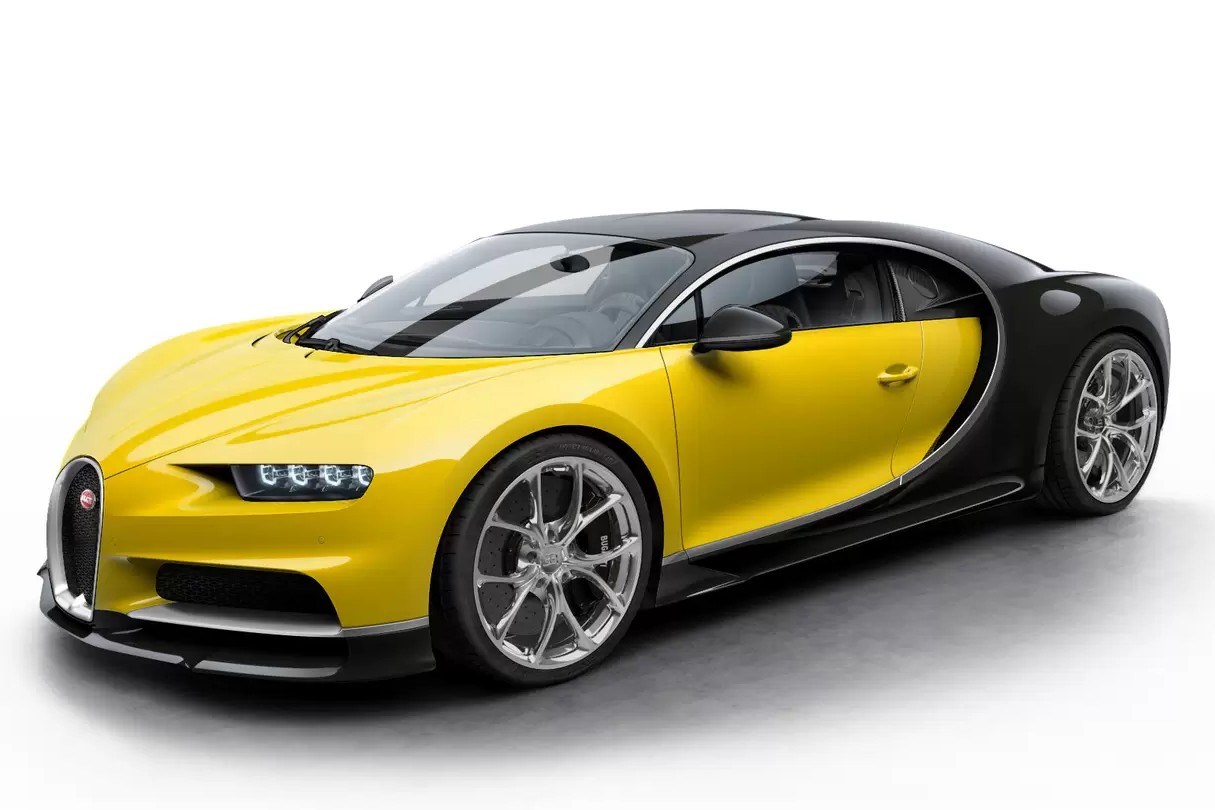 Meet the new Bugatti watch by Jacob & Co: A tiny ‘engine’ on your wrist

What makes this Jacob & Co timepiece stand out, is that is modeled after the Chiron’s engine and it took almost a year for craftsmen in Geneva to deliver this pioneering design.

The watch casing is inspired by the streamlined design of the Chiron complete with the horseshoe grill, while the movement – placed under a sapphire crystal face – mimics its 16-cylinder engine. 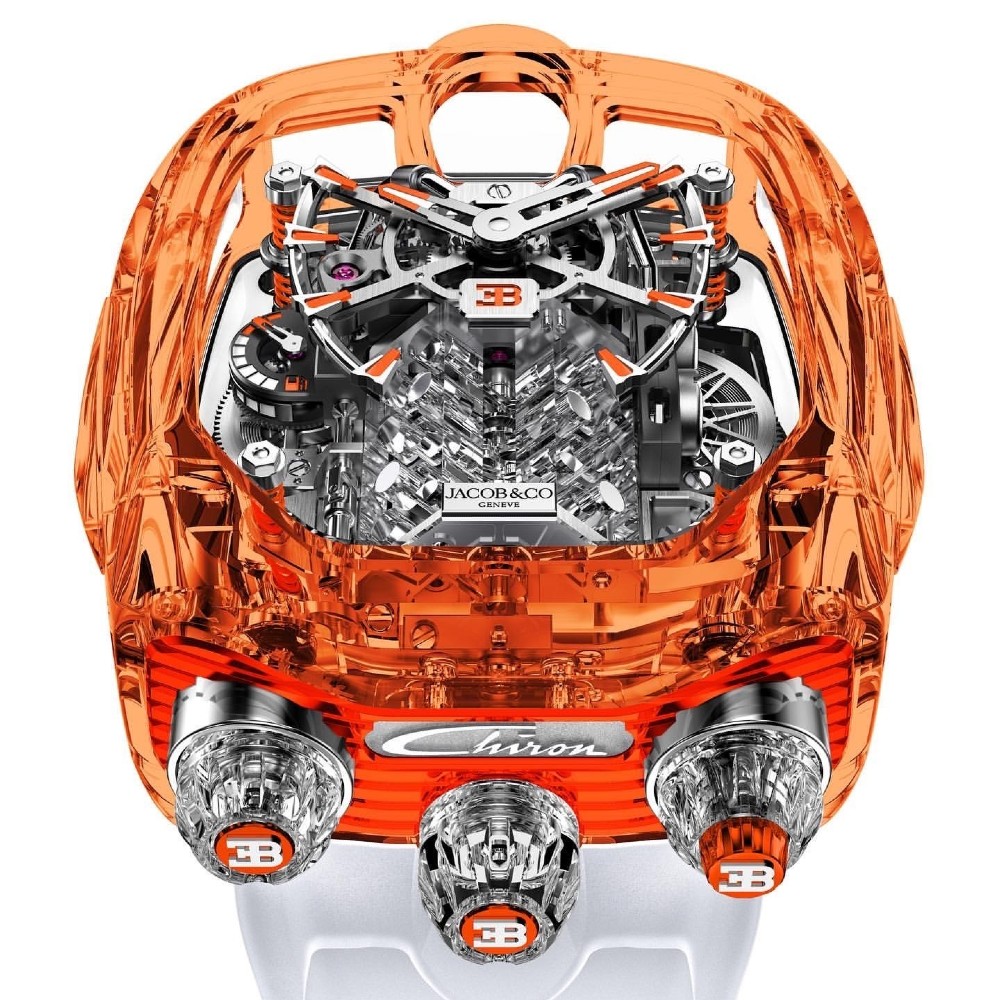 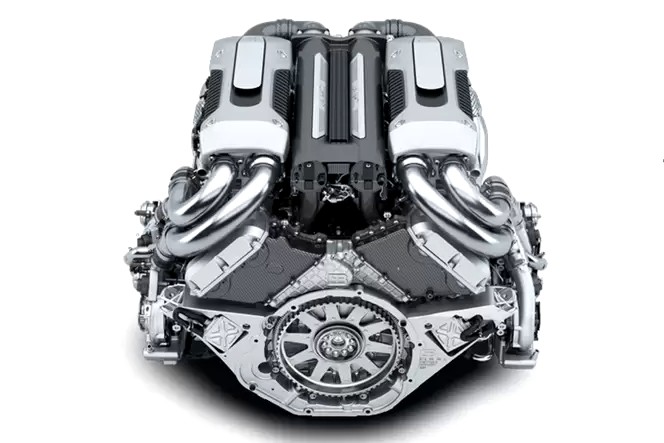 If you push the right-hand crown of the timepiece, the miniature ‘engine’ comes to life with the crankshaft turning and 16 pistons pumping up and down just like a real-life combustion engine.

Two ‘turbochargers’ – down from four in the actual Chiron engine – on the side of the engine block spin while the engine runs, add an extra wow factor.

Another car-themed detail is the fact that the entire mechanism is suspended on four mini shock absorbers, which allows it to move up and down within the case.

The intricate movement is made up of 578 components.

Jacob & Co says that the fully customizable Bugatti Chiron Tourbillon timepiece has ‘done something no one has ever even attempted before – to seamlessly marry engines and watches’.

The new tourbillon is available in various colorways, with choices including jet black titanium and rose gold casings. It can also be upgraded to include dazzling diamond or sapphire detailing. It is finished with a rubber strap and a titanium buckle.

This isn’t the only model in the Jacob & Co and Bugatti range.

This timepiece features a turquoise dial adorned with the Bugatti crest and the power reserve indicator was renamed to ‘Fuel’.

Only 39 individually numbered Twin Turbo Furious Bugatti watches were created, 18 were made in carbon fiber, 18 in rose gold, and three with diamonds. 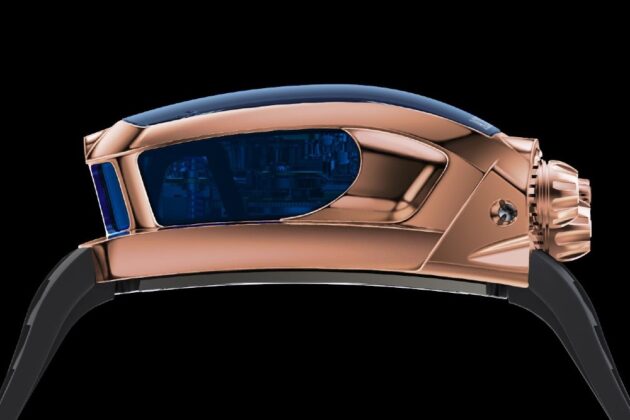 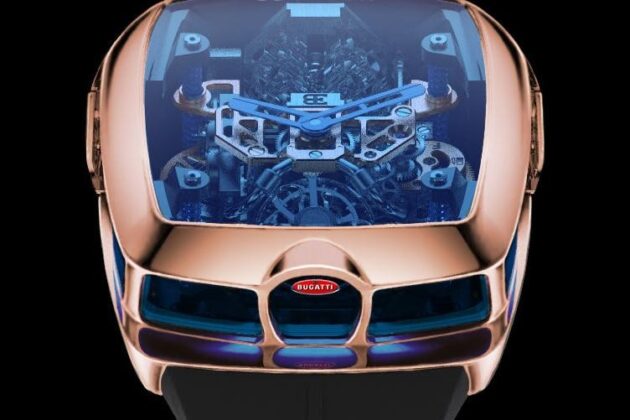 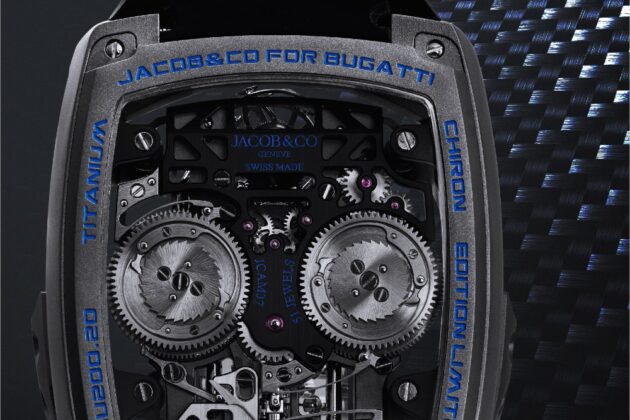 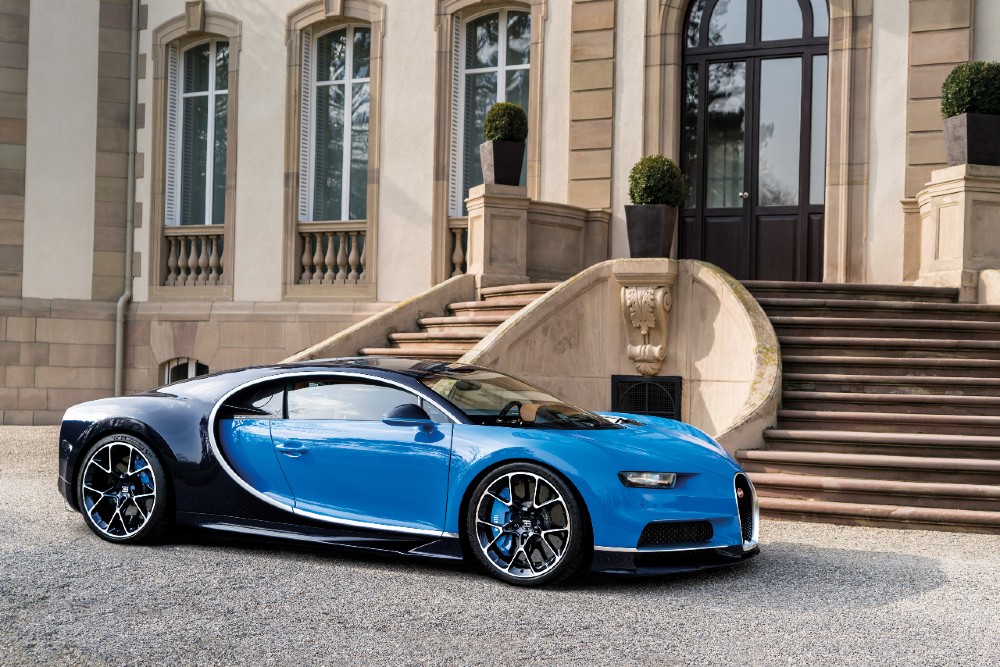 The Epic X Chrono Bugatti was the second release in 2019. There were 110 pieces made to celebrate Bugatti’s 110th anniversary

The design of the dial features the colors of the French Tricolore in homage to Bugatti’s beginnings, as the company was founded in 1909 in Alsace, France.

Other details include a custom-made carbon case and a special rubber strap, inspired by the rear of the Bugatti Chiron, with an ‘EB’ logo on the buckle honoring Bugatti founder, Ettore Bugatti.

Get them while you can

When it comes to the Bugatti Chiron Tourbillon, this newer model starts from $240,000 with the original black titanium casing.

There is also a rose gold version studded with baguette diamonds on for $475,000, while a highly sought-after orange sapphire rendition is priced at just over $824,000. Other customized examples are available for POA only. 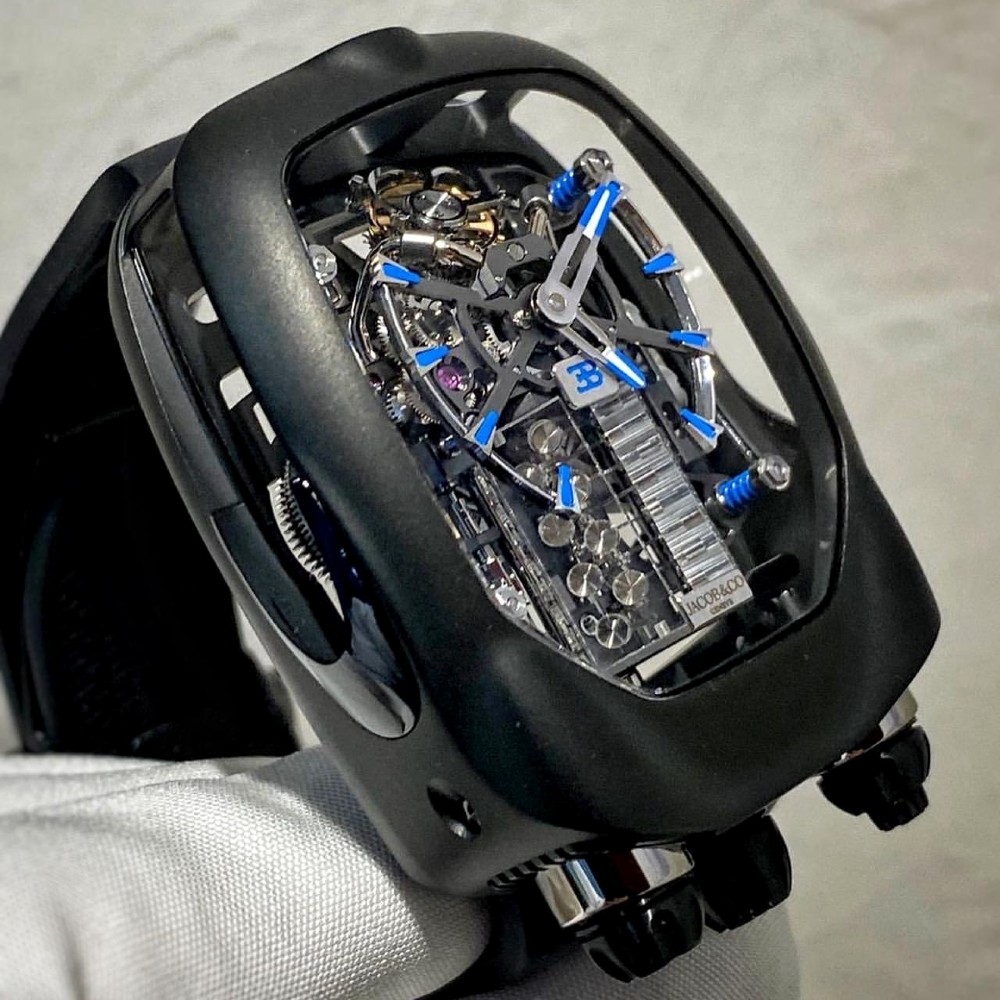 The Twin Turbo Furious Bugatti starts from $372,000 in its original guise, with it running up to more than $900,000 with a rose gold casing and diamond and green sapphire detailing.

If you want to get your hands on an Epic X Chrono Bugatti, you’d better be speedy as there is just one listed on JamesEdition priced at just over $25,600.

It’s not the first time that Bugatti has partnered with a watchmaker.

It has a longstanding relationship with the luxury Swiss brand Parmigiani Fleurier.

In 2006, Parmigiani produced the Bugatti Type 370 inspired by the Bugatti Veyron supercar. In 2009,  it released the new tourbillon dedicated to Bugatti Galibier 16C, and a few years later, the Type 390 which was also based on the Chiron.

More recently, Bugatti has partnered with Vita to release a range of slick smartwatches.

But going right back to the start, between the mid-1920s and the mid-1930s, Swiss watchmaker Mido produced dozens of timepieces for Bugatti. The notable feature of these pieces was that their gold cases were shaped like the iconic radiator grille on the famous car. They were specially ordered by Ettore Bugatti, and they then were gifted to his best pilots, mechanics and to family.