Step inside one of the best London penthouses that left a mark in the city's history and global pop culture. 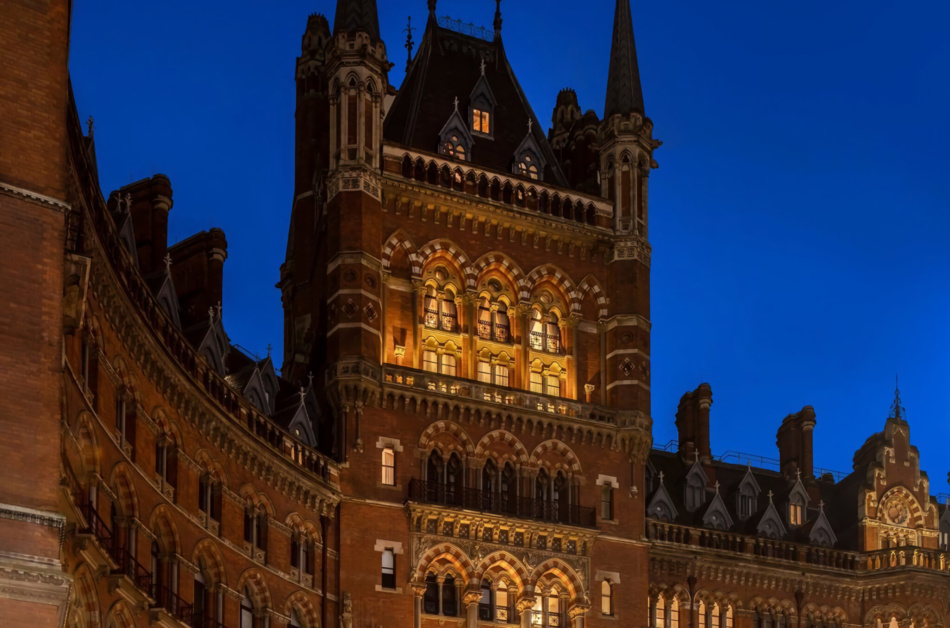 With an unbeatable location and a one-of-a-kind design making for an irresistible package, this London penthouse surely is the crowning jewel of the city’s property scene. The apartment sits atop one of the capital’s most revered Gothic buildings, St. Pancras Chambers, which was completed in 1873 and designed by famed architect George Gilbert Scott.

The building was originally designed as a hotel: the Midland Grand Hotel closed in 1935 due to poor profits and converted into offices for the neighboring rail network. By the 1960s there were plans to tear it down, but thanks to a high-profile campaign it was saved from destruction and designated a Grade I listed building in 1967.

Following a £200 million, decade-long renovation in 2010, this striking masterpiece was restored to its original glory and transformed into an upscale residential and hotel complex.

Some music fans might recognize the imposing redbrick building as the setting for the Spice Girls’ inaugural video for their 1996 smash hit, Wannabe. 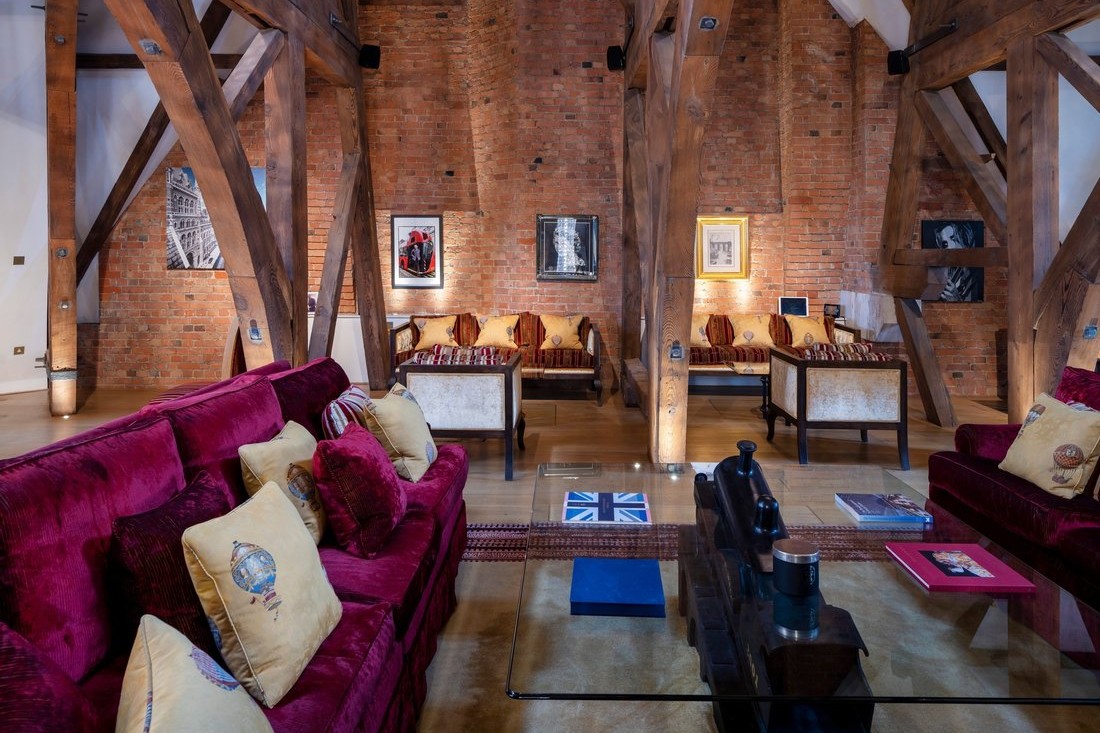 St Pancras Chambers suite, one of the best penthouses in London. 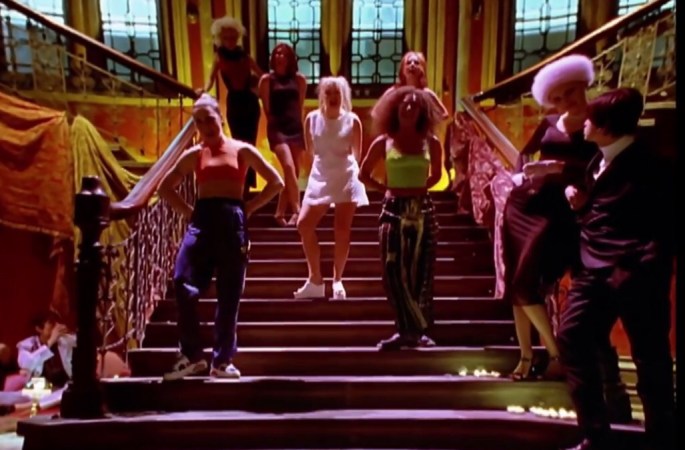 The girls are seen pulling up to the property in a limousine, before dancing through the fleur-de-lis printed corridors and most famously, down the grand split staircase.

Now, purchasers have the unique opportunity to own a slice of architectural and pop history, with the highly sought-after St Pancras Chambers’ penthouse apartment up for sale.

A once in a generation opportunity

Listed by Nest Seekers International, the triplex penthouse is described as a ‘once in a generation’ purchasing opportunity offering 6,000 square feet of space spread across the building’s sixth, seventh and eighth floors.

Before its current guise, the apartment served as a water tower for the original hotel that George Gilbert Scott was enlisted to design.

Due to this, the top floor boasts soaring ceilings with exposed Victorian wood beams which have been preserved in their entirety. Listing agent Jamie Shalson Marshall says this unique space is the property’s pièce de résistance and ‘one of the great surprises of the London property scene’.

To keep this top floor open-plan and leave the original features intact, architects flipped the traditional home layout on its head, with all of the bedrooms located on the first floor running off from the entranceway. 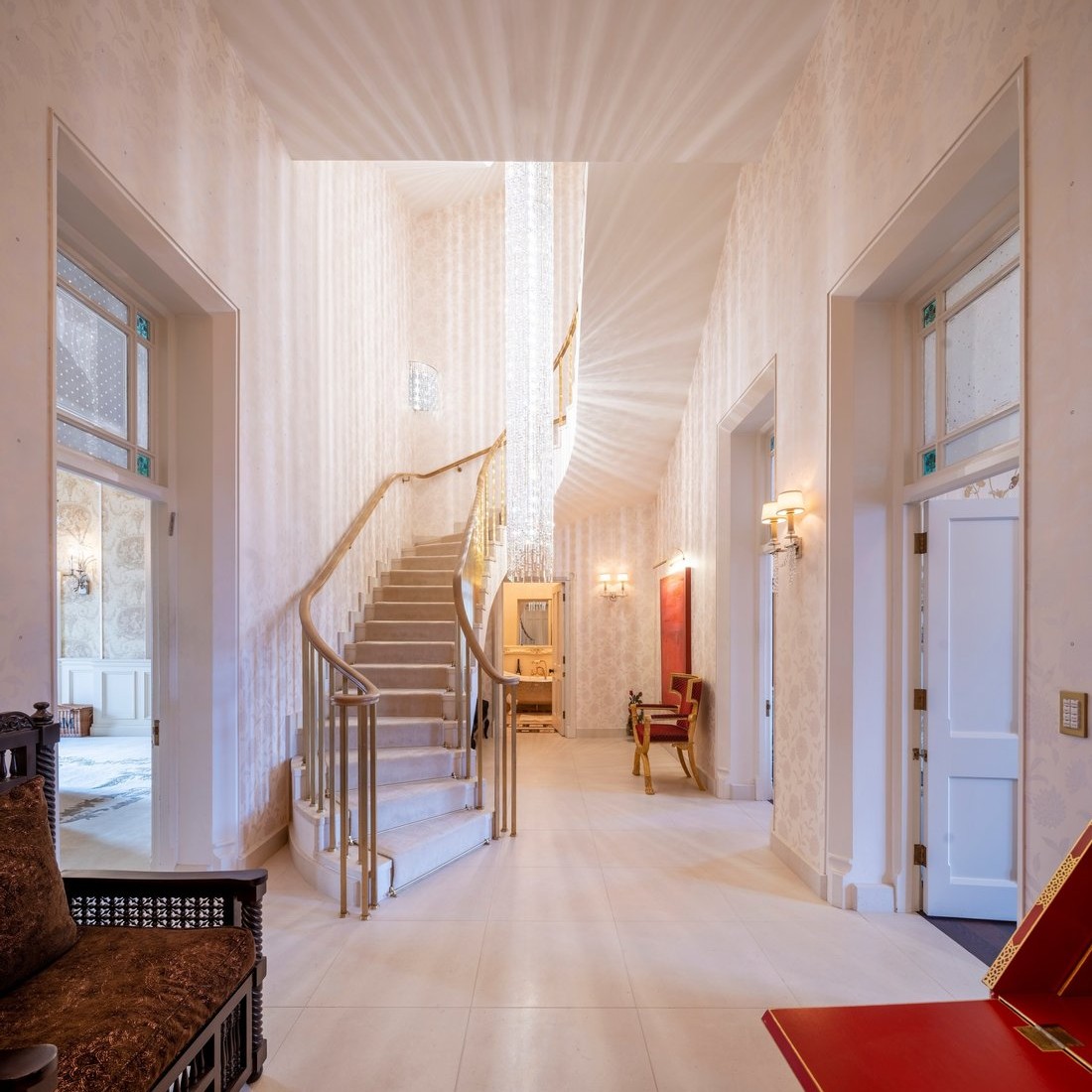 The hallway features a dazzling chandelier that runs the entire height of the property from top to bottom. 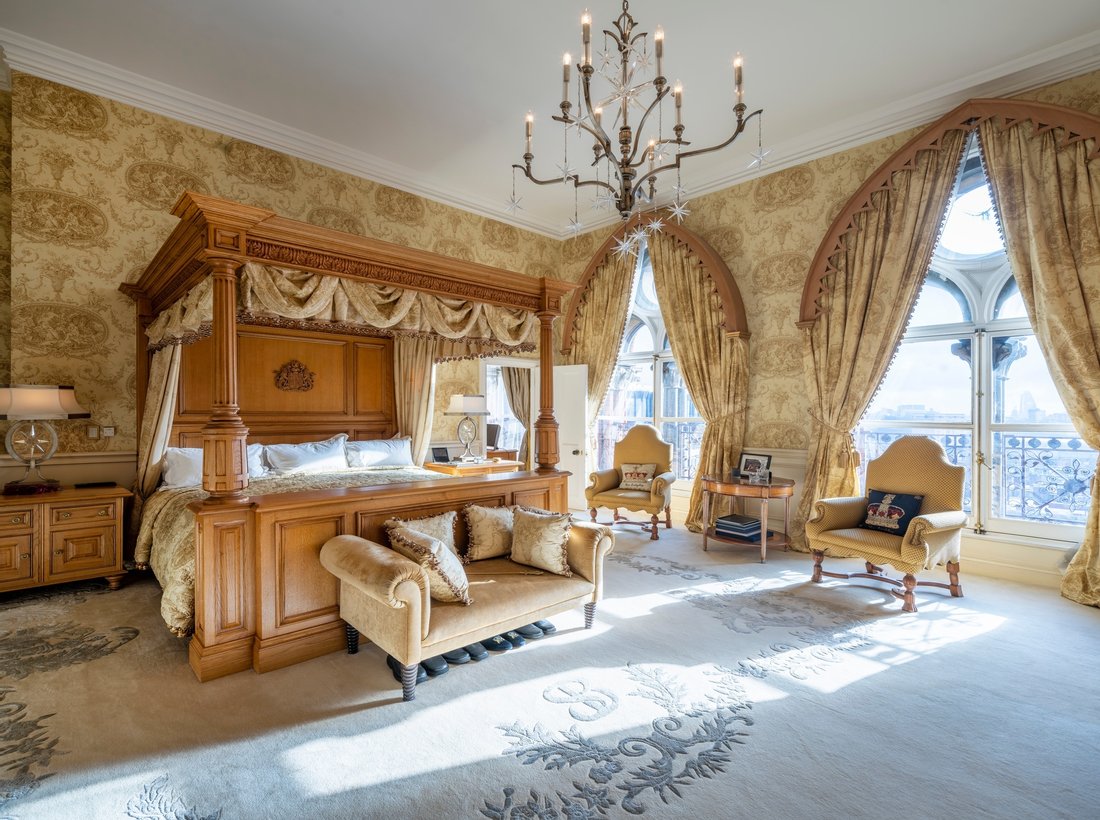 The penthouse is entered on the sixth floor via a private lift.

The contemporary-styled chandelier runs the entire height of the property from top to bottom, with a slick carpeted staircase spiraling around it.

Two large bedrooms and a guest bathroom are located off the entranceway, along with a sumptuous master bedroom complete with a four-poster bed and decadent French renaissance-style interiors.

One of the bathrooms includes a deep tub, with a mirrored surround, marble flooring and a feature fireplace, while another is home to a mosaic clawfoot tub and a shimmering chandelier.

Double height ceilings run throughout and add to the feeling of space, meanwhile giant window Gothic-style windows framed by dramatic draped curtains give way to stunning views over the city beyond.

The building’s 82-meter-high tower can also be seen from the apartment, with its iconic four-faced clock serving as an easy way to tell the time.

Five-star hotel services on the doorstep

On the design side of things, a blend of period and modern furnishings with different cultural influences makes for an attractive mix.

Sashaying up to the seventh floor, described as the ‘beating heart of the property’, there are two state-of-the-art contemporary-styled kitchens. On the eighth floor, the vast entertainment space promises to impress, with exposed redbrick walls, 15-foot-high ceilings and a maze of wooden beams artfully intertwined.

The most prominent feature, however, is a large bar area designed for entertaining on a large scale. It’s said the space can comfortably cater for up to 150 people. 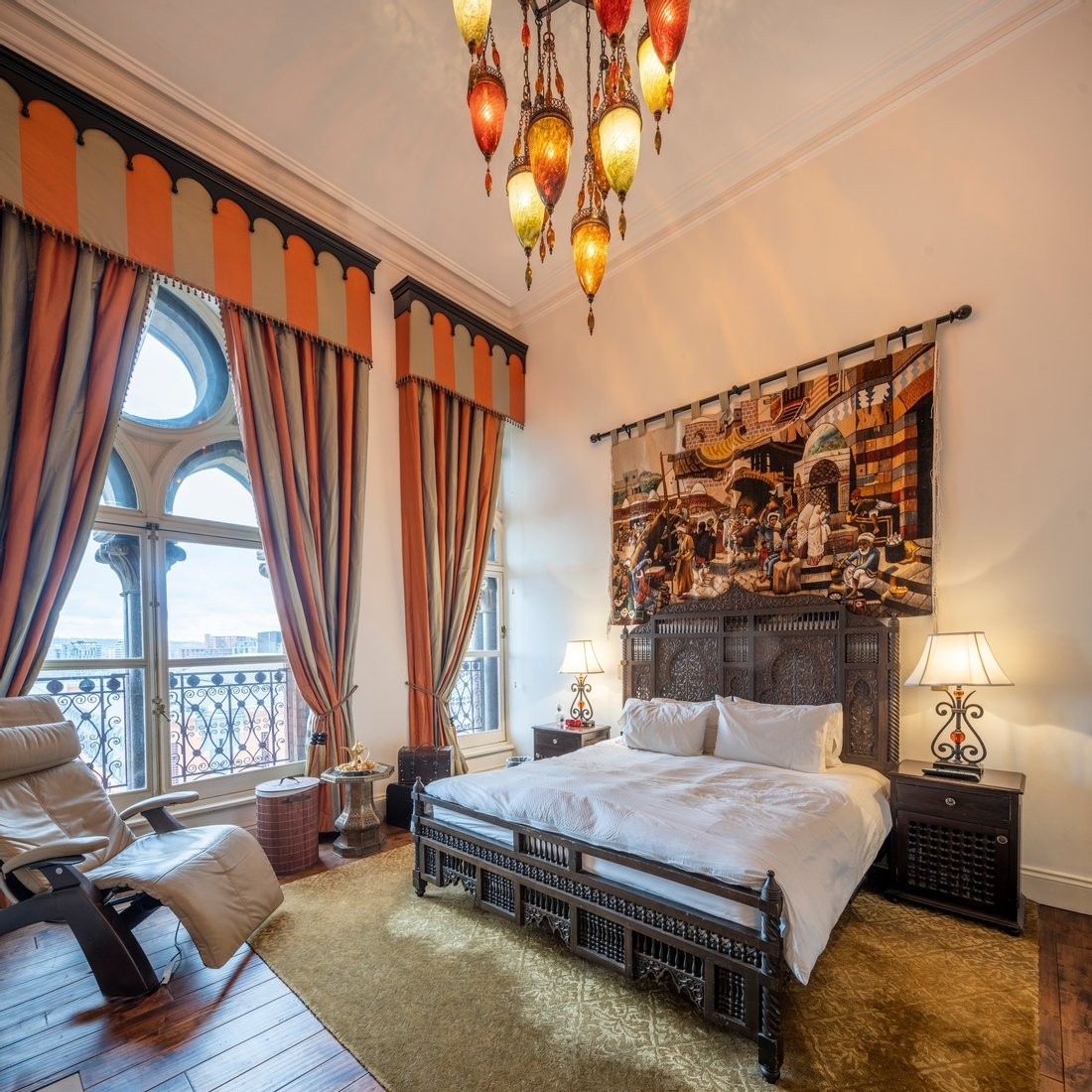 On the design side of things, a blend of period and modern furnishings with different cultural influences makes for an attractive mix. 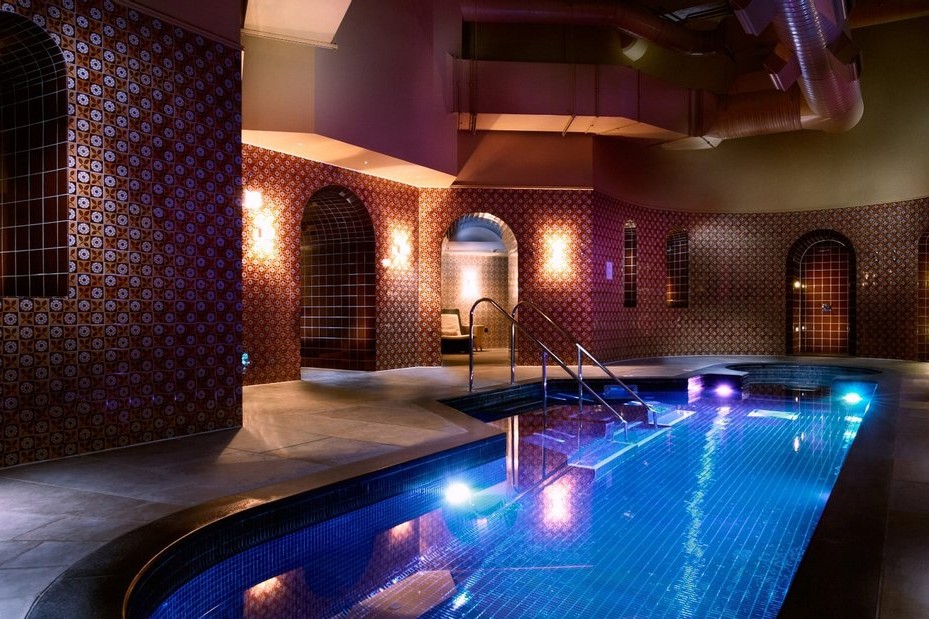 Residents also benefit from all of the amenities on offer at the 245-room Marriott Renaissance Hotel.

Along with perfectly-appointed interiors, other perks of this property include 24-hour security and two parking spaces.

Residents also benefit from all of the amenities on offer at the 245-room Marriott Renaissance Hotel, which occupies the rest of the building along with 66 other private apartments.

The five-star hotel is home to a number of fine dining restaurants (one helmed by celebrity chef Marcus Wearing) and bars, a state-of-the-art spa and a private members club.

One of London’s most dynamic neighborhoods

Nest Seekers International notes, that another feature that makes this property the best penthouse in London is its location in the heart of the NW1 neighborhood.

This address places you next to one of the world’s most iconic and famous train stations, with the Eurostar on the doorstep.

Meanwhile, Kings Cross has emerged as London’s buzzing tech hub, with Google, Expedia Group, Samsung and Toyota making bases in the area and Facebook set to join them this year. 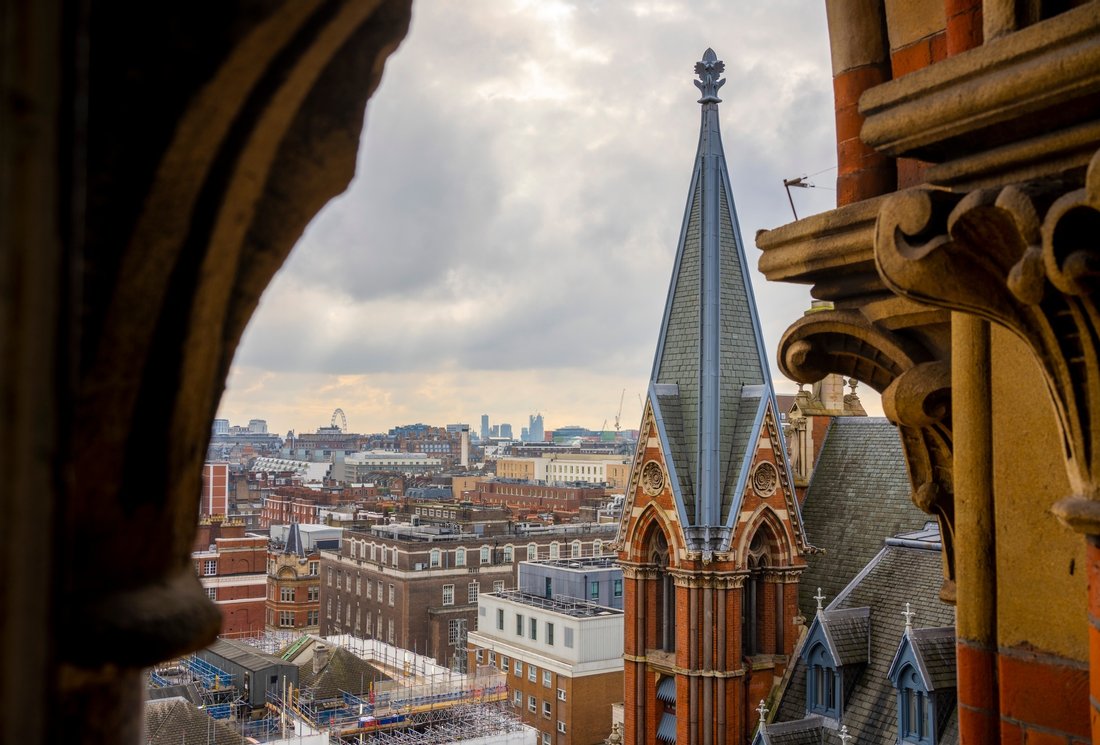 The property is located in the heart of the NW1 neighborhood.

On the cultural side of things, Islington’s Exmouth Market is just a stone’s throw away, along with the trendy Coal Drops Yard complex, where you can find shops and restaurants galore.

For art lovers, there are many galleries in the area including a branch of the renowned

Gagosian gallery and the Pangolin Gallery, which is one of the few galleries in London dedicated to sculpture.

Listing agent Marshall highlights that if not maintained as a bespoke home, this penthouse could also make for a ‘grand pied-a-terre’ or a ‘corporate showpiece’ given its easily accessible location.

It’s not known when the apartment last traded hands. 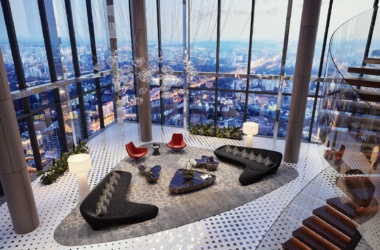 Handpicked Homes Real Estate
The Highest mixed-use property in Europe is now for sale in…
Step inside a one-of-a-kind triplex space under a giant glass dome. 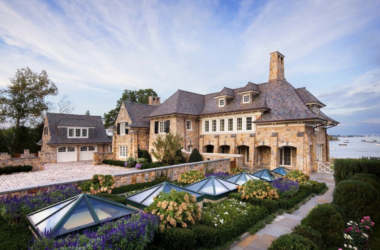 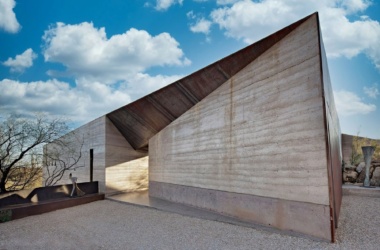