An architectural icon for sale in Palm Springs: Kaufmann desert house is back on the market for $16.9 million

The 5 things every real estate enthusiast should know about the iconic Kaufmann house by Richard Neutra. By Sadie Whitelocks. 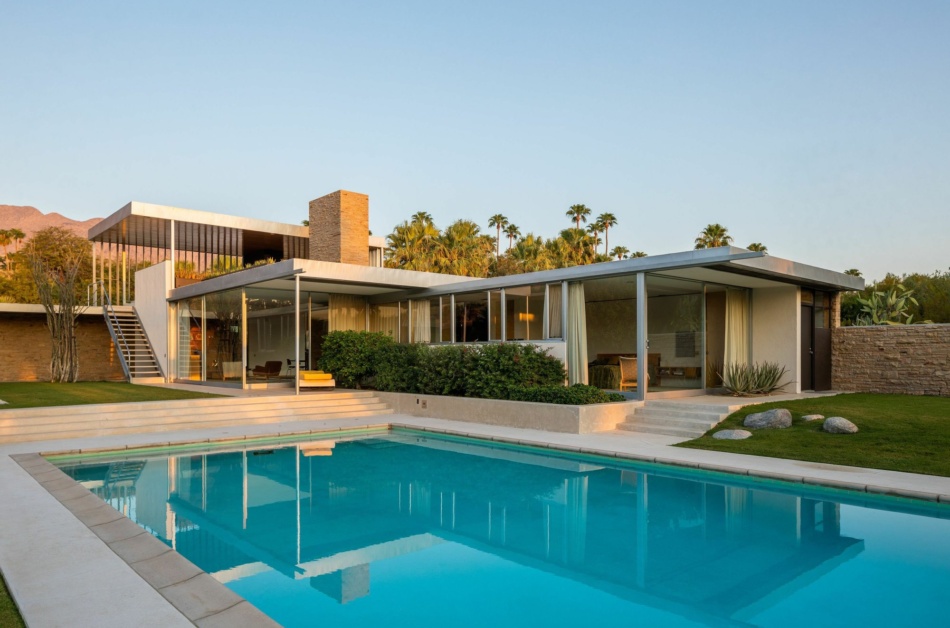 Thanks to department-store magnate Edgar Kaufmann’s decision to work with architect Richard Neutra, he went on to create one of the most important American houses of the 20th century, with his name living on to this day.

How choosing the right architects booked Kaufmann a place in history

Kaufmann carefully considered who to hire for his home-building project. He had previously enlisted Frank Lloyd Wright to build Fallingwater in a rural area close to his hometown of Pittsburgh and it instantly became a worldwide marvel for its unique cascading design.

But for his California project, Kaufmann wanted something a bit more avant-garde and after being advised by his son, Edgar Jr, he plumped for Richard Neutra.

The architect, who originally hailed from Austria and worked for Wright after he arrived in the U.S. in 1923, was known for his cutting-edge modernism and international style, with plenty of glass and steel used in the process.

Like Fallingwater (which is now a museum), the Kaufmann desert home, composed of sandy-colored Utah stone, was an instant hit and today mid-century modern experts deem it one of America’s most iconic homes. In 1996 it was designated a historic site by the Palm Springs Historic Site Preservation Board.

Without a doubt, the Kauffmann house at 470 West Vista Chino triggered a trend for slick modernist desert retreats, with Palm Springs evolving into a resort area for the Hollywood set. 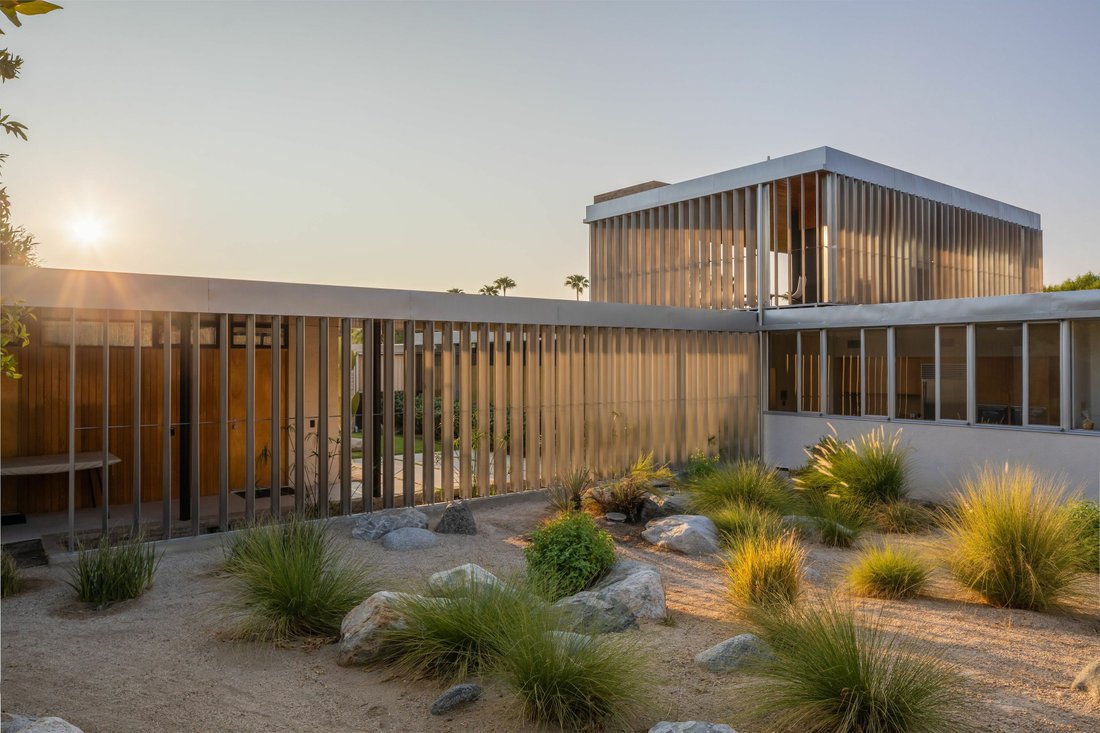 Kaufmann desert house, composed of sandy-colored Utah stone, was an instant hit and today mid-century modern experts deem it one of America’s most iconic homes. 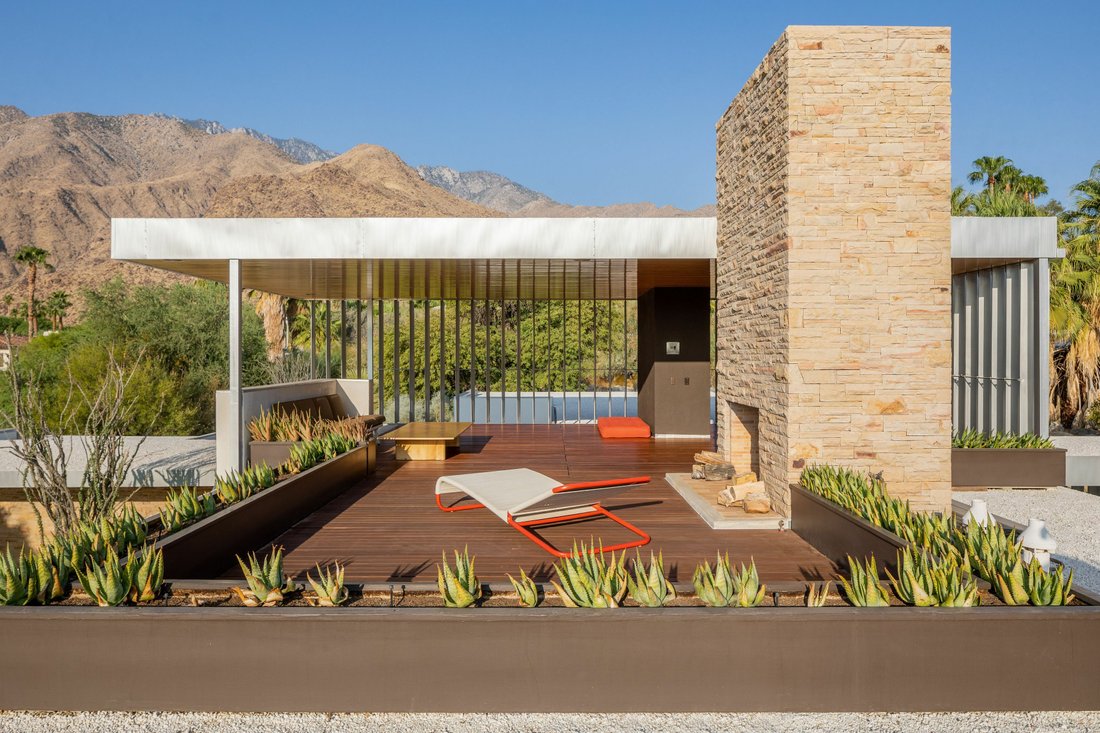 The flat-roofed abode is anchored by a hefty sandstone chimney, in a bid to harness the natural elements. Four ‘wings’ of the house are connected with covered semi-open ‘breezeways’.

Neutra, who designed more than 300 homes in his time, including several in Palm Springs, succeeded in creating a livable and inviting space within a modernist structure.

He created the 3,162-square-foot flat-roofed abode in a cross shape anchored by a hefty sandstone chimney, in a bid to harness the natural elements.

At the heart of the home is an airy living and dining room area which is orientated east to west to make the most of the sunsets and sunrises.

There are then four sand-colored ‘wings’ branching off, with covered semi-open ‘breezeways’ connecting the different spaces. Off the main living space, there is a kitchen, a master bedroom, and four guest bedrooms.

Floor-to-ceiling windows and sliding glass walls run throughout the property, which helps bring the outdoors in. The glass panels are lined with moveable metal slats which help provide shade during extreme heatwaves and protect the property during sandstorms. 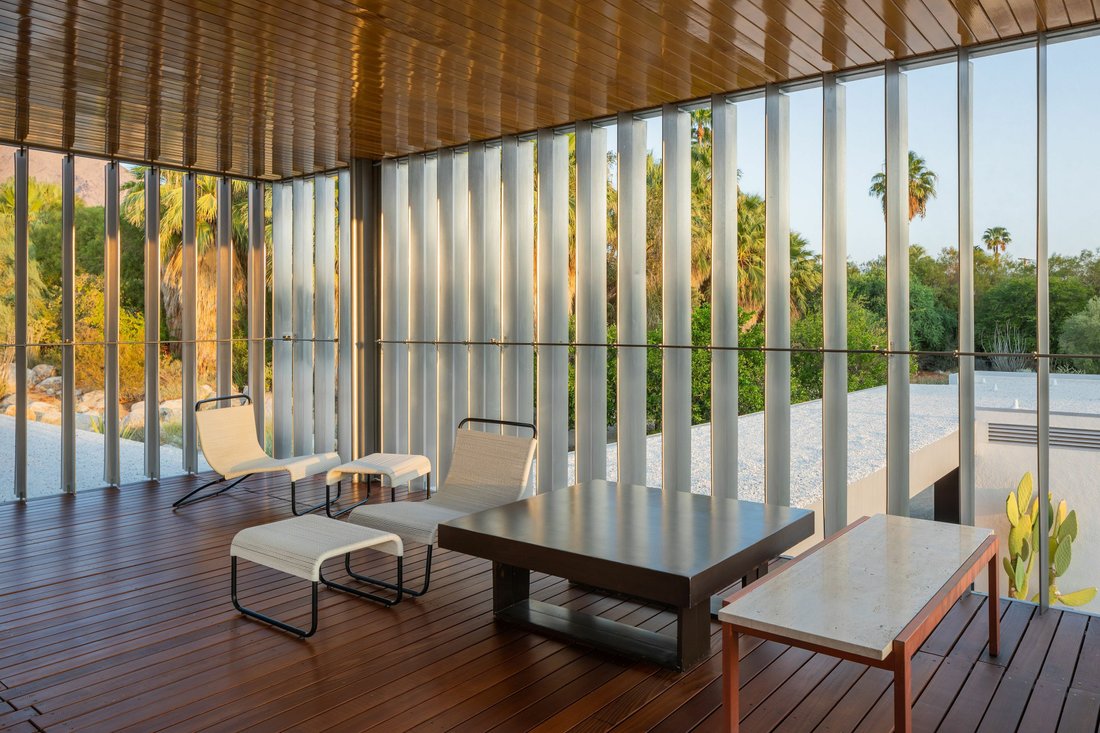 The glass panels are lined with moveable metal slats which help provide shade during extreme heatwaves and protect the property during sandstorms. 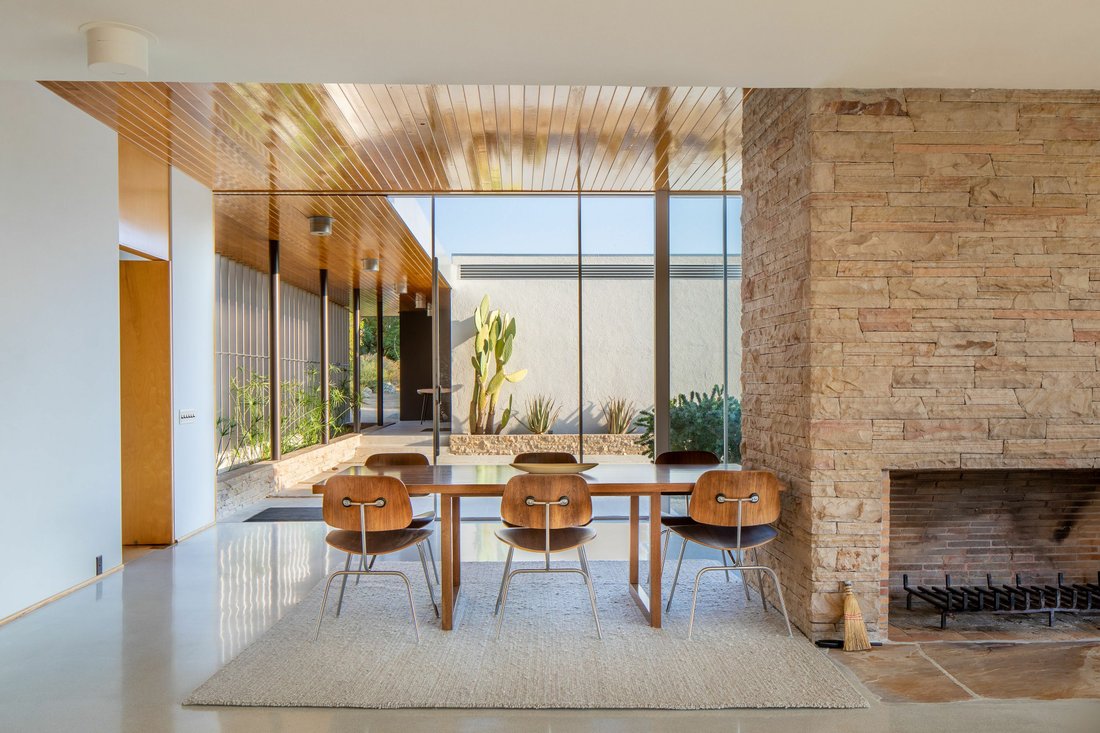 The grounds of the Kaufmann house include shaded patio spaces, swathes of manicured lawn, a tennis court, a swimming pool, and a rockery by the front gates.

Mature foliage, including towering palm trees and cacti, provide shade from the desert heat while offering privacy at the same time.

Today Palm Springs is peppered with copycat structures, but none stand out quite like the Kaufmann house. On Google, ‘floor plan’ is the most popular search term when it comes to the Kaufmann house, with people eager to learn more about its revolutionary design. 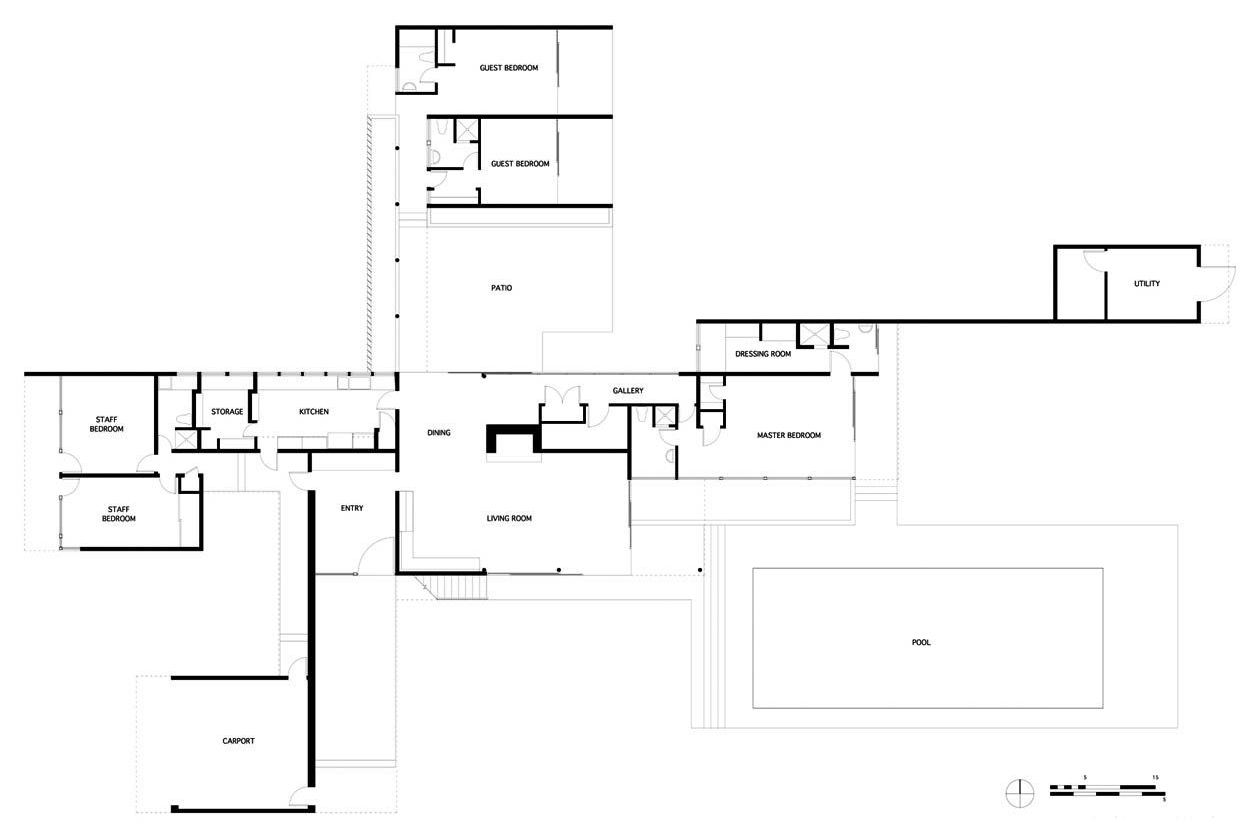 The priciest piece of real estate in Palm Springs

The Kauffman house is now on the market, offering buyers the chance to own a slice of architectural history.

It hit the market in October for $25 million, and while its price has since been cut to $16,950,000, the Kauffman house is still the most expensive home in Palm Springs.

Putting it into context, Bob Hope’s onetime home in the neighborhood went for $13 million in 2016.

The Kauffman house last went on sale in 2008 after the Harrises divorced. It was listed by Christie’s auction house in New York with a pre-sale estimate of $15 million to $25 million.

With the U.S. in a full-blown recession, the property went for just $15 million, plus $4 million in commission fees.

The deal later fell through for reasons that weren’t made public. It was then re-listed for a bargain $12.9 million – a 32 percent discount.

The current sale is being handled by Vista Sotheby’s International Realty. Listing agent Gerard Bisignano told Realtor of the property: “Not only was it groundbreaking, but the house is magical. There are a lot of great modernist homes. The Kaufmann home just stands out, it just does—both aesthetically and historically.”

The setting for one of the world’s most iconic photographs

After Kaufmann died in 1955, his desert home was left abandoned for several years before it went through several owners including famed singer Barry Manilow.

During this time, it was also used as the setting for one of the world’s most iconic photographs. 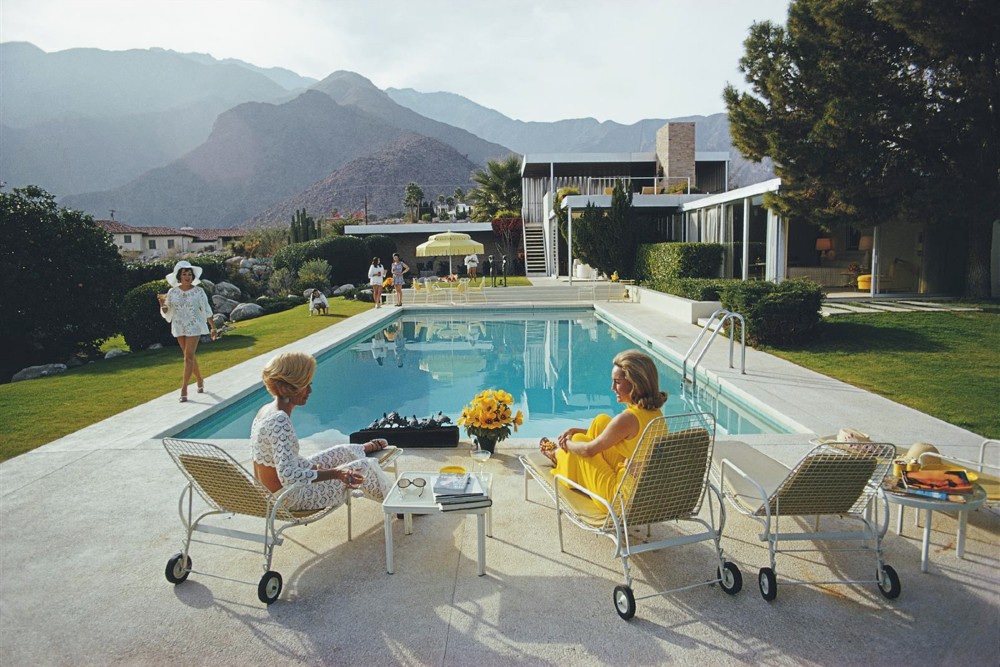 “Poolside Gossip” by Slim Aaron, 1970. The woman in yellow Nelda Linsk, then the owner of the Kaufmann home. 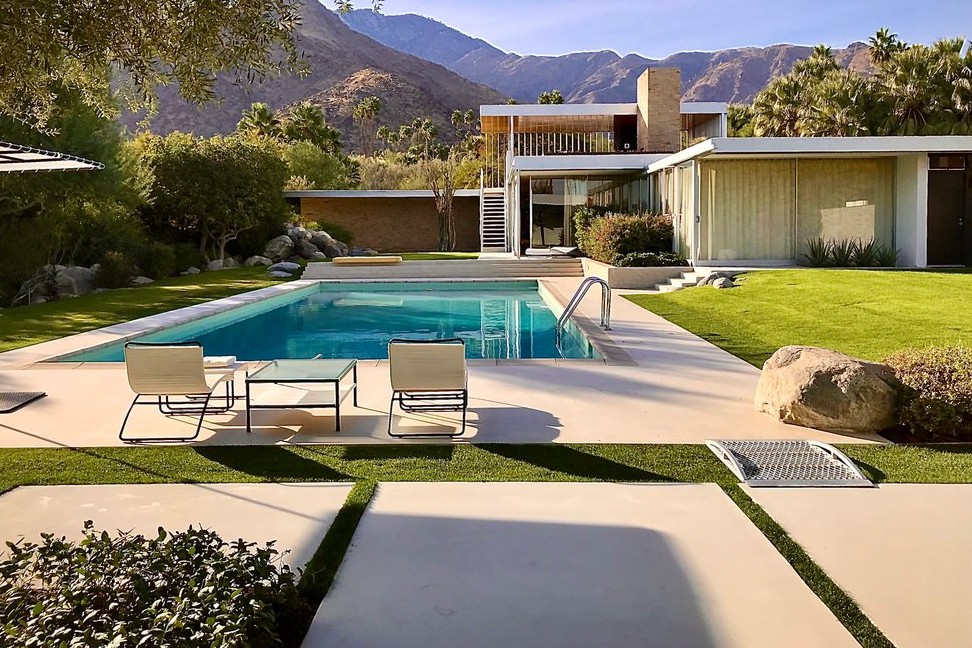 The woman in yellow is homeowner Nelda Linsk while her friend, lounging in the white lace, is Helen Kaptur, who was married to mid-century architect Hugh Kaptur. The third woman strutting towards them is actress, Lita Baron.

The low-slung Kauffman house can be seen in the background, with mountainous scenery beyond. The image, titled Poolside Gossip, has been reproduced the world over and can be seen printed on everything from tote bags to vintage posters.

Another celebrated image of the property was taken in 1947 by architectural photographer Julius Shulman, showing Edgar Kaufmann’s wife Liliane lounging alone by the water at dusk.

The moody black and white image was first published in Life magazine in 1949, on a two-page spread to accompany an article titled ‘Glamourized Houses’.

An award-winning restoration of Kaufmann desert house in 1990

As the Kaufmann house went from owner to owner, there were various alterations made with, among other things, the square footage expanded, an air conditioning unit added to the roof, wallpaper put up in the bedrooms, and a covering over the courtyard erected. However, these ‘upgrades’ changed the unique feel of the house.

In 1993 Brent and Beth Harris came to the rescue. Beth worked as an architectural historian and she and her husband went about restoring the Kaufmann house to its original glory.

They enlisted the help of LA-based architecture firm, Marmol Radziner, as it had recently worked its magic on Neutra’s Kun House No2 near Laurel Canyon.

Without Neutra’s original plans to go off, there was an exhaustive amount of research that ad to be done first. Never-seen-before photos of the house taken by Julius Shulman offered some clues, as did some original letters from Neutra to Kaufmann. 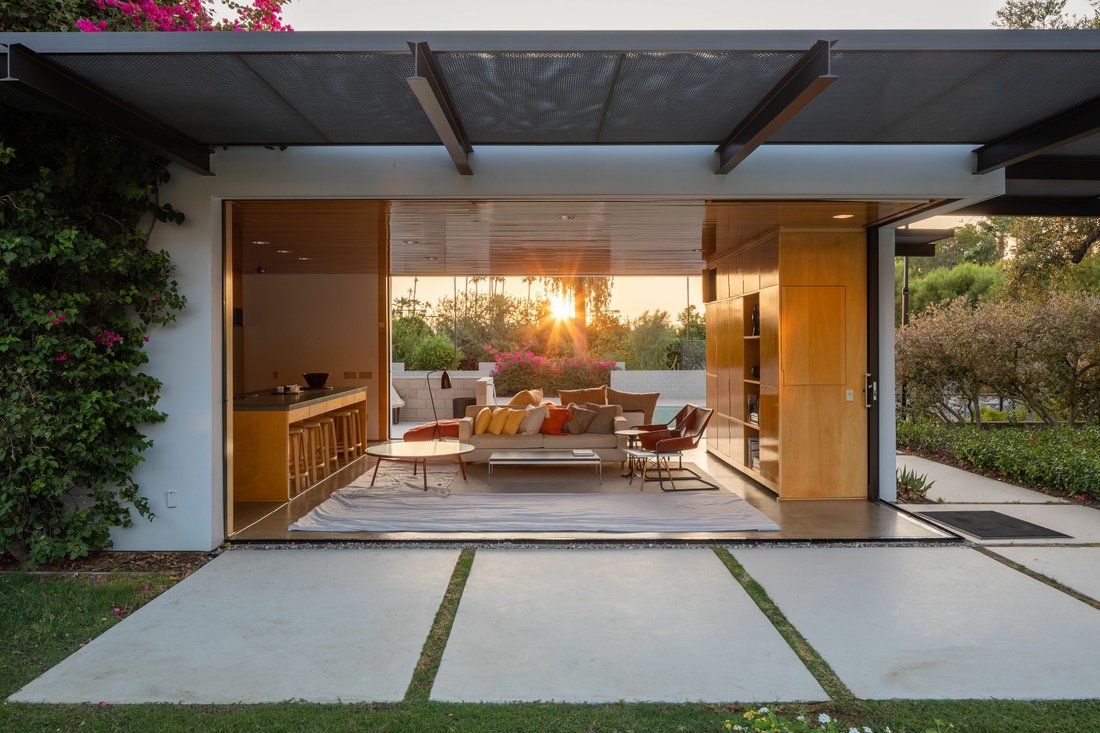 During the restoration, designers matched the grain of the birch-veneered plywood cabinetry original to the house and trekked to a quarry in Utah to source the original buff stone. 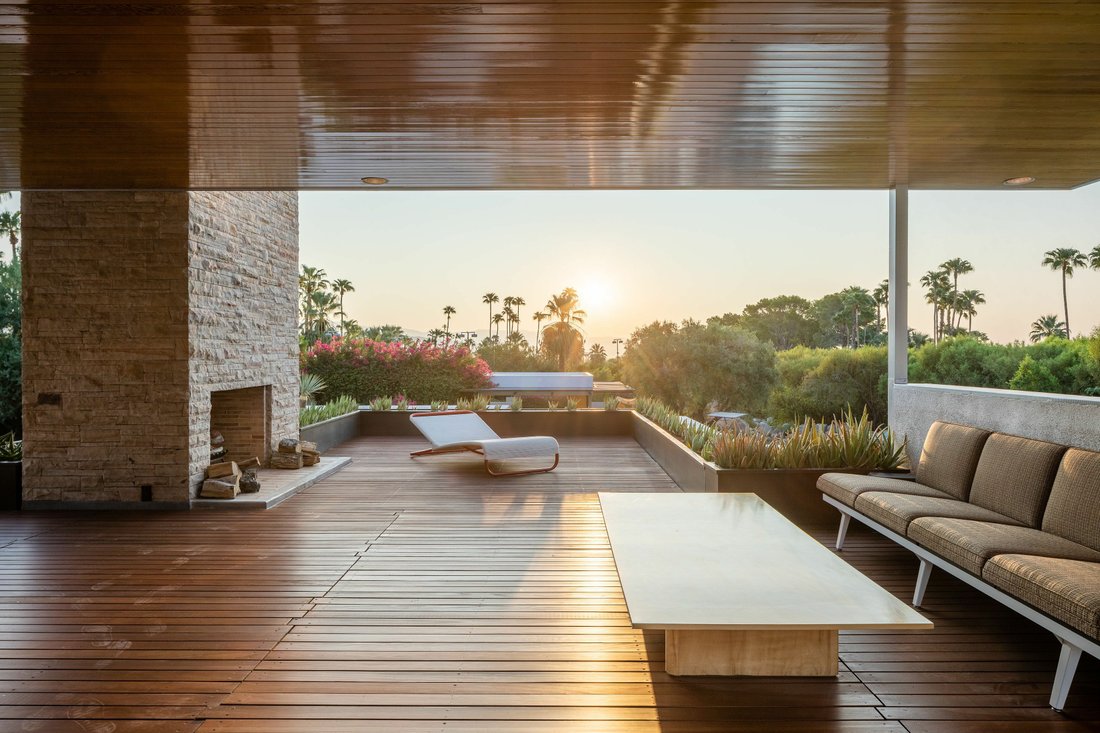 “The house is magical. There are a lot of great modernist homes. The Kaufmann home just stands out, it just does—both aesthetically and historically.” Listing agent Gerard Bisignano, Vista Sotheby’s International Realty.

Everything from toilets to door frames were reproduced and designers matched the grain of the birch-veneered plywood cabinetry original to the house. They even trekked to a quarry in Utah to source the original buff stone. The only addition was a pool house, but as the architecture magazine Dwell notes ‘it was designed to complement—never to compete—with the restored home’.

The meticulous restoration took five years in total. Ron Radziner, design partner at Marmol Radziner, told Dwell of the award-winning project: ‘We really were true to the original goals of Neutra and we tried to very authentically recreate and restore what wasn’t there and make it authentic as humanly possible.’ 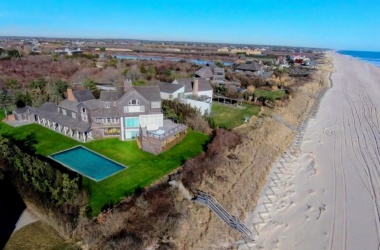 Handpicked Homes Real Estate
Top 1%: The 10 most expensive houses for sale in the booming…
What does $78,000,000 get you in The Hamptons, New York’s affluent waterside hotspot? 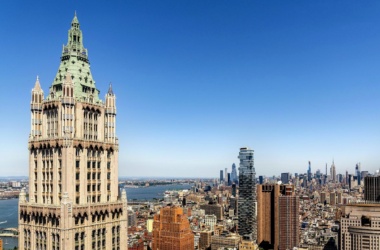 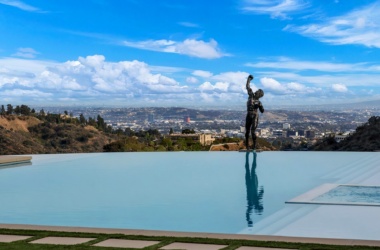