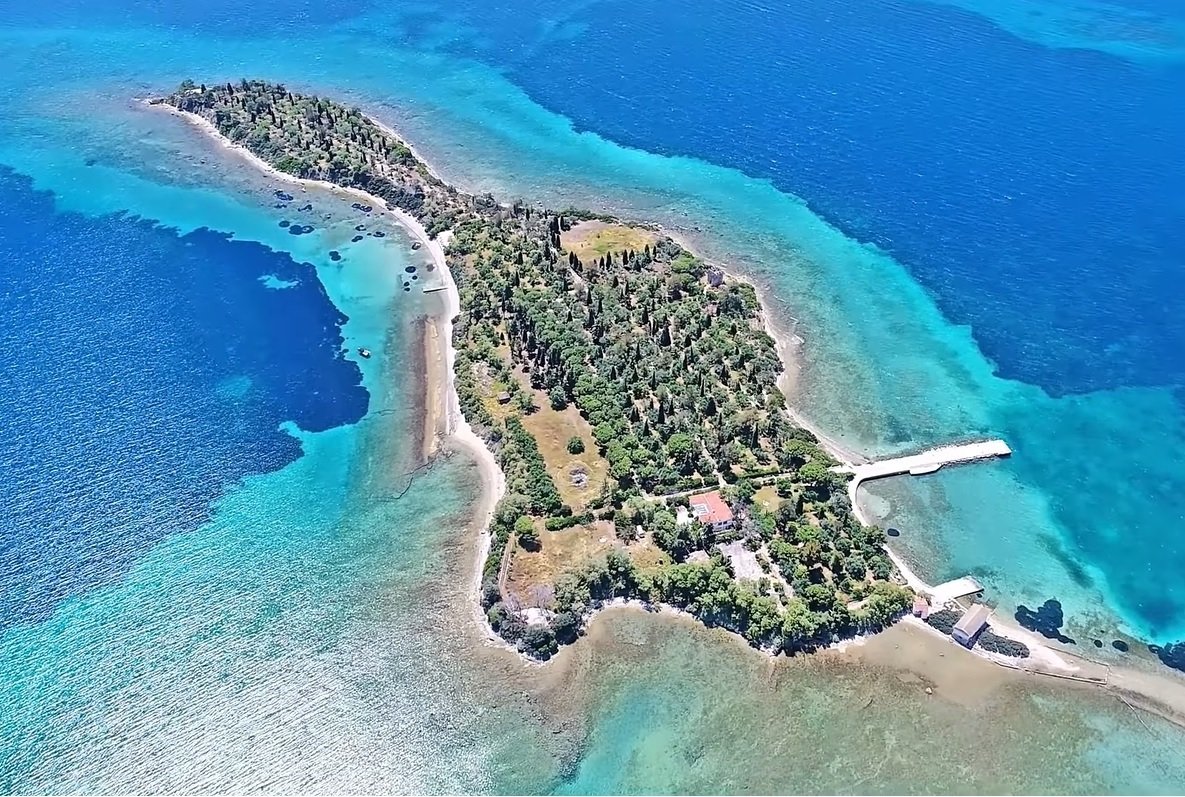 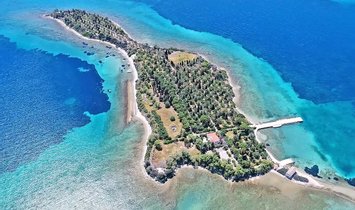 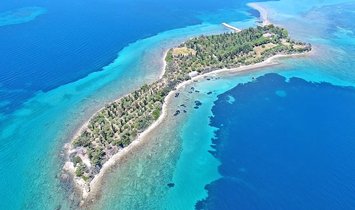 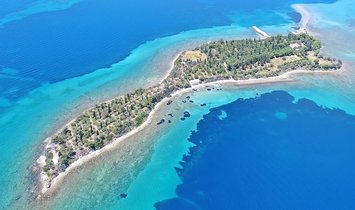 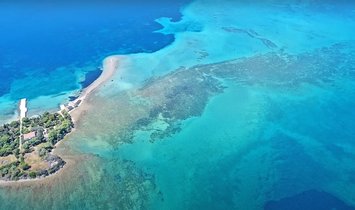 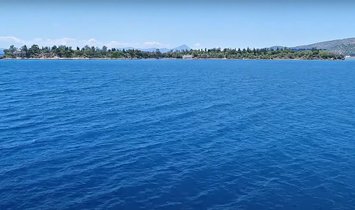 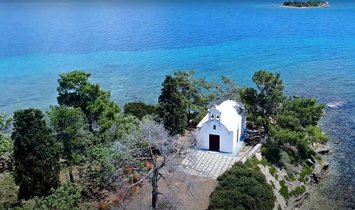 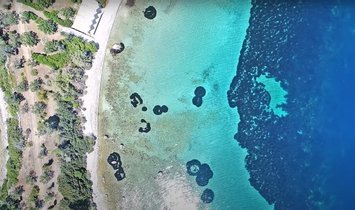 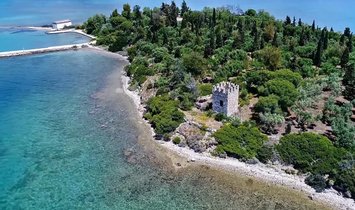 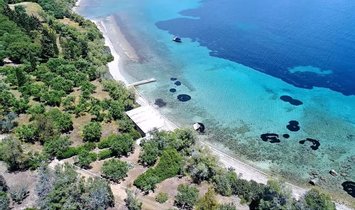 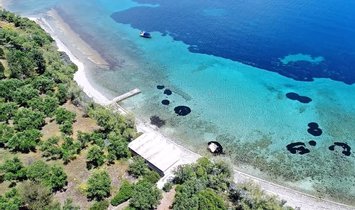 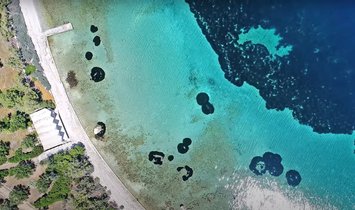 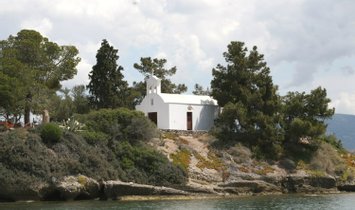 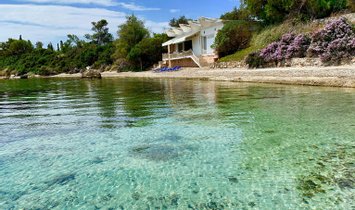 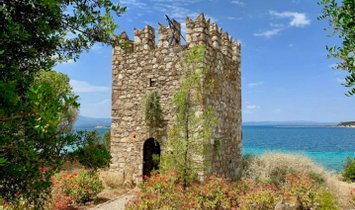 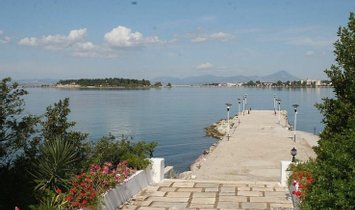 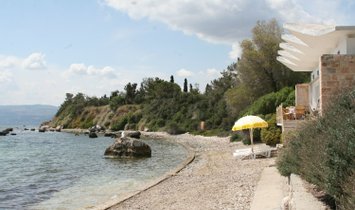 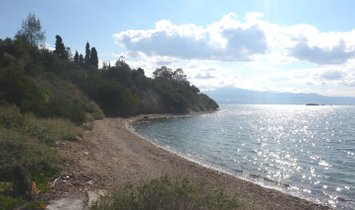 Private Island For Sale In Greece

Eretria used to be a very important city in ancient times. Today it is a very popular summer resort where every amenity for the daily and technical needs is available such as supermarkets, gas stations, motor repair services, boutiques, hotels, restaurants, bars, discos, including doctors, vets, and daily help for the island.

Trinity Island has roughly the shape of a guitar and covers an area of approximately 12 acres (48,000 sq.M.). Its maximum length is 650 metres and its width 150 metres. Its mean height is between 4 and 6 metres above sea level. There are rocks jutting out of the otherwise flat island.

The vegetation is very thick, consisting of 350 grown olive trees producing very good quality oil, enough per year to supply the family and many friends.

There are also 125 pistachio trees, a variety of fruit trees, among others pomegranates, apricots, peaches, almonds, plums and figs. There are numerous pine and cypress trees around the perimeter of the island, as well as hundreds of ornamental bushes such as oleanders, bougainvilleas, hibiscus, geraniums and various other shrubs which are friendly to the Mediterranean climate. All these are spread evenly along the main paths of the island.

A water well has been drilled on a 700 sq.M. Plot close to the shore of Eretria, opposite Trinity Island. This plot is also owned by the family and is included in the sale of the island. A water tower has been erected over the well, at a height of 17.3 metres with a production capacity of 45 m³ of water per hour. An electric pump automatically replenishes the tank whenever the water level drops below a certain point. The said water tank is connected with Trinity Island through pipes of a total length of 1,900 metres, of which 1,200 are laid underwater, attached with chains on cement blocks at the bottom of the sea. The remaining 700 metres of pipes are to be found on the island itself. The water thus reaches Trinity Island through gravitation attained by the height of the water tank.

Caution has been taken in case of malfunction of the electric pump in the form of a reinforced concrete water tank, of a capacity of 150 m³, situated on Trinity Island itself, above the staff house. It is designed to provide the island with water, pending any kind of repair of the Euboean-based water pump.

Furthermore, a full network of plumbing and water pipes exists on the island which provides for numerous water outlets for adequate watering of almost its entire area.

The water is not very pleasant in taste but by no means health hazardous. It is used for all necessities except to drink. Most of the island is automatically watered.

Two Lister Diesel generators, housed in their own small buildings, and two smaller diesel generators close to the main house generate electricity which provides for the lighting and all the household appliances of the main house, the staff house, the beach house, the fortress and the chapel as well as the roads, the paths, and the piers, and most of the vital areas of the island.

It consists of a living room with fireplace, a dining room and a kitchen, 3 double bedrooms, 1 single bedroom with 2 bunk-beds (all with large wardrobes), a bathroom and a shower room, both with WC.

Sand-coloured tiles are laid out on the entire floor.

There is no central heating or air-conditioning but there are heaters and fans in every room.

The basement, also 115 sq.M., consists of a laundry room, ironing room, huge storage room, food cellar and wine cellar. All the above rooms are fitted with numerous closets, cupboards and storage racks.

On the west side, there is a lovely large lawn in front of the house, ideal for outdoor dining and entertaining of at least 50 seated guests, and a large paved area on the north side of the house, suitable for large parties and celebrations of easily 200 seated guests.

Built in 1963,83 sq.M., a ground floor consisting of 2 bedrooms, a sitting room, a bathroom and a small kitchenette. The aforementioned reinforced concrete water tank, 8 metres high, is built on top of the staff house.

Built in 1960,71 sq.M., directly in front of the sea, consists of a large living/sleeping area with bamboo furnishings, bar, 2 sofa/beds, dining veranda, small kitchen, two shower rooms, one with WC, and a storage room. Sand-coloured marble tiles are laid out on the entire floor, and the house is fitted with large wardrobes. The beach house comfortably accomodates two guests or a bunch of teenagers with sleeping bags!

This beautiful church was built in 1963. The altar space and the floor are of white marble. Part of the interior is painted by the famous Greek artist Spyros Vassiliou.

This 17th century watchtower lies on the west side of the island. It has been reconstructed at some point and houses a tiny studio on two floors joined by a mini revolving staircase.

The view of the Euboean gulf at sunset is magnificent. A mini-chapel built by fishermen is very close-by.

7. The Boat House can house up to three boats and relevant nautical equipment.

Two piers are on the west side of the island. At the long pier yachts up to 1.5 metres deep can moor. The other one is square and low, ideal for ferry boats if need be, and can also be used for helicopter landings.

The third pier is built on the east side, close to the beach house. It is mostly used for water or jet skiing.

This is situated on the north-eastern tip of the island, in the shade, paved with stone mosaic. Ideal for lunches or evening barbecues, it can seat up to 30 guests.

There is a vegetable garden close-by.

There are three sandy beaches on the island.

The main one is in front of the beach house on the eastern side. There is another one close to the main pier on the western side which also has an outside shower. A mini beach is located below the barbecue area on the north-eastern side of the island. However, there are no stairs leading to it.

There is fun fishing all around the island. There are no large fish, but crabs, whitebait, mussels, clams and shrimps are plentiful all year round.

The Roads And Paths

Three main roads with a total length of 1,100 metres have been built to connect the dwellings mentioned above and most of the island as well. There are concrete pavements on both sides. The roads are bounded by thickly planted shrubs on either side, in blossom most of the year. The central road runs across the island and is 650 metres long and 3 metres wide.

Trinity Island is ideal for fishing, water-skiing and sailing and serves as a nature-friendly, beautiful and idyllic relaxation spot.

The island is free of mortgages, and all the necessary documents and permissions from the Greek Government for a sale can be provided. A building permit for 400 sq.M. Is available. All the family owners have agreed to this sale.