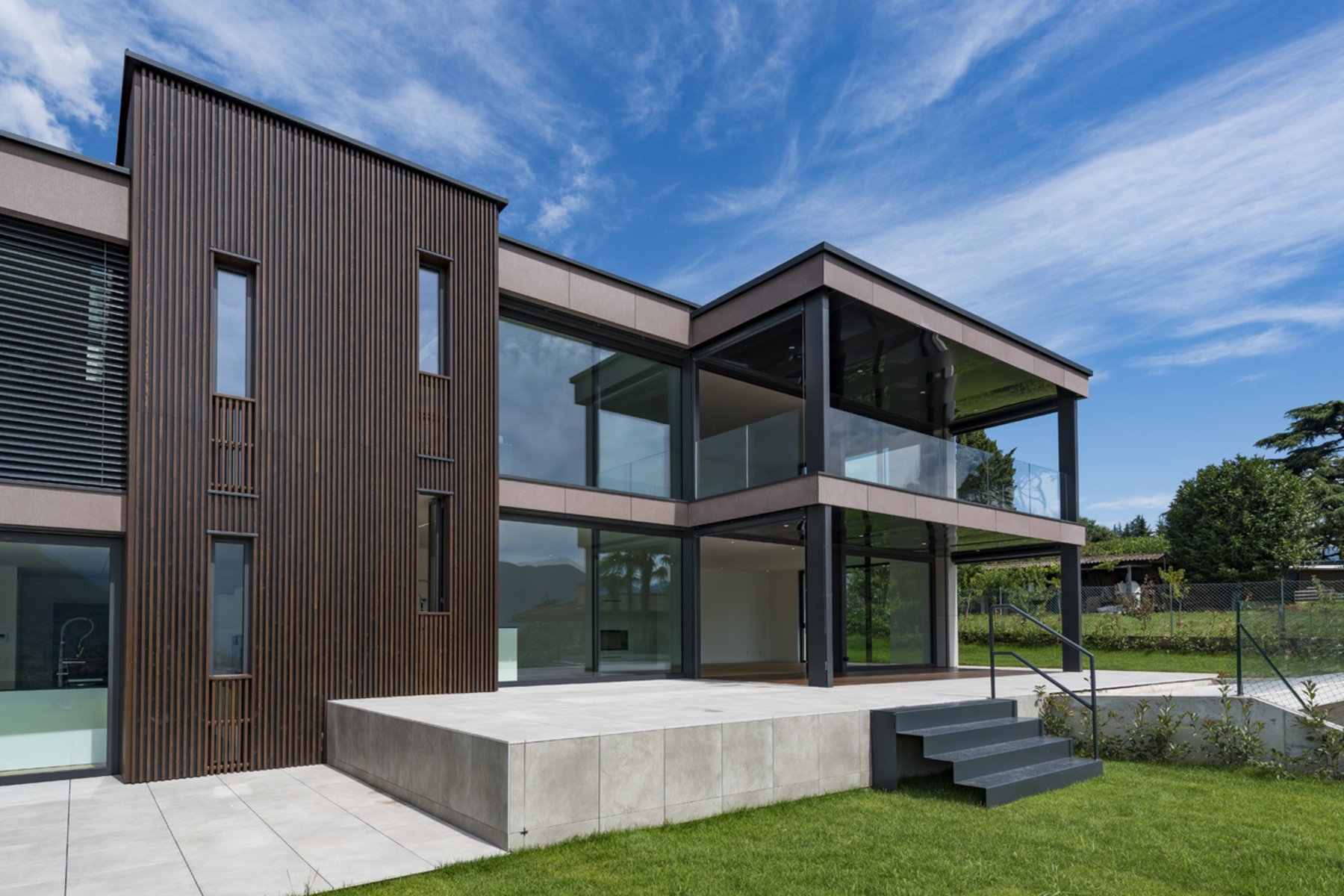 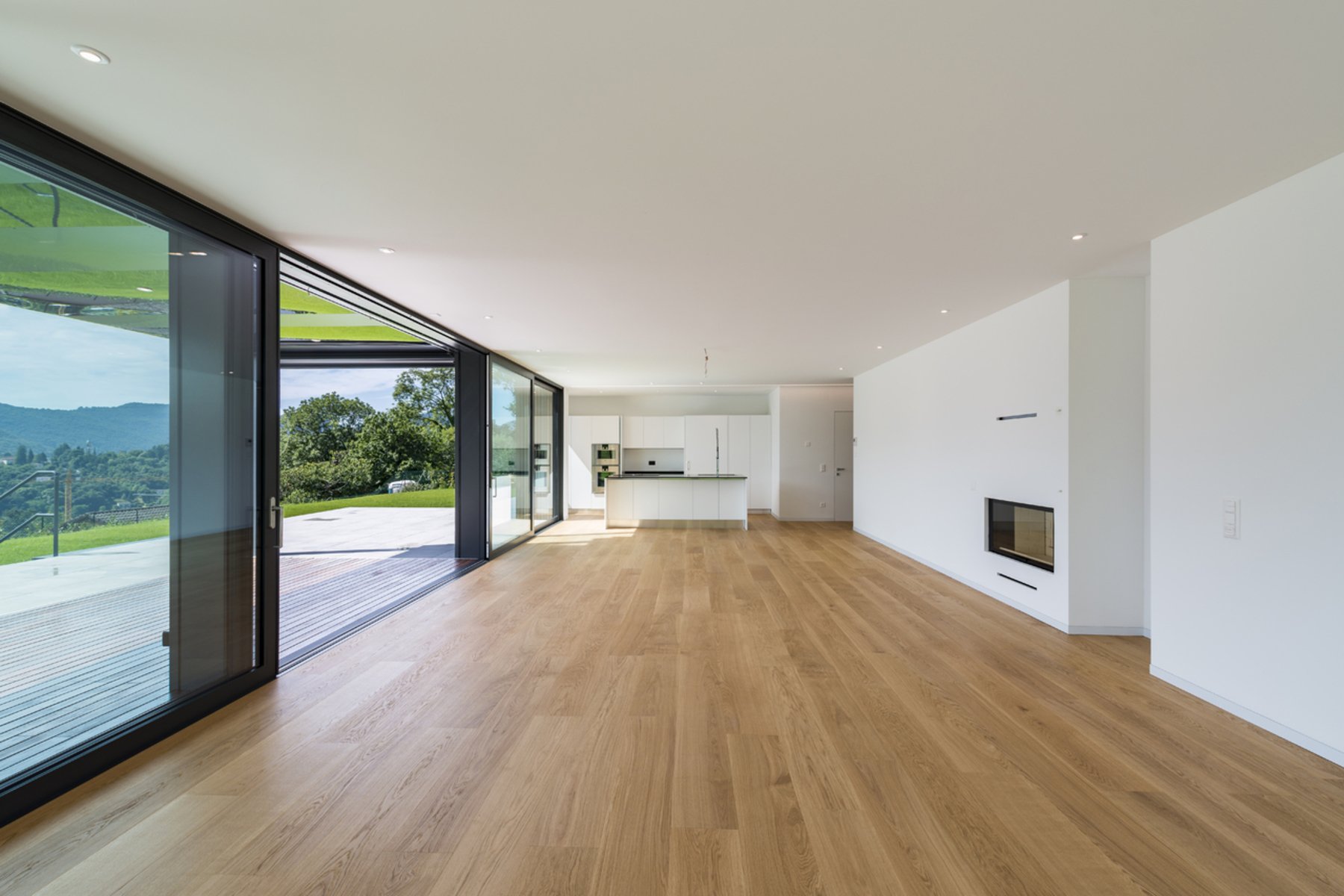 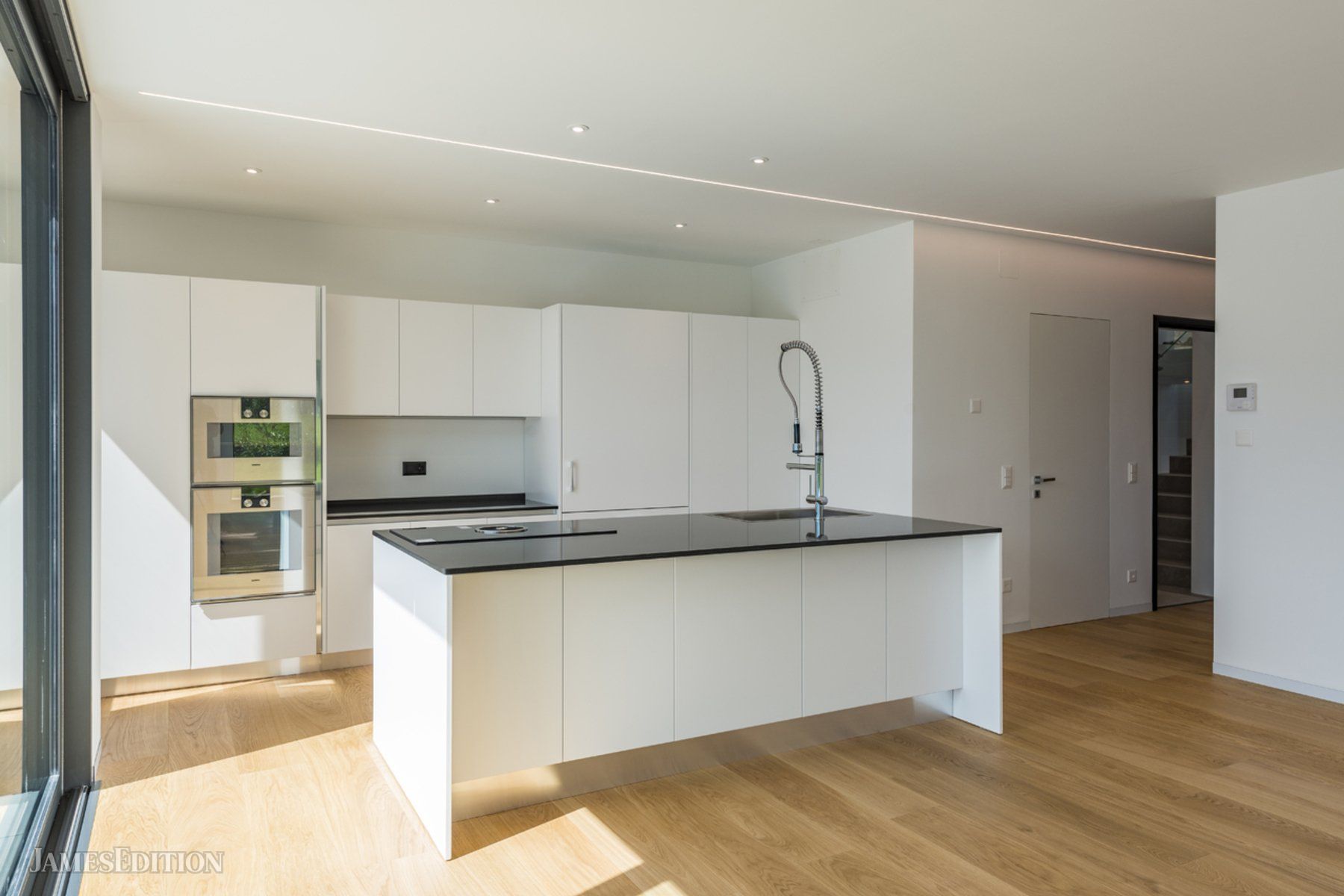 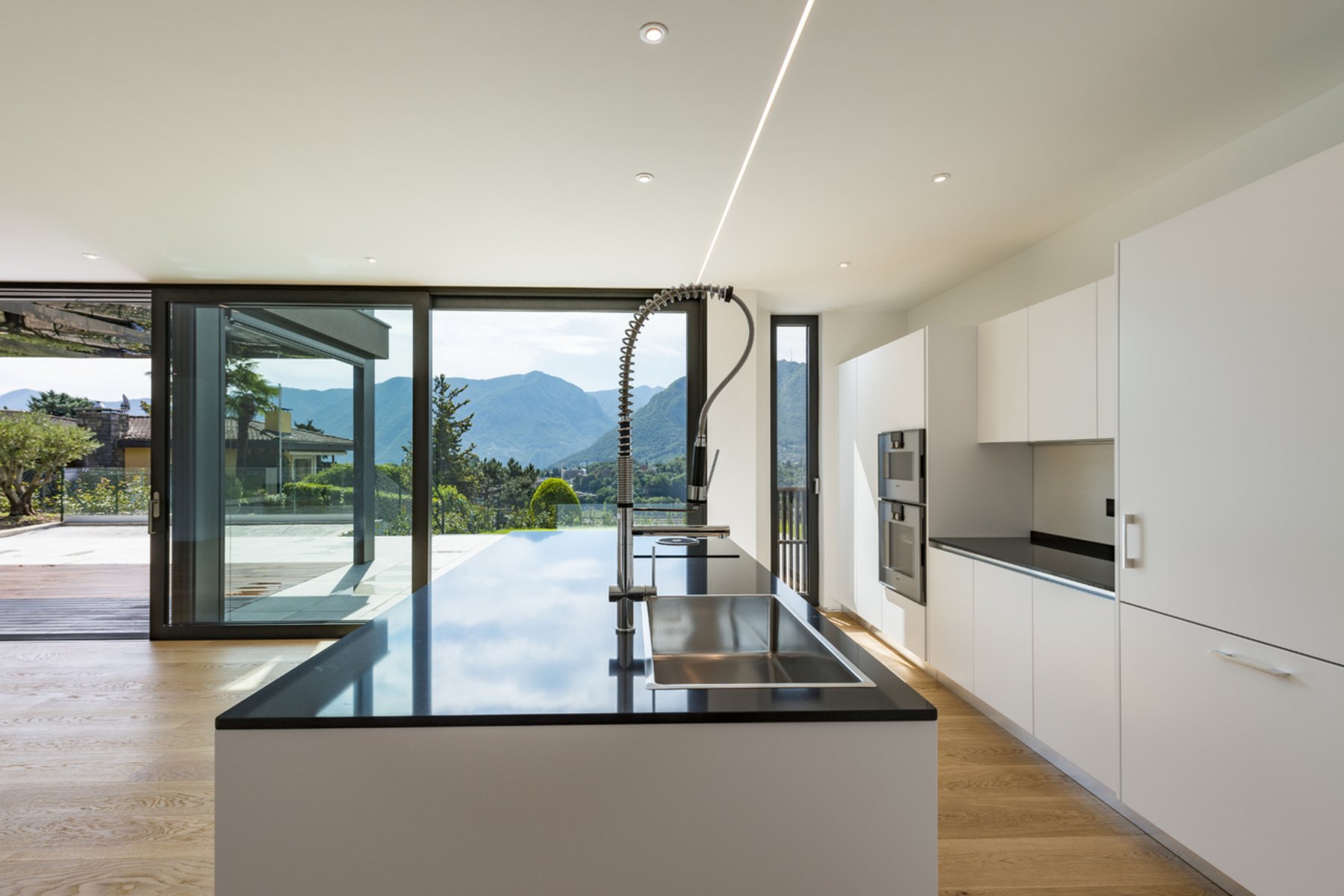 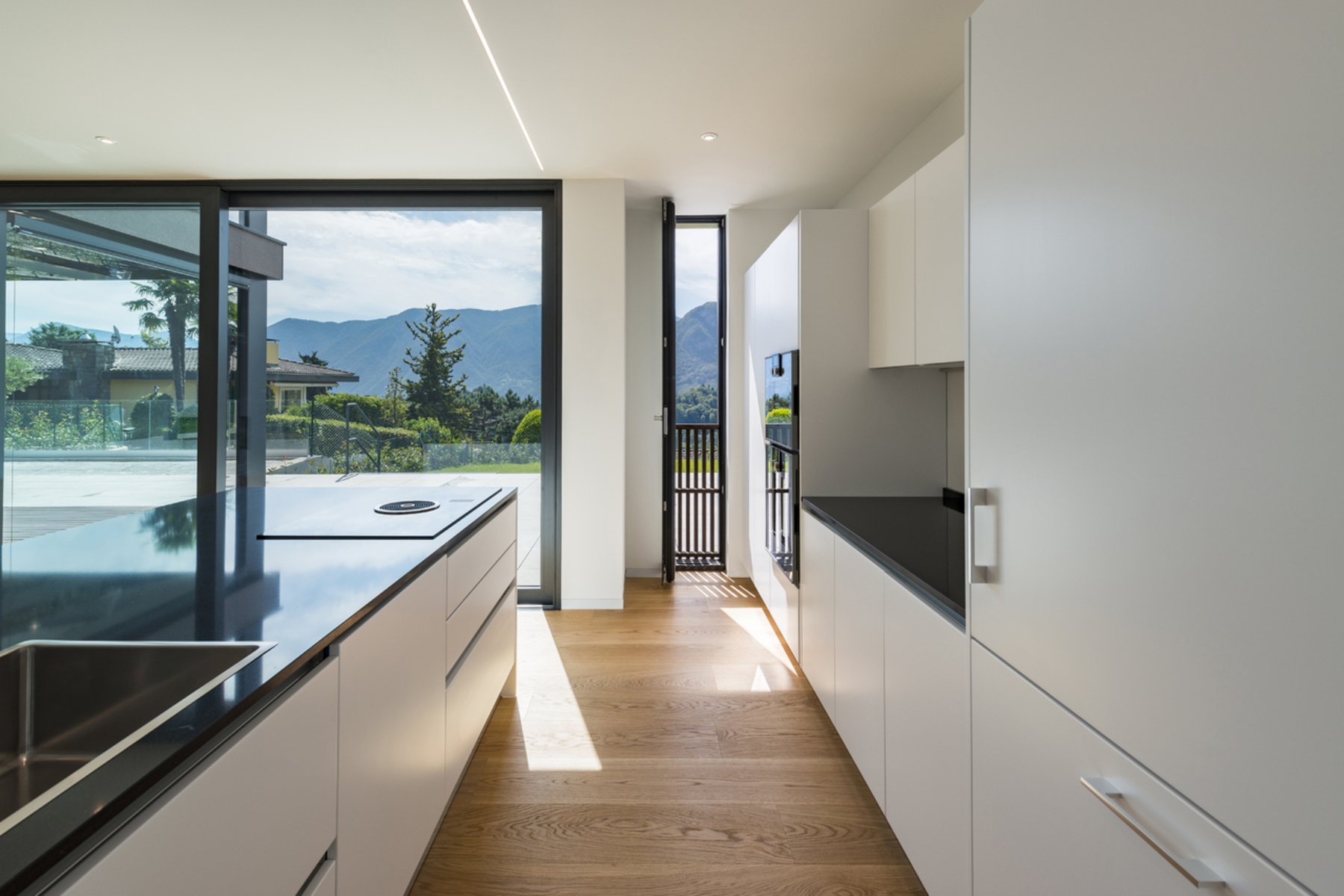 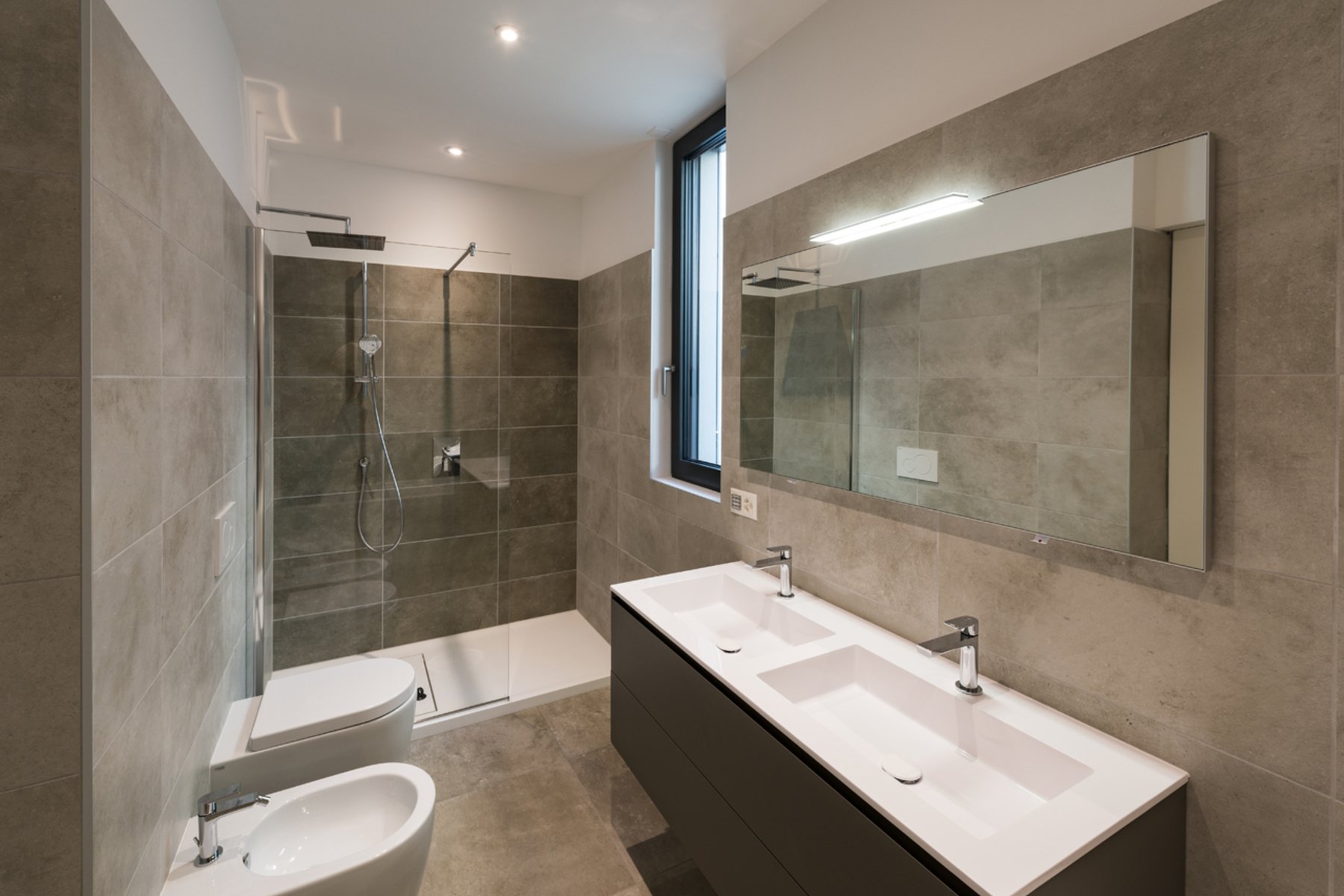 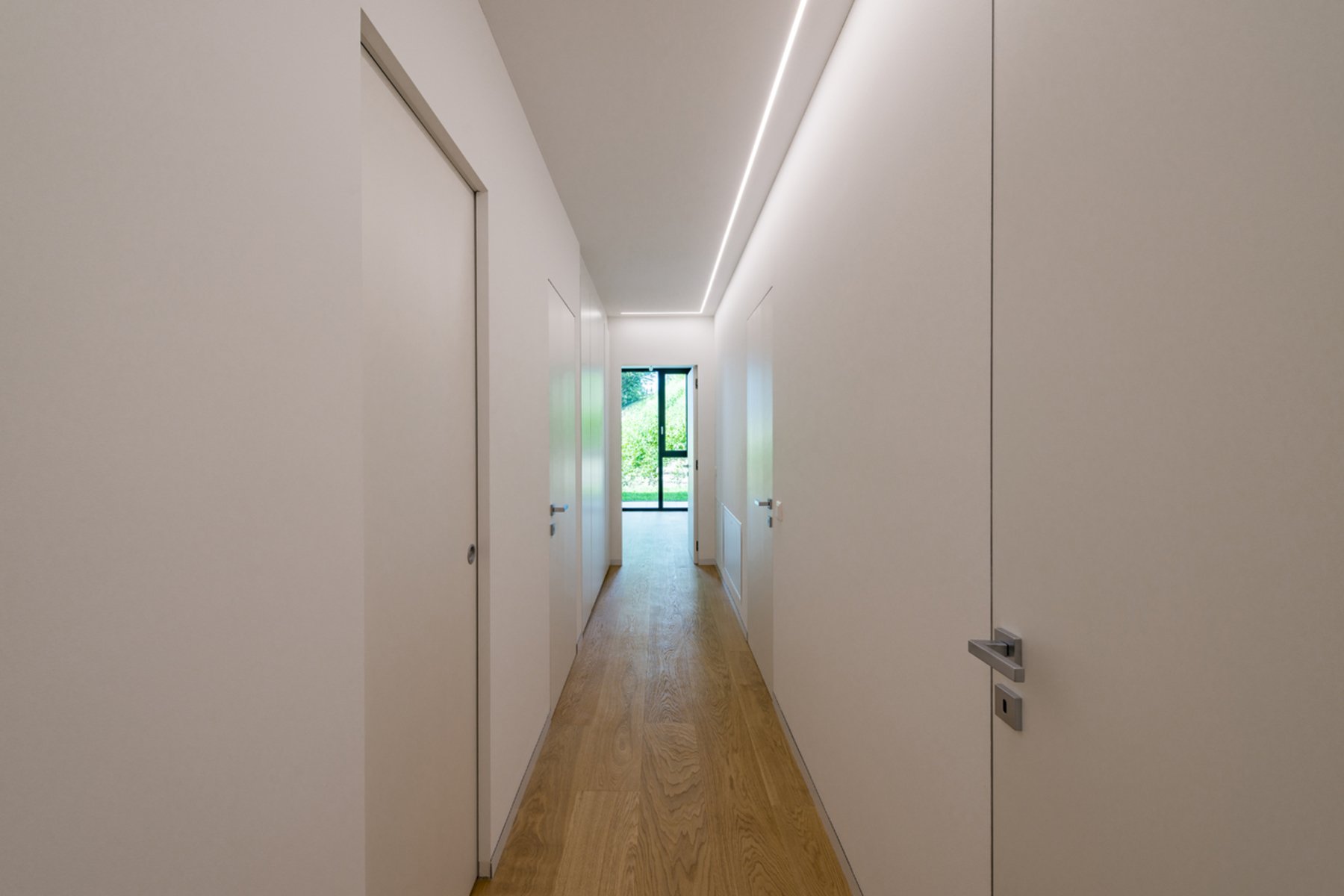 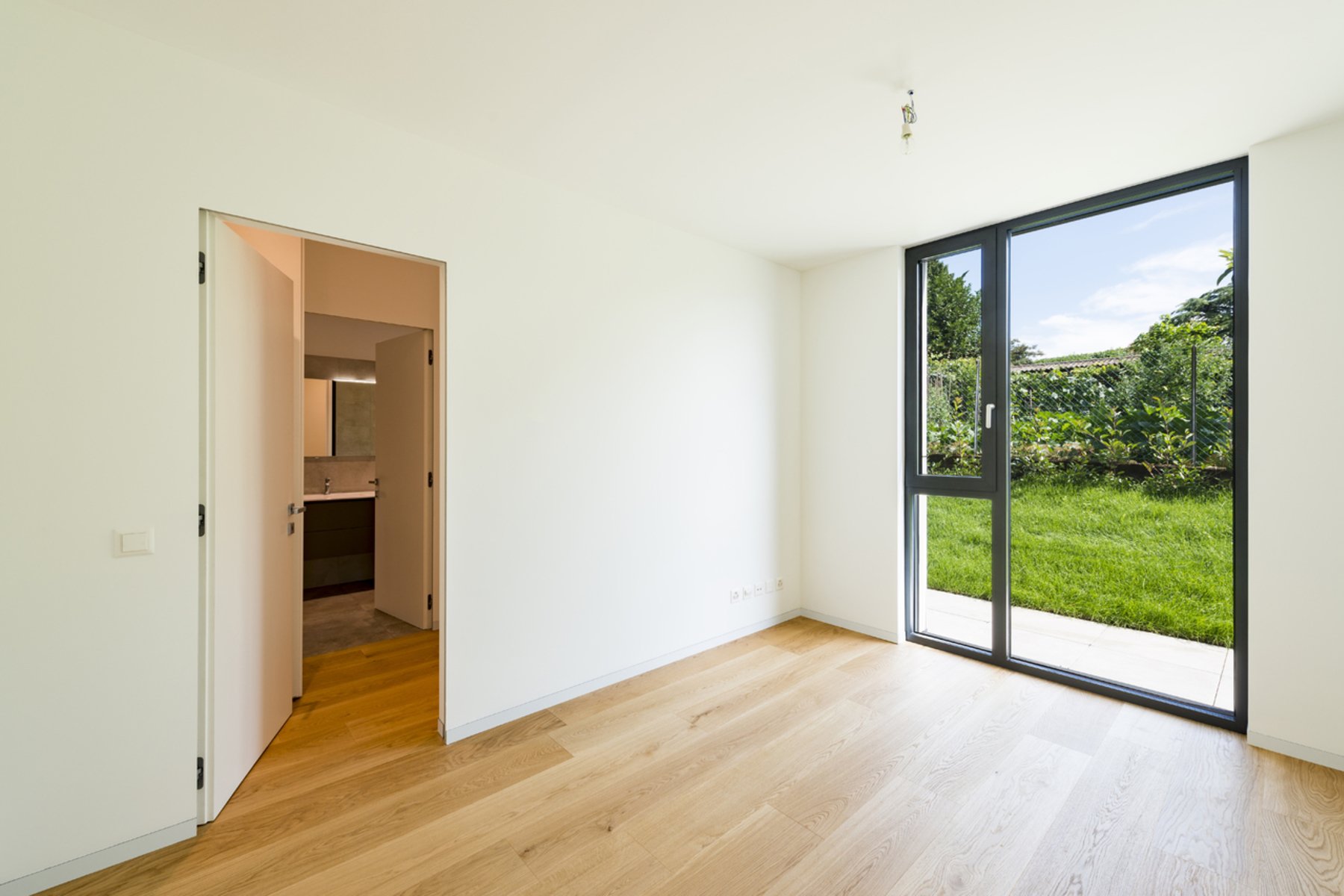 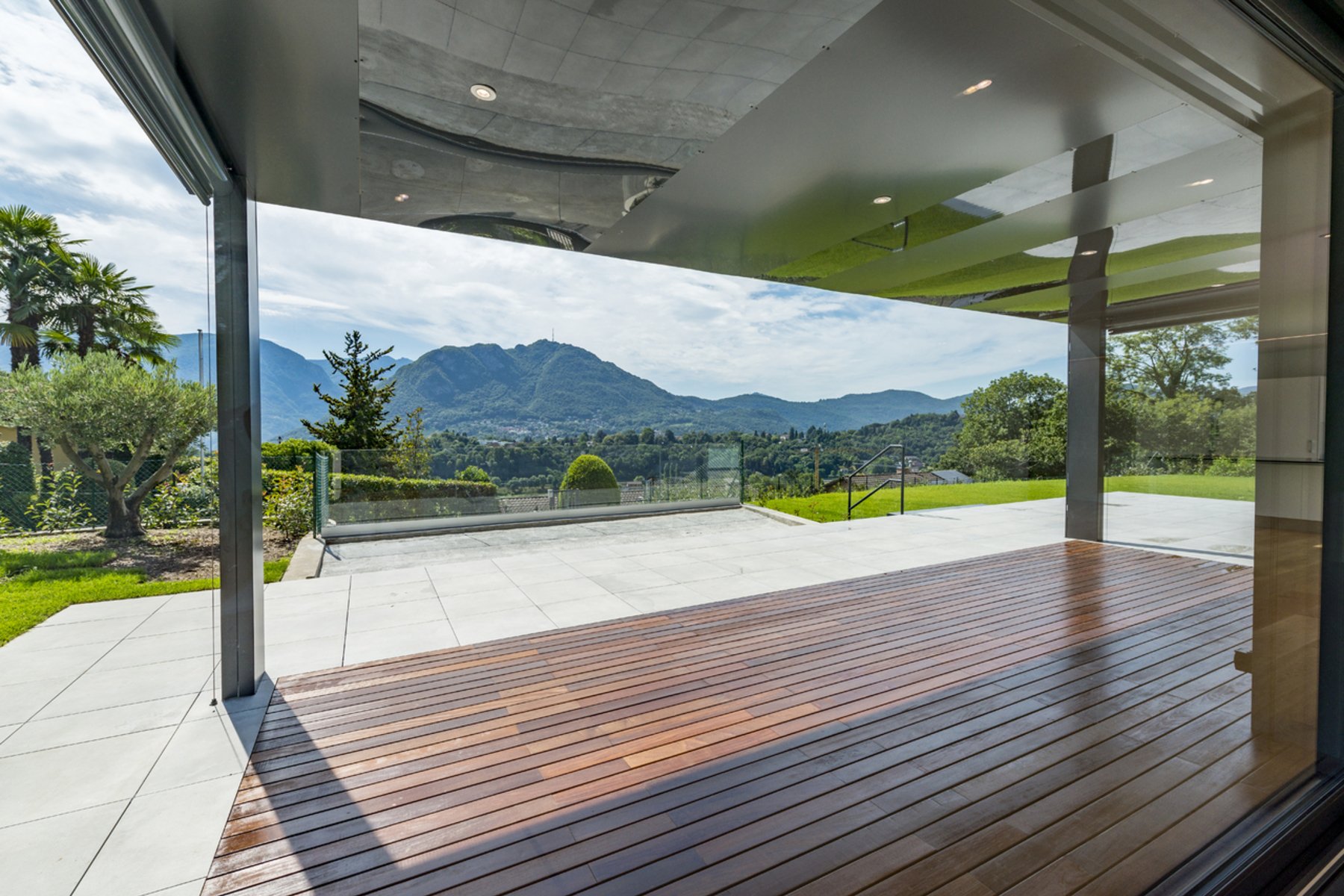 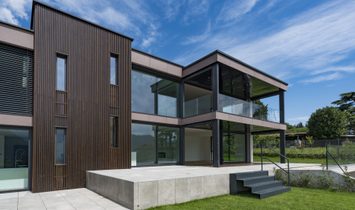 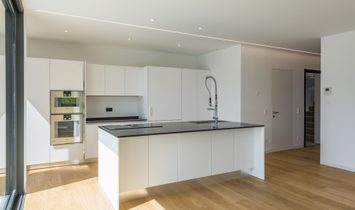 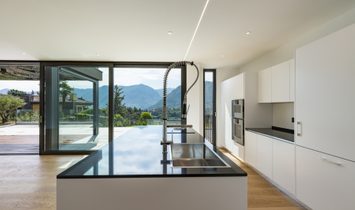 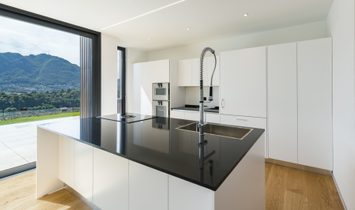 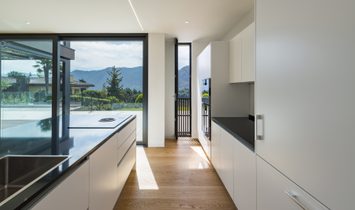 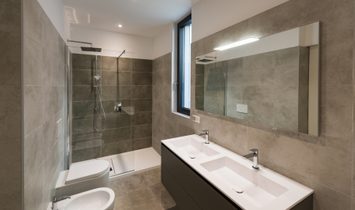 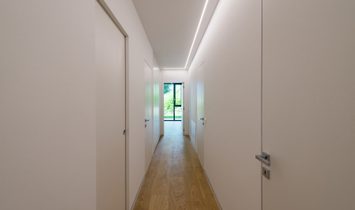 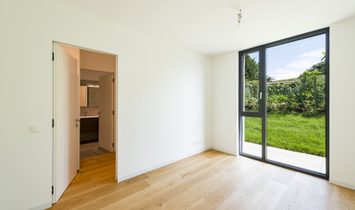 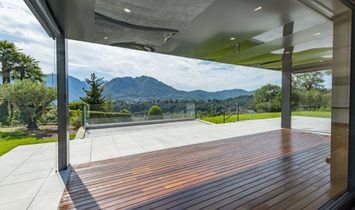 Residenza Leon is located in Lugano's Breganzona residential district, in Via Leoni, amid signature villas.
The Residenza faces southeast as regards Breganzona Hill and it faces Lake Muzzano, with a broad view of the Gulf of Lugano's picturesque mountains. The area is privileged in terms of sunlight exposure, day-long and year-round.

The high-end building has two storeys and is made up of 4 apartments, each with the same square-metre area and sunlight exposure. The building is made up of two units that are connected to each other by an armoured-concrete structure that houses the staircase, the lift, and part of the kitchens.

The ground floor has two apartments with broad covered terraces and solid-wood decking extensions (IPE) beyond which there is a garden. The two apartments are at slightly different levels in order to afford both a slight animation to the architecture's visual impact and greater privacy.

The same concept applies to the two first-floor apartments. These apartments too have broad terraces and excellent views.
The basement is accessible from a private road connecting to Via Leoni and has 10 parking spaces, a bicycle area, 4 cellars and an electrical-system area.
The building has been designed so as to meet the highest standards of thermic isolation and, therefore, so as to reduce heating costs: from the fixtures (Schüco) to the walls (a high thermic resistance modular pre-fab system) to the roof. The latter, besides being insulated according to high-performance standards, is greenery-covered for improved thermic insulation and a better evacuation of rain water.
On the roof, within the casing created by the central armoured-concrete module, there will be flat tubular solar collectors that will satisfy the supply of hot water year-round. Roof windows on the first floor will let natural light in.

Floor-heating (serpentine) is fed by an air-water heat pump and each apartment has its own heating metre.

As regards the finishings, beauty and quality have been the guiding principles adopted in the careful choice of materials. In fact, the entire structure is covered with composite, cementitious material pre-fab panels manufactured by the prestigious Austrian firm Rieder. The central module, instead, is covered with larch laths treated for weather resistance.

Indoor floors are made mostly of top-choice natural oakwood while bathroom floors are covered with a prestigious porcelain-effect grès. The outer structure has anti-intrusion lamellar blinds and elegant compound-glass safety rails that allow for the continuity of the broad view afforded by the daytime areas.


The electrical system will be entirely commanded by a Swiss domotics system (KNX, switch-operated or operated by an especially programmed Ipad).
Read more

Alfred Küpper
Show phone number
Thank you!
Your message has been sent to the seller. They will contact you soon.
Something went wrong...
We were unable to send your message to the seller. Please try again or contact us. 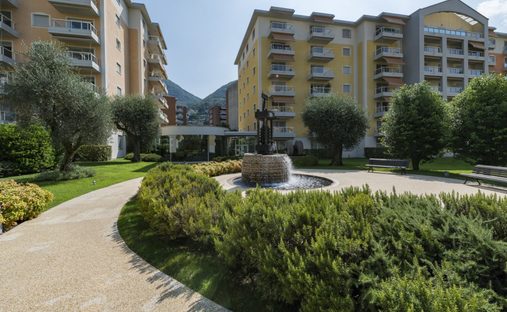 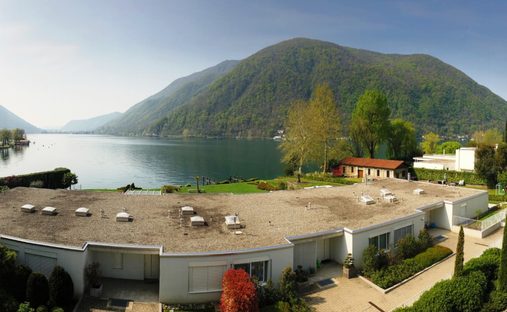 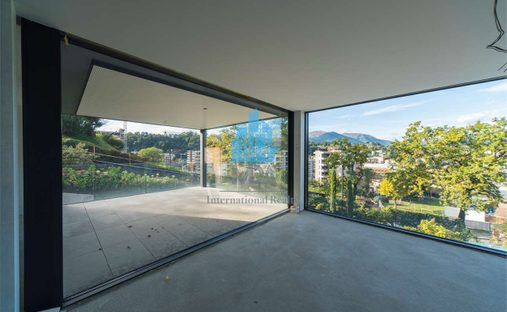 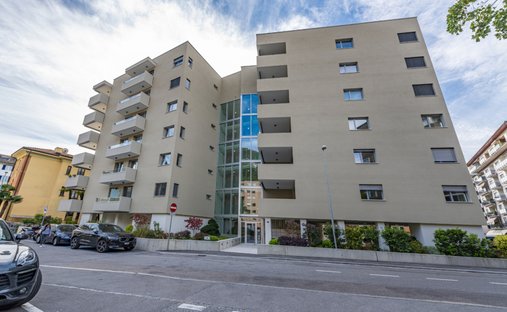 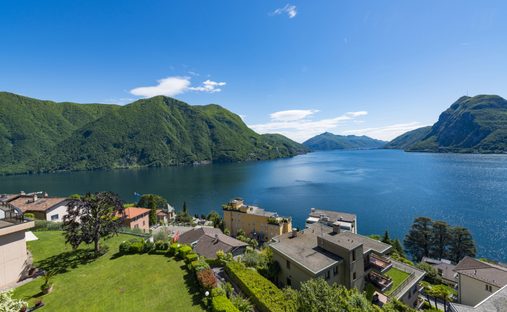 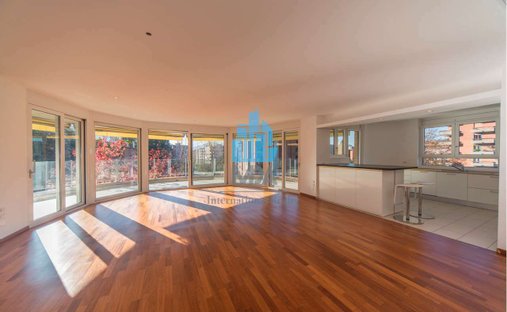 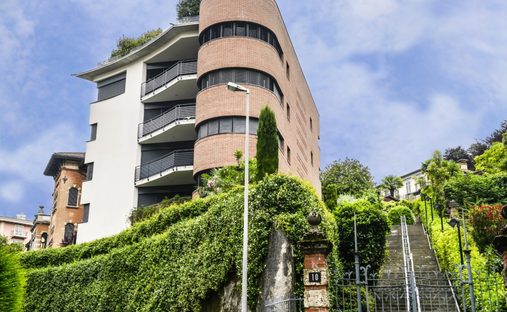 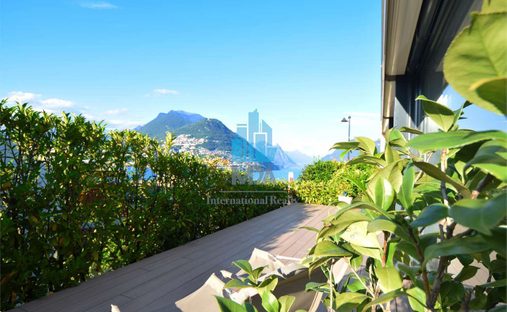 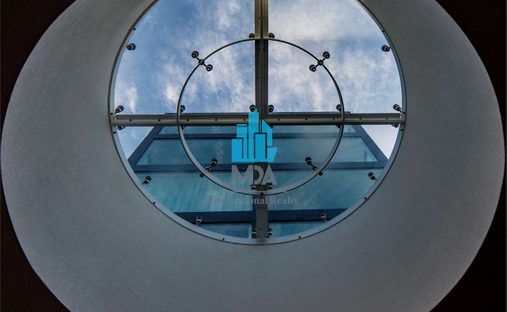 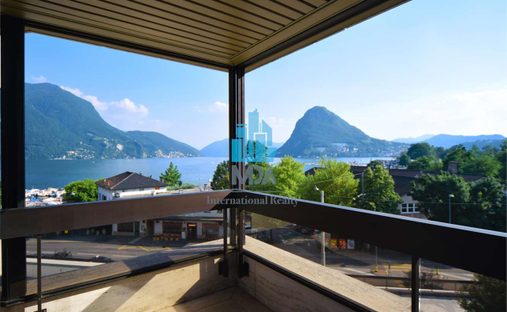