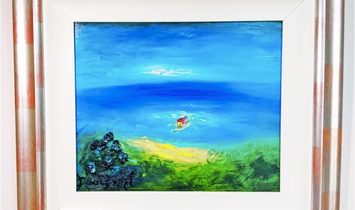 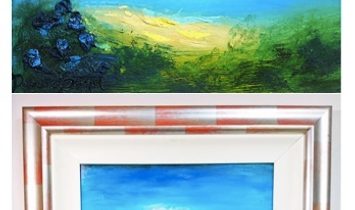 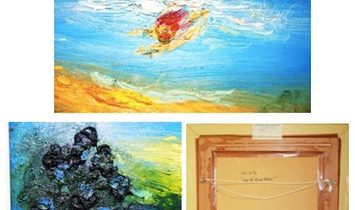 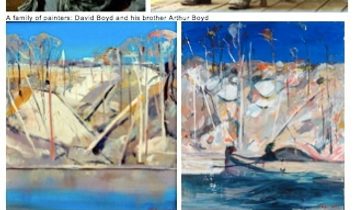 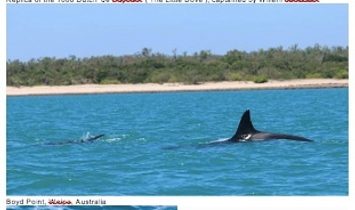 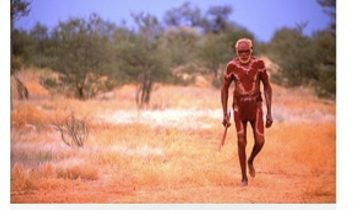 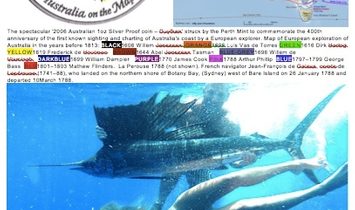 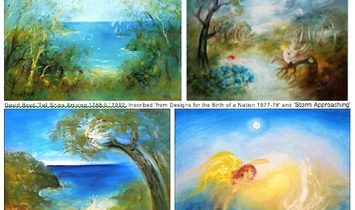 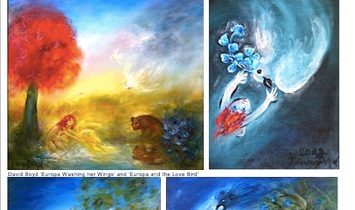 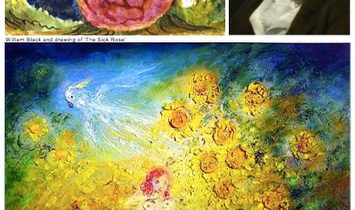 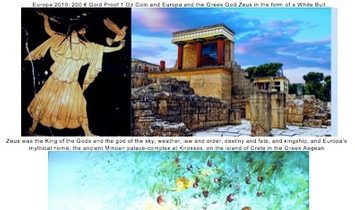 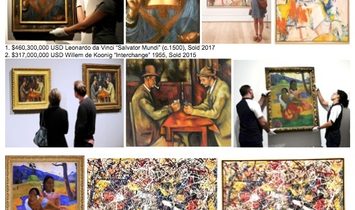 Oil on board, signed by the artist bottom left, undated (similar paintings from the artist’s ‘Europa and Cockatoos’ theme are dated 1992-2000, there is a My Street Galleries sticker on the back dated 2003). Framed, dimensions: with frame 60.0 x 80.5 cm; visible without frame 36.5 x 43.0 cm (Wagner Art Gallery, Paddington, Sydney in 2005 has written on the back “36 x 40 cm”) Condition: Excellente - Tres Bon. (Excellent – Very Good). (Note: The frame maker’s masking tape on the rear backing is coming unglued due to passage of time.) The sale is for the original framed painting only. All other photos are an illustrative guide only, including for its artistic and critical interpretive relevance.

The Boyd brothers, David Boyd (1924-2011) and Arthur Boyd (1920-1999) are internationally renown and acclaimed painters of the Australian first order and are considered art royalty, having entered the pantheon of names of the ilk of Frederick McCubbin (1855-1917), John Russell (1858-1930), Arthur Streeton (1867-1943), Elioth Gruner (1882-1939) and Jackson Pollock (1912-1956). Their great and enduring importance, influence and value continues to escalate tangentially in leaps and bounds in the art world and is now compounded by the glut of quality new originals available for sale, because their passing means there is a permanent drought in any further new work by them – they simply can no longer produce.

During their lifetimes both artists separately travelled and lived in Europe and the United Kingdom, Arthur Boyd in London, Venice, Tuscany and David Boyd spent a decade in England, France, Italy and Europe exhibiting in London and Paris. Hence, both display wonderful influences in their work of the old continent Europejuxtaposed against the new Terra Australis, and its unique elements of water, beaches, stark landscapes, wildlife, virgin discovery and European colonization, and indigenous peoples.

Both artists spent magical periods painting in the Shoalhaven district of New South Wales, in the South Coast off Sydney. Arthur Boyd at his country Bundanoon property on the Shoalhaven River, which meanders via Nowra city into the Pacific blue, and David Boyd at his brother’s and family rugged and often wind swept Beach House at 53 The Marina, Culburra.The architect-designed two storey shack is an ‘absolute beach front’ hiding high in a thicket of native coastal vegetation, just behind the dune ridge above Culburra Beach. A short climb leads to a purpose built square painting platform where the artists worked with commanding views of the ocean and 3.7 km of beach below. The area is renown for its luscious green pastures, idyllic Shangri-La like Kangaroo Valley and beautiful Jarvis Bay. Sold-on around 2002-2003, it was turned into a holiday rental for many to enjoy. A stay there, or at nearby Hyam’s Beam on Jarvis Bay which boasts the whitest-purest sand in the Southern Hemisphere is highly recommended.

Europa and “The Isle of Blue Roses”

The Discovery of Australia, and Settlement

In 1606 the Dutch vessel ‘de Duyfken’ (‘The Little Dove’), captained by Willem Janszoon (Jansz) and owned by the Dutch East India Company and stationed in the East Indies (Indonesia) for the spice trade, was sent for a voyage of exploration looking for trade opportunities in the till then hypothetical “East and South Lands”. Once he crossed the Arafura Sea, he travelled west and landed on the western coast of Australia’s Cape York Peninsula just near Weipa.  He started to chart the area, thinking that the land was still part of New Guinea, but after finding little but swampy land and violent encounters with ‘heathen’ Aborigines in which nine of his men were killed, he decided to return to Banda Neira, in Spice Islands of Maluku, in the Banda Sea, Eastern Indonesia. He called his newfound land ‘Nieu Zeland’, in Dutch after the Danish island “Zealand” meaning "Sealand".That voyage is the first European historically recorded voyage to Australia.Willem Janszoon has been called ‘Australia’s Columbus’, because Christopher Columbus discovered the Americas in the 15thcentury, Ferdinand Magellan circumnavigated the globe in the 16thcentury, and Willem Janszoon discovered the last continent in 1606. In 1999 the Duyfken replica was built at the Maritime Museum in Fremantle, and sailed around Australia in 2006-7 to Sydney.

Virgin and full of bounty, pleasure and promise. Visually, the intensely appealing, happy and pleasing scene succinctly juxtaposes and clashes the old and the new, the young and the ancient, and the naïve with the mysterious. The view opens to a secluded sandy beach, opulent sunshine and clear blue skies. A naïve and nude solitary swimmer Europa, her hair aflame in red reaching/body surfing for the shore in the direction of landfall and towards the left where appears the dark and forebodingly enticing bush of ‘blue roses’ at once linking us all the way back to William Blake (1757-1827) and beyond to Eve’s temptation (under and in which David Boyd has boldly signed his name). Europa’s fire-red hair connects nicely with the canon of one of Australia’s leading female poetesses Judith Wright (1915-2000) and her famous “Flame Tree”poem symbolism.

How to live, I said, as the flame tree lives?
– to know what the flame tree knows: to be
prodigal of my life as that wild tree
and wear my passion so.
That lover’s knot of water and earth and sun,
that easy answer to the question baffling reason,
branches out of my heart, this sudden season.
I know what I would know.

How shall I thank you, who teach me how to wait
in quietness for the hour to ask or give:
to take and in taking bestow, in bestowing live:
in the loss of myself, to find?
This is the flame-tree; look how gloriously
That careless blossomer scatters, and more, and more.
What the earth takes of her, it will restore.
These are the thanks of lovers who share one mind.

O Rose thou art sick,
The invisible worm
That flies in the night,
In the howling storm,

Has found out thy bed
Of crimson joy:
And his dark secret love
Does thy life destroy.

In the background we see at the horizon the curvature of the precious earth at once showing Australia’s isolated isle like nature and her pristine existence. In the distance is a single solitary white cloud in the shape of a stylized bird, characteristic of David Boyd’s flight of the ever-watchful sulfur-crested cockatoos that are to befriend and captivate Europa. Among many connotations, David Boyd has interwoven the enticement of interfering with Australia’s pristine beauty and the worldwide heritage and interconnected need to co-exist. Blue roses, which do not exist in the wild, are often used to symbolise secret love or the unattainable. The flowers import the building of trust, commitment and relationship, and communication over time, peace, sympathy and harmony for a couple - an idyllic and noble goal for the coupling of humans with nature.

In Greek mythology Europa was a Phoenician princess who was abducted and taken to Crete by Zeus in the guise of a white bull. She became the first queen of Crete, and later fathered Minos by Zeus. Crete was the center of Europe's most ancient civilization, the Minoans.Europa was initially a Cretan moon goddess, who was incorporated into the Greek mythology as a virgin Phoenician princess. She was the daughter of the King Agenor of Sidon (Sidonia) and the continent of Europe was named after her. ‘...Disturbed by the dream, Europa woke up in the early hours and did not go back to sleep.’The Biblical text tells that Sidon was an influential, wealthy Phoenician city when the kings of Israel and Judah ruled during the Iron Age.Biblical Sidon is perhaps most infamously known as the birthplace of the Phoenician princess Jezebel (1 Kings 16:31), who became queen to King Ahab, King of the Israelites during his reign in the ninth century B.C.E.. Jezebel engaged in the occult arts, a practice the Talmud says “contravenes the upper legion,”sabotaging the inner peace and symmetry of the world by violating its Divinely ordained parameters. One way sorcerers disturb the tapestry of creation is through sexually deviant and immoral activities,which is why the Torah describes the divinations of Jezebel in the same breath as her promiscuity (“the harlotries of your mother Jezebel and her abundant witchcraft”). David Boyd sees it as a tension giving us the fruits of the land, children, prosperity, and happiness.

Parts of the painting had a little sand, dust and hair flung at it while still wet. Suggesting David Boyd possibly painted it by a beach, most probably at his brother’s often windy Culburra beach house, and that perhaps it was hit by an unexpected wind gust, which may explain a possible unfinished looking aspect in the lower-right of the green scrub? Alternatively, it may have been creatively intentional by the artist? Regardless, it has fortunately likely ingrained and stamped in it the DNA of the artist and the unique chemical signature of the silica where it was painted. Exceptionally rare, a real one of kind priceless treasure and bonus.

World Records for the Most Expensive Paintings

The painting presented here for sale has impeccable provenance. It was purchased directly from a reputable Art Gallery. Details of this will be passed on to the successful buyer. Please be aware that ‘beauty and value are in the eye of the beholder (buyer)’. It is expected that the sale will achieve a new record for a Boyd. The buyer alone is responsible for assessing the quality and suitability of the painting before a purchase is made.The seller does not make any representations, nor give any warranty express and/or implied as to the painting’s future value or market price. The purchaser is to rely on their own inquiries. The seller will ship from Australia as soon as possible (A.S.A.P.) after cleared payment by registered/courier. Whilst every effort will be made to pack protectively, the purchaser agrees that the seller is not liable for any loss or damage during shipping. Please read the description and view the photos carefully. Returns are not accepted.

The painting is magically imaginative, aesthetically beautiful and historically and intellectually stimulating, and it is hoped it will give much pleasure to the new owner (especially if they are a lover of aqua), and whom may derive additional satisfaction in the knowledge that the generous sale proceeds will assist the owner and their family in the pursuit of life, liberty, scientific endeavor, travel, art, creativity and happiness. 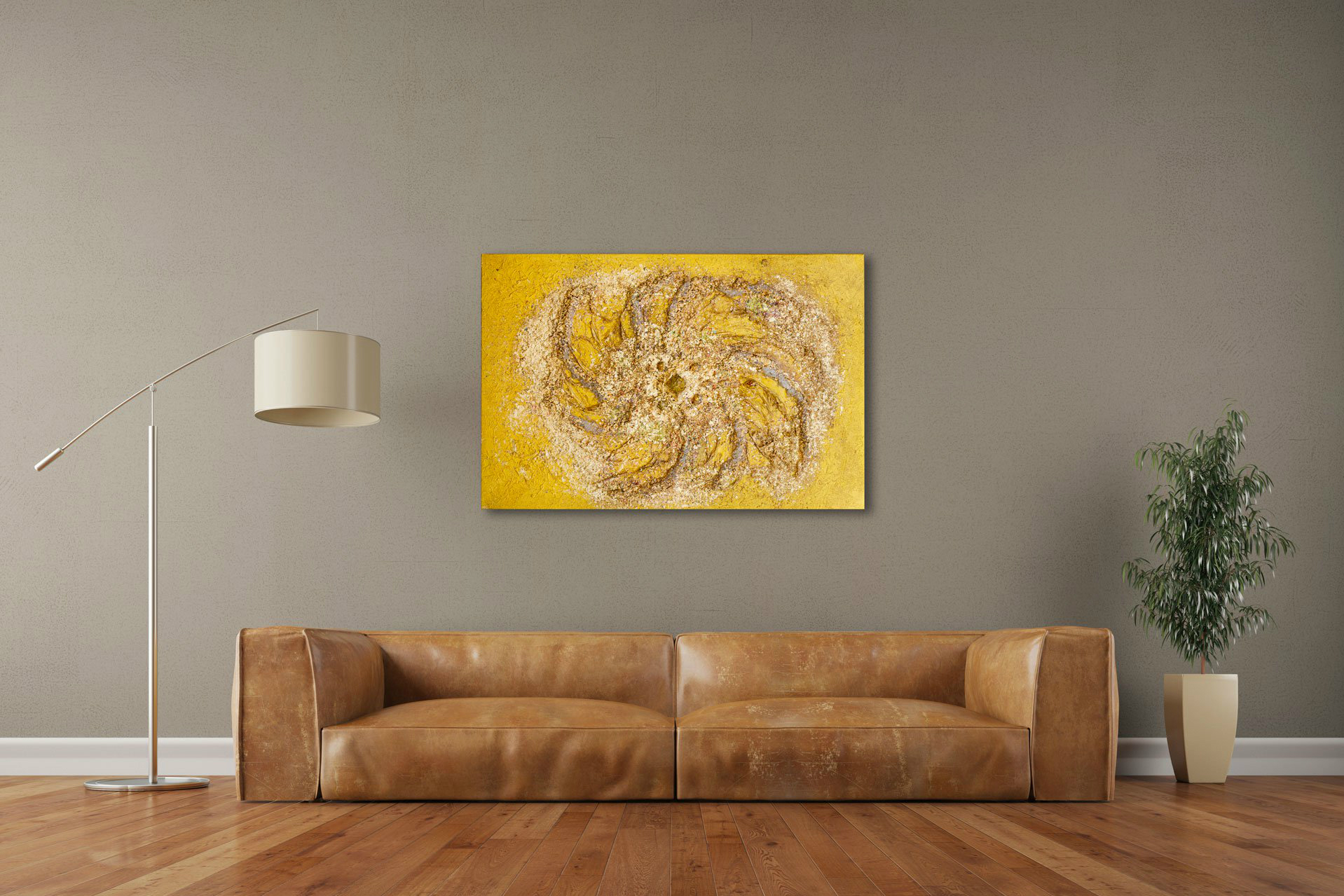 Gold, diamonds and Metatron: Luxurious abstract art for your walls
While the world rushes on by, painter Donna McCain creates enchanting (and luxurious) artworks that encourage inward contemplation and focus on hig... Read more

Peggy and David Rockefeller’ Collection for sale at Christie’s Estate.
If you’re an art collector, you won’t want to miss one of the most highly anticipated events of the 2018 spring season: the Collection of Peggy an... Read more