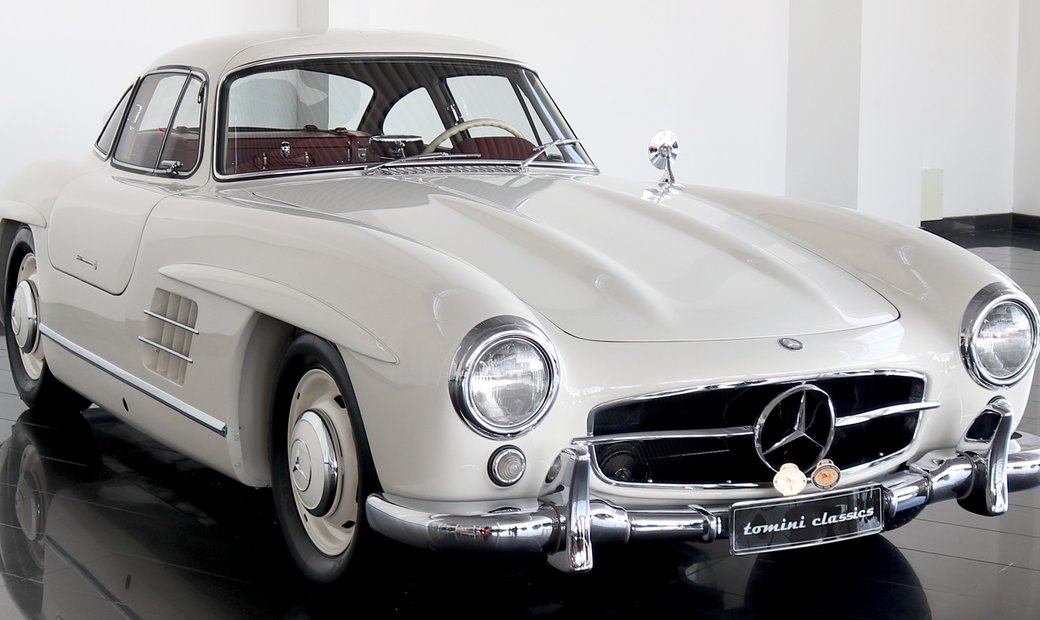 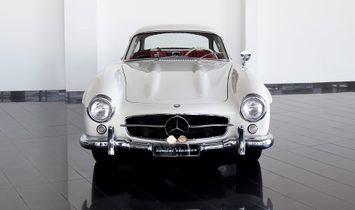 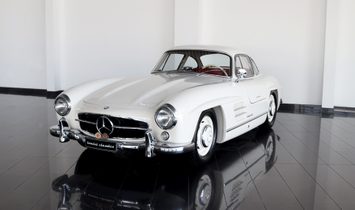 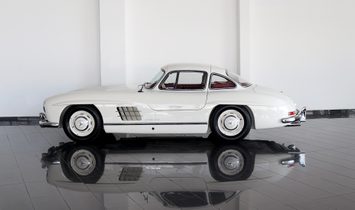 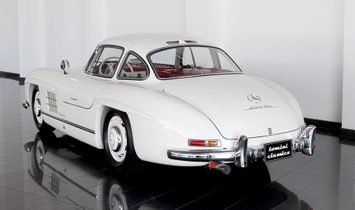 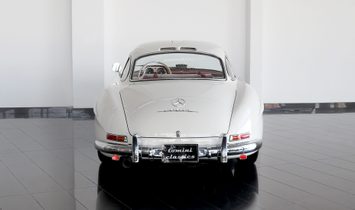 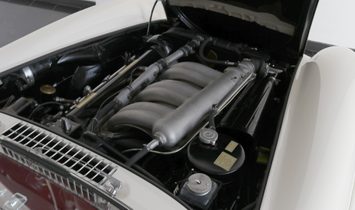 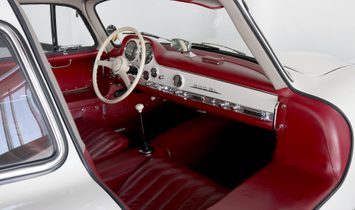 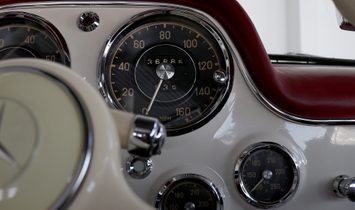 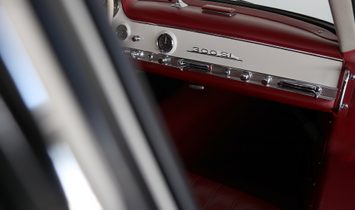 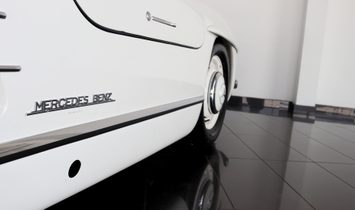 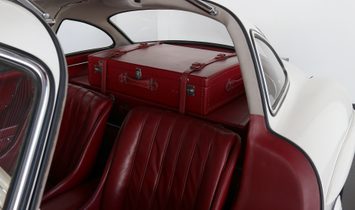 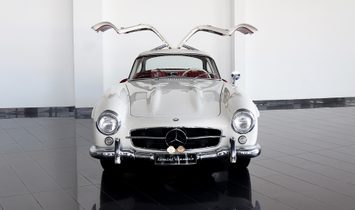 One of the most beautiful cars ever created, and in our example exceptionally well-documented, having covered just 3000 miles since an extensive 1988 restoration. Far more than just a set of breathtaking doors, the 300SL coupe set the stage for Mercedes’ triumphant comeback, from a company that was struggling a decade prior. The stunning Gullwing was a definitive statement of intent: Mercedes-Benz was going to build the finest, fastest sportscar in the world.

And in the W198, it delivered on that promise – though it very nearly did not happen at all. Thank iconoclast US importer Max Hoffman; it was his order of a 1000 units which convinced Mercedes to build a street version of their already-successful racing 300SL. First shown at the New York Auto Show in 1954 – rather than the traditional unveiling destinations of Frankfurt or Geneva – the magnificent SL was an immediate success, with the vast majority destined for American shores. Noted owners include Juan Manuel Fangio, Pablo Picasso, and no less than the pinnacle of Hollywood automotive royalty, Paul Newman.

Not hard to see why, either. The racing-inspired tubular chassis saved precious kilograms with key components made from aluminium including the hood, doors, dashboard and truck lid, while 29 SLs would be completely alloy-bodied – and very valuable today. The now-iconic gullwing doors were a brilliant engineering compromise when the extremely rigid frame necessitated super-wide sills, much higher than a regular automobile of the time – take a bow, master Merc chief engineer Rudolf Uhlenhaut who went even further and added a hinged steering wheel for easy interior access.

Under the hood, the 300SL was equally impressive. Its water-cooled three-litre overhead cam straight-six ditched the carburettor – a technology that would prevail well into the 2000s – for Bosch mechanical direct fuel injection, making it the first sportscar in the world to do so. That meant a world-beating output of 240bhp – a figure that the V8-powered Corvette wouldn’t hit until 1956.

It also meant that the 300SL was the fastest car in the world in 1955, with a blistering speed of 263kph (163mph) – impressive figures even today. If you were lucky enough to own a fully aluminium-bodied car, you would have also received the “Sonderteile” version of the six, equipped with higher compression and a competition grade camshaft, liberating an extra 15bhp, proving noticeably faster than standard Gullwings.

Chassis 5500168 is perhaps one of the most well-documented examples in existence of this deeply impressive vehicle. Bought new by Mr Frank Grew of Valencia, California, this example is fully numbers-matching, and originally delivered in metallic silver: by far the most popular colour, with more than 39% of the1,400 SLs made painted this hue.

In 1988, Mr Grew subjected the car to an extensive restoration, during which time the colour was changed to its current shade of white – the second most popular colour amongst SL owners. At the time, the car bore a mileage of just 34,672 miles.

After Mr Grew’s long stewardship, the 300SL left the sunny shores for California for Baltimore, where new owner Howard Leslie Byron continued to enjoy this evergreen sportscar through the 1990s. His handwritten notes and obsessive eye for detail – down to a copy of every original Maryland registration card – tell a tale of an owner with a keen competitive edge, with this 300SL certainly no stranger to victory on the Concours podium.

By 2002, the car was sold to Paul Holland of Connecticut, who continued to fastidiously document the SL’s service history. The car saw attention with noted 300SL specialists LYCO Engineering of Plymouth Michigan, which supplied a number of illustrated and fully maintenance manuals on the intricacies of 300SL engineering, all of which still accompany the vehicle. 300SL experts Paul Russell and Company of Connecticut also contributed many hours of service to the labour of love that is keeping this finely tuned machine in perfect condition. Finally, the car was sold in 2015 to Rex Henderson, also of Connecticut.

In the Gulf, the SL continued its winning ways, storming to Best of Show in the 2019 Edition of the Gulf Concours D’Elegance. Today, this 300SL represents an opportunity to enjoy an example with an almost unparalleled level of documentation. Virtually every service manual, accessory, registration card, toolkit and brochure are present and accounted for, with many handwritten details in the margins, permanently etching the love and care of its limited custodians over the years.

And with a mileage of just 37,000 miles on its impeccably-finished odometer, this superb, achingly gorgeous sportscar will continue to delight owners and onlookers alike for decades to come. Many have tried, but none seem likely to unseat the glorious Mercedes 300SL as the most stunning classic of all time.
For Sale by

Nurburgring driver picks: Top 10 fastest street legal cars
You’ve been waiting for this, haven’t you? Finally, we have an article with the fastest street-legal luxury cars in the world in 2020. Here you wil... Read more
Best in G-Class: 7 Mercedes G63 AMG cars to buy in 2020
Since 1979 the Mercedes-Benz G-Class (aka Gelandenwagen, or G-Wagon) has been one of the most recognizable and high-profile off-roaders the world o... Read more
The 10 most expensive Ferrari cars in the world
With prices above US$4 million for its LaFerrari supercars, Ferrari is one of the world’s most expensive car brands. As of 2020, LaFerrari is the f... Read more
New names: 10 Best supercars to buy in 2020-2021
Supercar enthusiasts can’t wait to see what the next limited, high-performance vehicle will bring to the market. They love the process, and so do w... Read more