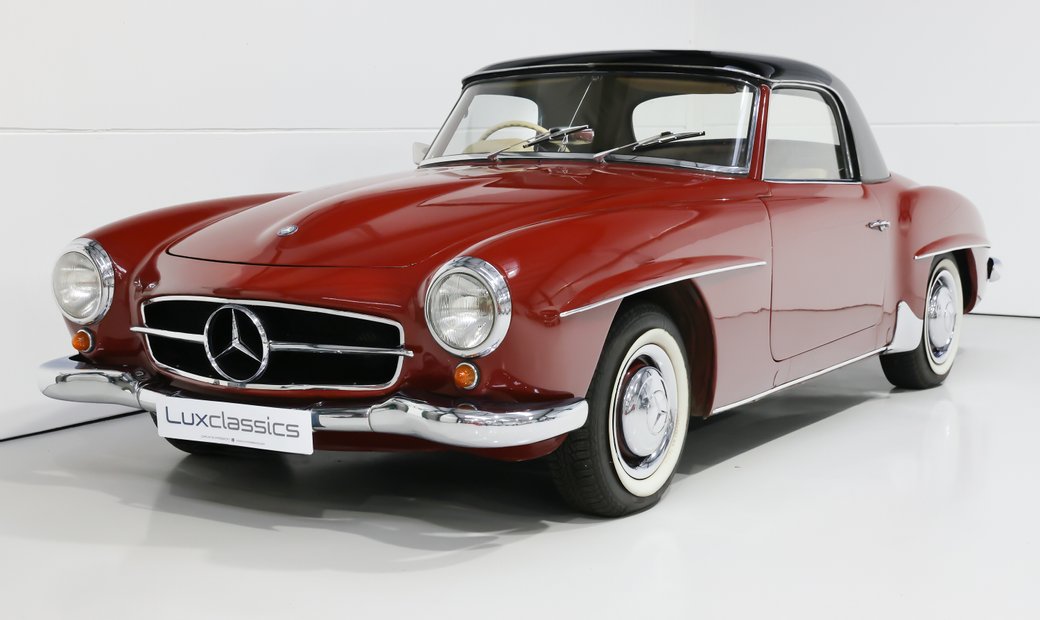 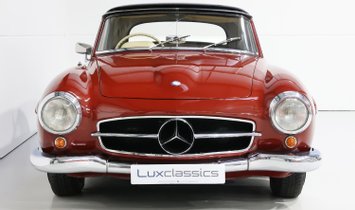 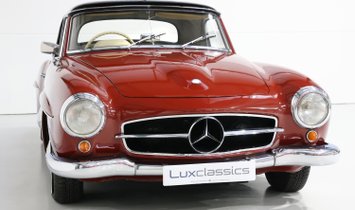 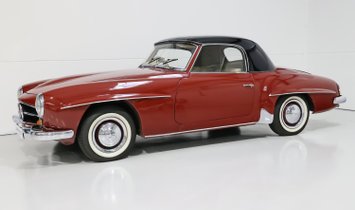 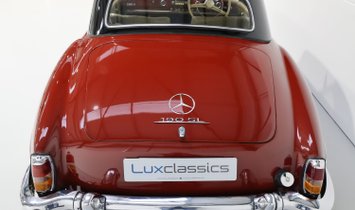 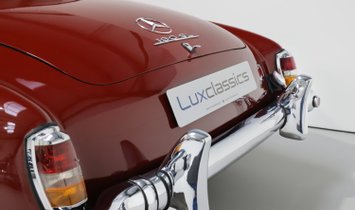 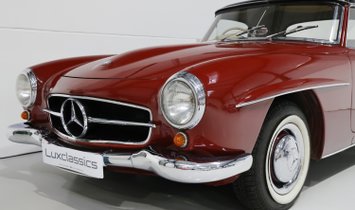 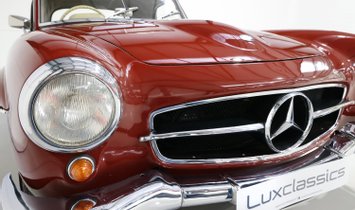 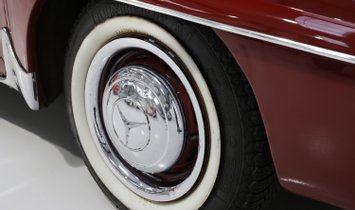 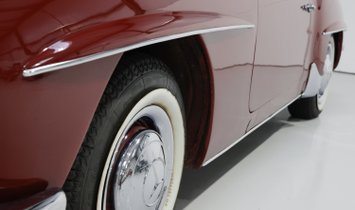 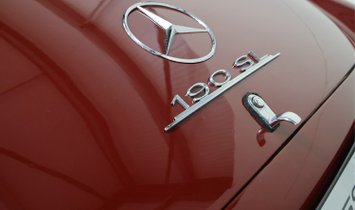 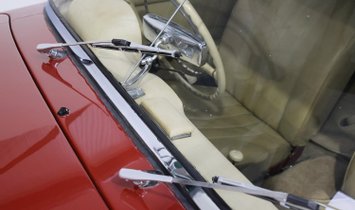 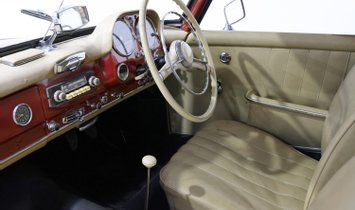 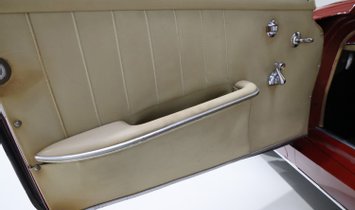 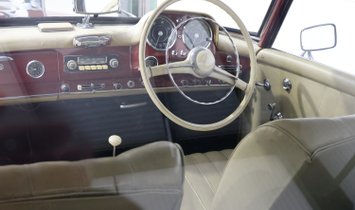 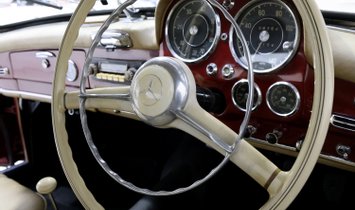 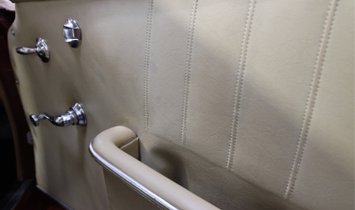 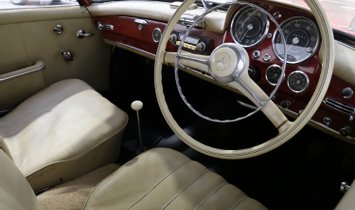 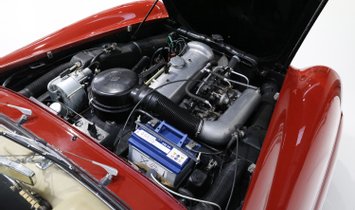 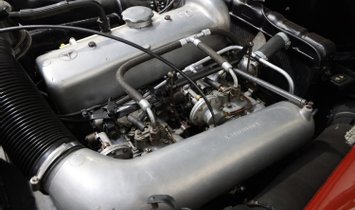 THE MERCEDES-BENZ 190SL
In 1954, Mercedes displayed a concept version of the 190SL at the New York Auto show alongside the 300SL “Gullwing”. This concept came to market in 1955 as the 190SL, a more approachable, less intense sports car compared to the record-breaking 300SL 'Gullwing'. The factory offered for the causal weekend racer a Rennsport package, options of an aero screen, cut down doors which one could convert & lighten the 190SL. While the 190SL features a carbureted 1.9 liter inline four cylinder engine compared to the 300SL's direct-injected 3 liter slant six, they share basic engine design, suspension system, and level of detail and craftsmanship that defines Mercedes-Benz.

The new engine, which shared the same bore and stroke of the 300SL, was paired with dual Solex carburetors and produced 120 horsepower. This powerplant was paired with a fully synchronized 4-speed transmission that sent power to the rear swing axles. The 190SL implemented the same suspension systems as the 300SL, all it be a stable low pivot point assembly, affording it confident handling and drivability without the tail happy nature of the 300SL “Gullwing”.

The 190SL is immediately recognizable as a Mercedes, featuring dramatic curves and through yet restrained use of brightwork that defined this era of Mercedes. Many styling cues are borrowed from the 300SL “Gullwing” as well, notably the massive three-pointed star in the grille, bumpers as well as 'eyebrows' over the wheels all it be finished with chrome.

While the 190SL did not quite offer the performance of other sports cars of the era, the impeccable quality and attractive styling made the 190SL a massive success- selling 25,881 units before production ceased in 1963. Many of these models were delivered to the United States, where its driving demeanor and elegant styling were highly valued. The 190SL is an important part of the culture of small roadsters in the 1950s, as it demonstrated how luxurious the platform could be. Now much sort after & highly collectible due to its “Style & Beauty”.

THIS ACTUAL CAR
This 1958 production retains much of the features of the early 190SL’s with a small window hard top and some of the desirable late model features. In lovely period Mid-Red, so right in that era of two-seater roadster.

Its first owner, His Grace The Duke of Rutland owned the car from 1958 to 1963 as indicated by the extensive history file with correspondence addressed to his London premises in Belgrave Place. The Duke and his Chauffeur were reunited with the 190SL at Belvoir Castle, where his Chauffeur was able to drive the vehicle again after a lapse of some 25 years.

The second owner, Wilfred Dawes OBE cherished the vehicle from 1963 to 1986, after which it was passed onto his son Dr Peter Dawes who owned the vehicle until 2007. Under their ownership, extensive work was carried out to refresh its paintwork, chromework and to bring to an excellent mechanical condition.

The vehicle was registered in Denmark where Dr Peter Dawes lived and was sold to its fourth owner in 2007, Erik Hedegaard. The current owner’s father and husband purchased the vehicle in Denmark for its current owners 50th Birthday as a surprise. In her ownership she had no hesitation to enjoy and drive the 190SL in the English Countryside, where these vehicles are at their best.

This 190SL is now UK registered with its original and first UK registration number and comes with an extensive history file detailing the provenance, mechanical work, original documentation dating back to 1958 with MOTs, and colour photos of its owners including outside Belvoir Castle. A must for anyone looking to continue its provenance, in excellent driving condition with a lovely original patina to drive as is, or full restoration. As I often say, “we can restore a classic car but we cannot restore its history”. Accessories included are a small window hardtop in black, complete with its original hard top sun visors and roadster sun visors, books, manuals and a great provenance.

This Mercedes Benz 190SL is very unusual as there are not many unrestored survivors in the market. It will make a great car to drive as is, or the basis of a full restoration which we can assist with, as we have restored numerous 190SL’s to concours standard. A very rare opportunity not to be missed.

This vehicle is available for viewing in the UK on an appointment basis and would suit a collector with whom this vehicle will represent a good acquisition opportunity.

Stock Number: U133
For Sale by