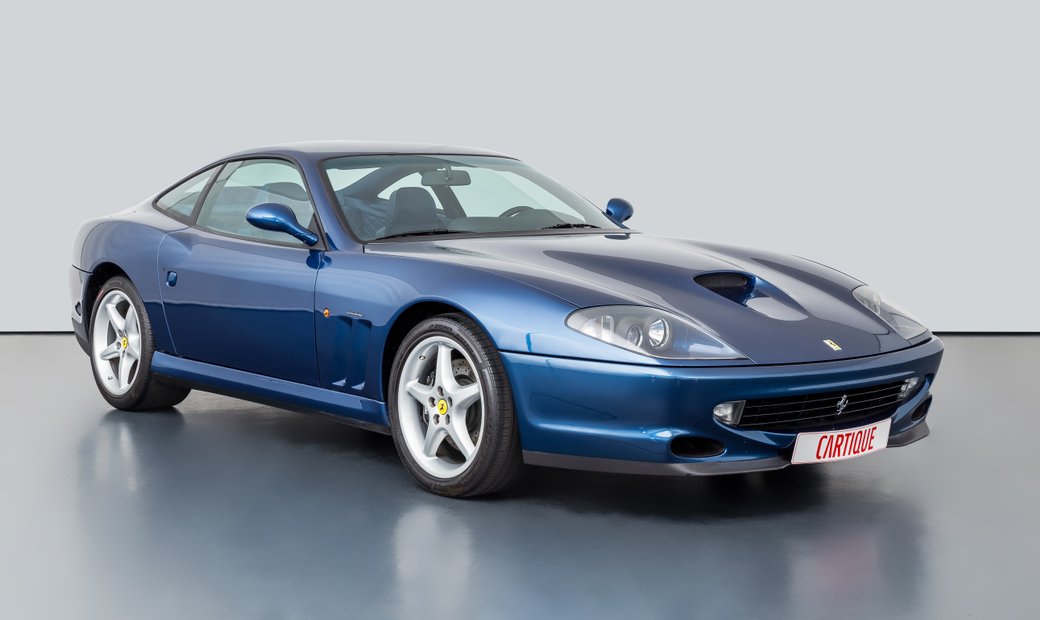 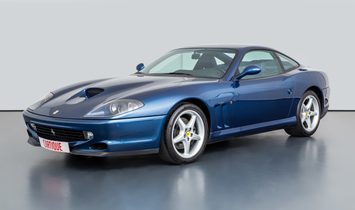 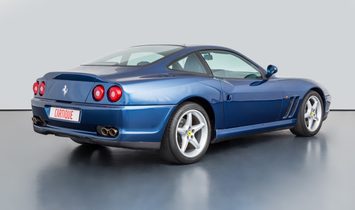 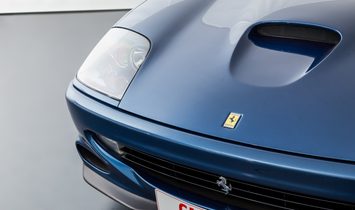 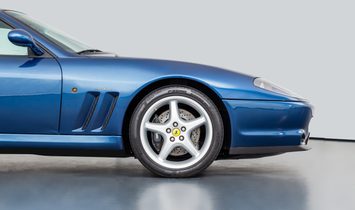 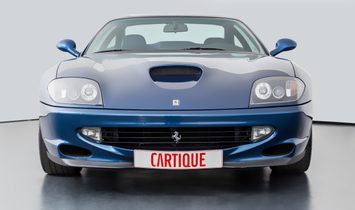 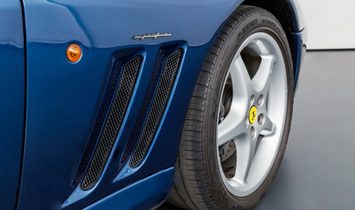 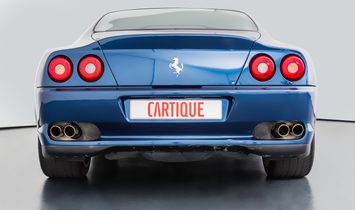 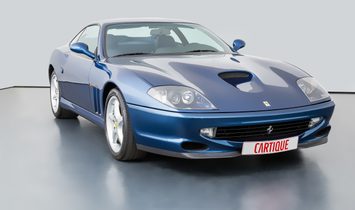 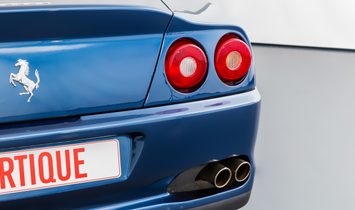 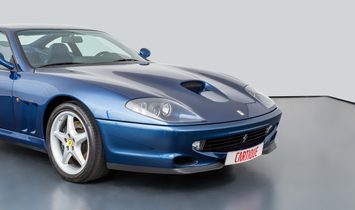 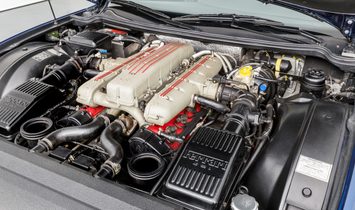 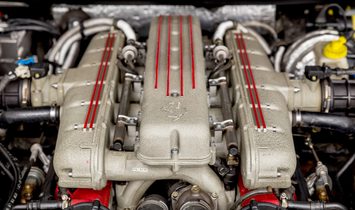 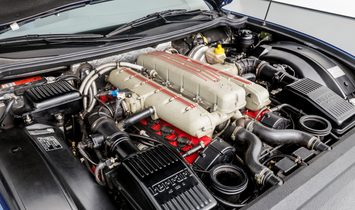 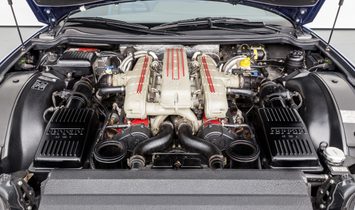 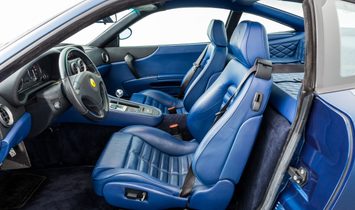 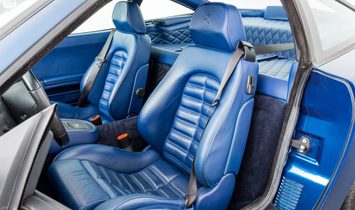 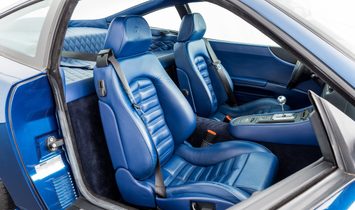 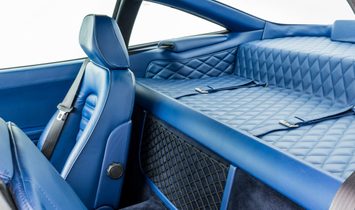 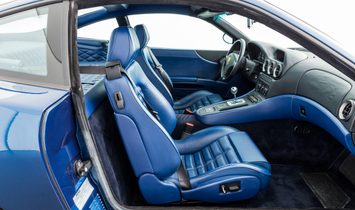 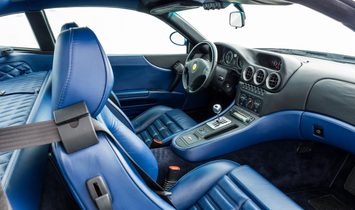 Launched to the press at the Nürburgring in 1996, the 550 Maranello was Ferrari’s answer to those who believed the performance of a front-engined V12 car could not beat that of a mid-engined sports car. The successor to the F512M, the 550 Maranello proved quicker and, thanks to its better front-engined, rear drive packaging layout, far more practical. The 550 Maranello also benefited from Ferrari’s maniacal attention to aerodynamics with a low Cd (0.33) and constant downforce over both axles. The combination of uncompromising performance and aerodynamic efficiency helped the car establish new production car speed records on the 12th of October 1998 in Marysville, Ohio, covering 100 km (62 miles) at an average speed of 304.1 km/h, (188.88 mph) and 296.168 km/h (183.955 miles) in one hour.

After over two decades of Ferrari production with a mid engine model as the performance pinnacle of the regular production range, the tables were turned in 1996 with the introduction of the 550 Maranello. The new model had a front mounted engine like its 456 GT stable mate, and had been developed from the technological progress and innovations of that model, to produce searing performance allied to impeccable road manners. The 550 Maranello made its public debut at a major Ferrari gathering at the Nurburgring, Germany, in July 1996, which centred round the launch of the new car. The then current F1 team drivers Michael Schumacher and Eddie Irvine were on hand to put the car through its paces on the track, along with a host of previous Ferrari team drivers including former Ferrari World Champions Niki Lauda and Jody Scheckter.

The body lines from the pen of Pininfarina unsurprisingly had echoes of the new model’s 2+2 stable mate, the 456 GT, in the overall premise. However, there were also retro hints from earlier classic models, like the twin exhaust air slots in the front wings akin to those of the sixties 250 GTO and 275 GTB, whilst the tail light treatment was even closer to that of the fabled 365 GTB/4 “Daytona” model than it had been on the 456 GT. The new model did have its own positive identity, with a shallow and wide radiator air intake, which with the integral front spoiler gave the look of a hungry shark approaching your rear view mirror, when being followed along the road by it. The styling details gave it an appearance of aggressive elegance, and although some people were initially a little subdued in their praise, no doubt expecting something more visually radical, the dynamic qualities of the car soon won over the doubters. After all, here was a totally practical and comfortable 2 seat model, with plentiful luggage space, that had overall performance close to that of the bare bones F40 “racer for the street” of less than a decade earlier.

Technological advances during the intervening period, particularly with regard to suspension and traction control systems with electronic brains, meant that a front engine car could be made to handle as well as a mid engine model. One feature carried over from the preceding F512M model was the use of high intensity homofocal covered headlight units, that obviated the necessity of the retractable units of the 456 GT, and thus gave the car a homogeneous line whether the lights were in use or not. The bodies were mounted on a 2500mm wheelbase chassis, which was 100mm less than the 456 GT 2+2 model, with a front track of 1632mm and rear track of 1586mm. It was constructed in the traditional steel tube fashion, incorporating substructures to support mechanical and body components, bearing factory chassis type reference F 133 AB. The model was available in right or left hand drive form, with power assisted steering as standard. The body was a lightweight aluminium alloy welded to the steel frame via a specially formulated sandwich material called Feran, which permitted the welding of the two dissimilar metals, whilst the front and rear valances were composite mouldings. Independent suspension was provided all round with front and rear anti roll bars, and electronically operated driver controlled variable shock absorber settings, to provide either “normal” or “sport” mode, integrated with an ASR drive control system. When in “normal” mode the brain places an emphasis on stability relative to road conditions, reducing power to the driven wheels via the engine management system, or bringing the ABS braking system into play, to maximise traction. When in “sport” mode the brain provides the driver with the facility to control the situation by his or her own inputs. The adjustable dampers were provided with an electronic “brain” that monitored various factions, like steering angle, road speed, braking effect or acceleration, to optimise the settings for the driving conditions.

The steering was of the Servotronic speed sensitive power assisted type, the degree of assistance varying with road speed, being greatest at parking speeds and reducing as speed increased. The standard road wheels were stylised renditions of the traditional five spoke “star” alloy design, featuring elegant convex spokes and five bolt fixing with 18″ diameter rims, 8.5″ wide at the front and 10.5″ wide at the rear. Four wheel ventilated disc brakes were provided, each disc having a four piston light alloy calliper, plus a four channel ABS anti skid braking system, integrated with the ASR drive control system as mentioned. The engine was a derivation of that designed for the 456 GT with the same cubic capacity, although the total cubic capacity was chosen as part of the model title, 5.5 litres (hence 550) rather than the single cylinder swept volume figure that had been used with the 456 GT, with factory type reference 133 A. The 65 degree V12 engine had an actual cubic capacity of 5474cc, with a bore and stroke of 88mm x 75mm, four valves per cylinder, twin overhead camshafts per bank, and dry sump lubrication. The block, cylinder heads, sump, and sundry castings were constructed from light alloy, featuring Nicasil treated alloy cylinder liners, and titanium alloy con rods. A Bosch Motronic 5.2 combined fuel injection/ignition engine management system was fitted, plus a variable back pressure stainless steel exhaust system, to provide a claimed power output of 485bhp at 7000rpm, driving through a six speed + reverse transaxle.

The interior was upholstered in leather as standard, with electronic adjustment facilities for the seats, and a large luggage platform behind them. Twin airbags were provided, as was air conditioning, electric windows and door mirrors, plus a stereo system with CD player. As an option sports seats were available, along with a range of items from the “Carrozzeria Scaglietti” personalisation accessories that were introduced in 1997, to enable clients to individualise their cars.

The history of the here offered Ferrari 550 Maranello begins with the delivery by the Loris Kessel Auto SA to the Swiss first owner, living in Massagno, Italian Switzerland, in March 2000. Only 5 months later in August and with a mileage of 2,850 KM the sale of the car to its second owner takes place, living in the same city as the first owner. For the next five years, the car will remain in the same hands, with the first service being carried out in April 2003. This happens at a mileage of 1,982 KM. In April 2005, the ownership changed for the third time. This leads the car near Zurich. The new owner has shortly after his purchase a renewed service at the local Ferrari agency. The mileage is still just 6,004 KM. For the next 5 years, the vehicle remains in the same ownership. In June 2007, with a mileage of 16,614 KM, another customer service takes place. It should represent the end of the regular driving period of the Ferrari for the time being. The owner subsequently canceled the registration of the car and stored it in his garage for the next 3 years. In June 2010, the last change of ownership should take place, the mileage still showed 16,794 KM. The new owner, living near Bern, bought this Ferrari from the beginning on as an investment and so it is not surprising that, apart from a few rides to avoid storage damages, the Ferrari should be moved in the next 8 years only very restrained. In the late autumn of 2018, the car is purchased by our company and presents itself today, after even more than 19 years still in an absolutely new condition, even moreover in a beautiful and rare color combination.

We hand over this vehicle to its new owner with a fresh service and new MOT, as well as all original documents. For detailed questions, please feel free to contact our sales staff at any time.