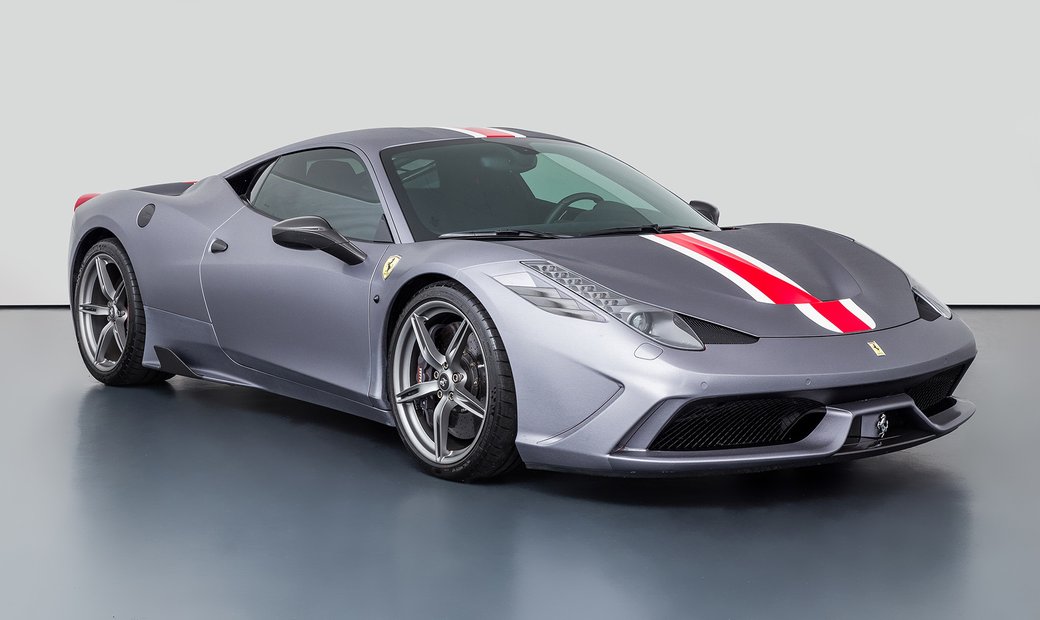 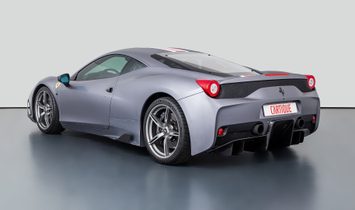 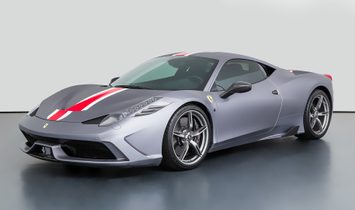 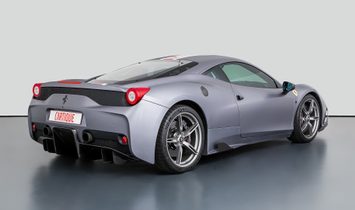 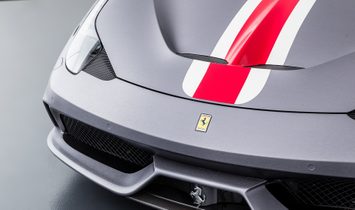 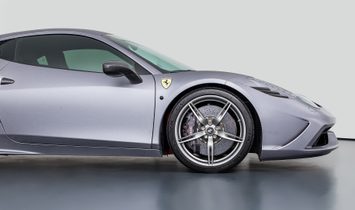 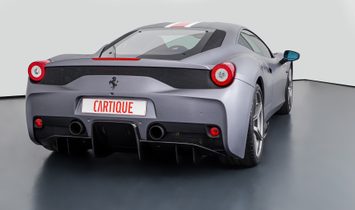 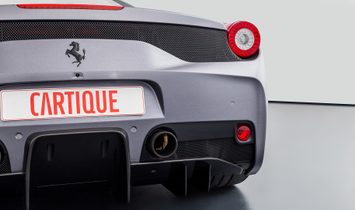 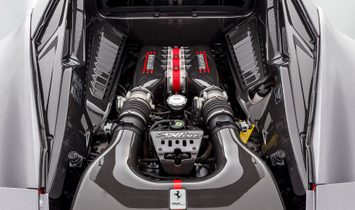 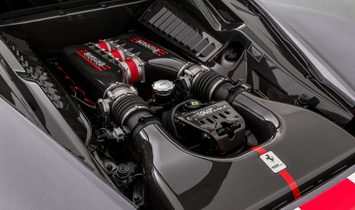 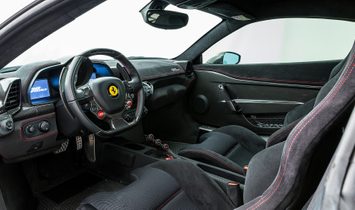 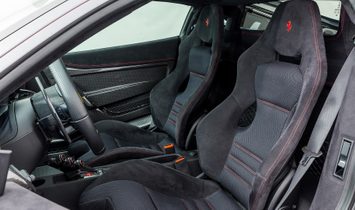 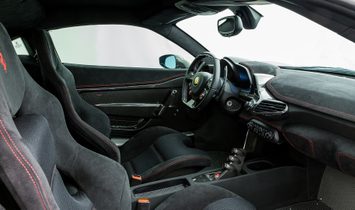 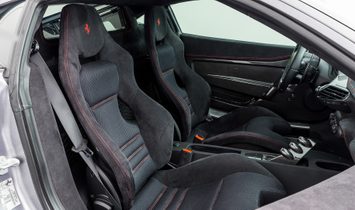 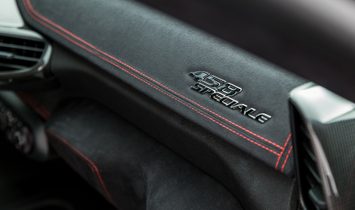 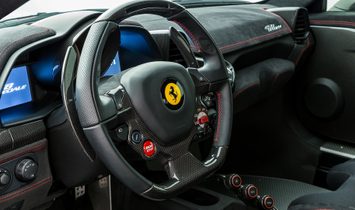 With the F355, they brought the paddle shift from Formula 1. With the F430, the electronically controlled differential including sport ESP. And now there is even a drift aid at Ferrari: As a worlds first, the Ferrari 458 Speciale makes deliberately provoked rear swiveling easier. An innovation that is as spectacular as it is unbelievable: it is called Side Slipangle Control (SSC), it is a kind of assistance system for drift fans, helps amateurs to drive sideways and is also intended to garnish future Ferrari models. Thanks to new algorithms from the yaw rate and steering angle sensors, SSC recognizes the difference between an unwanted sideways movement and a deliberately initiated drift. In the latter, the system does not take away any torque when the Manettino is in the “CT off” position and ESP does not brake, even though there is slippage at the rear axle. Racing driver drifts seem to succeed on their own: keep the Ferrari 458 Speciale neutral up to the apex, then accelerate early, but not suddenly, and the rear gently pushes. If you now feed the rear axle more sensitively with more power, you will come out of the corner in a carefully metered manner - without any nasty counter-dangling at the corner exit. From the outside it looks incredibly fast and at the same time impressively soft - as if a racing driver is doing his laps. And this is how you feel, is on the move in a new dimension of your ability, puts one creamy powerslide after the other. What increases self-confidence enormously: Unlike many super athletes, the Ferrari 458 Speciale does not demotivate the driver with excessive demands, but increases his feeling of happiness. A new ease of driving that can be measured - on the scales in 90 kilograms: the interior and chassis of the Ferrari 458 Speciale slimmed down by 20 kilograms each, the exterior and the unsprung masses by 13 kilos each. It was even possible to get eight kilograms on the engine. The most powerful V8 vacuum cleaner ever built by Ferrari does not come from a racing engine, but partly takes on its properties such as low flywheel mass, 180-degree crankshaft, speeds up to 9,000 rpm and an incredibly high compression ratio of 14: 1 (Italia: 12 , 5: 1).

This is made possible on the one hand by stronger pistons, new materials and above all a more precise knock control. In addition, the valves in the Ferrari 458 Speciale are allowed to open five percent further, and the exhaust loses a quarter of its counter pressure. Result: 605 instead of 570 hp. This means that the speed when accelerating is even more explosively high than with the Italia. But in spite of the racing characteristics, corners can also be a gear higher than expected and drive with fewer tours - up to 540 Nm push the two-seater so brute that there is still enough excess power for a powerslide. And then there is the impressively fast dual clutch transmission, the only one on the market that shifts down without delay when the paddle is pulled. The technicians have reduced the switching time here by another 44 percent. That alone calms the Ferrari 458 Speciale when braking. The downshift can be deliberately included - for example, to minimize understeer at the curve entrance due to load changes. The flaps in the front are a masterpiece of air guidance, work purely passively, open only from the wind pressure - the vertical at 170, the horizontal at 220 km / h, which reduces lift. In addition, a hatch on the huge rear diffuser opens electrically. As with some models, the Ferrari 458 Speciale does not require any unsettling wings - whereas the competition cannot do without monstrous tail units. And as with the 430 Scuderia, Ferrari proves that a modern super sports car must not only shine on the racetrack, but above all be easy to master on the country road. Here, the electronically controlled differential with the sensitive adaptive shock absorbers ensures maximum traction on mogul roads.

Not enough that the Ferrari 458 Speciale offers drift help - it also has telemetry. The driver can record his data such as braking point and pressure, position of the throttle valve, slip on the rear axle, cornering speed and line selection and then read it out using a USB stick. If you do laps more often on a racetrack, you can then compare the profiles. If the route has not yet been recorded in the 458 Speciale, you can read it into the system yourself - you only have to drive it once.

The vehicle offered here was delivered by Ferrari dealer Ulrich GmbH in Frankfurt am Main on January 19, 2015 to its first owner in Luxembourg, who registered the car for the first time on February 6, 2015 and wraped it in its current color. In June 2015, however, the sale already took place and the Ferrari returned to Germany, where its second and to date last owner registered it on June 19, 2015. The last customer service was carried out in March 2019 by Ferrari dealer Gohm, with a mileage of 5,683 KM. We hand over this Ferrari 458 Speciale including all documents and service evidence to its new owner and are happy to answer any questions you may have.
For Sale by

New names: 10 Best supercars to buy in 2020-2021
Supercar enthusiasts can’t wait to see what the next limited, high-performance vehicle will bring to the market. They love the process, and so do w... Read more
Luxury garages: Unique cars of tech billionaires, old-school magnates and Gen-Z idols
JamesEdition is reviewing the car-buying habits of wealthy petrolheads. From the classic 911 to the latest Bugatti and Pagani models, you can find ... Read more
The top things you need to know about the Aston Martin Vantage
How much is an Aston Martin Vantage? To answer this question, let’s take a closer look at this iconic car. “Vantage embodies all that is beautiful ... Read more
The 10 Coolest Paint Colors in the Lamborghini Squad
“What is the best paint color for a Lamborghini?” “What are Lamborghini’s signature colors?” “Best selling colors,” “best white paints,” “best colo... Read more