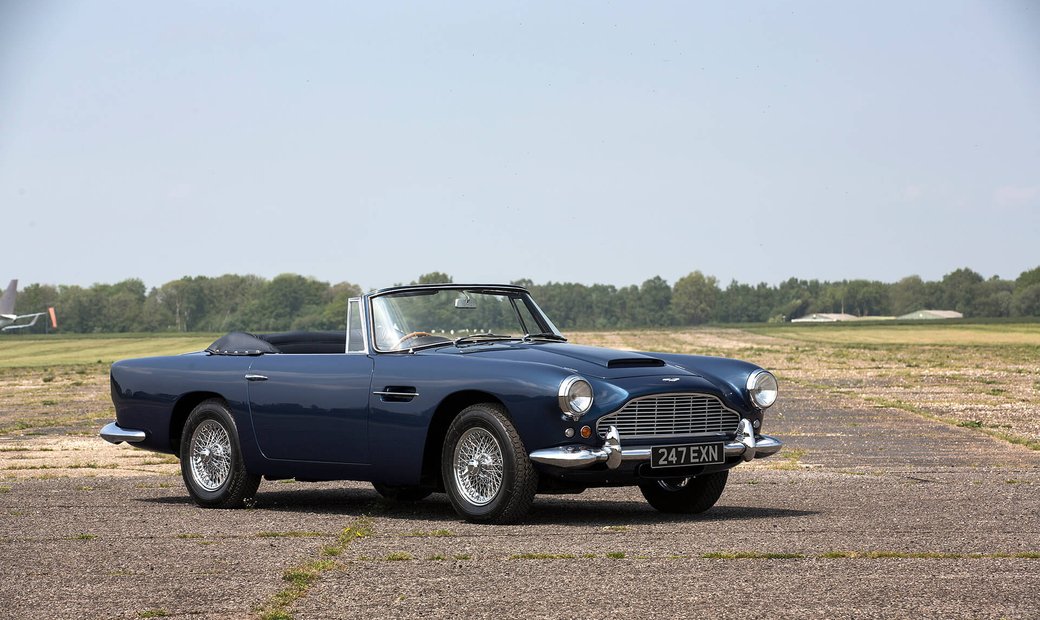 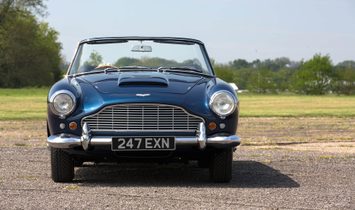 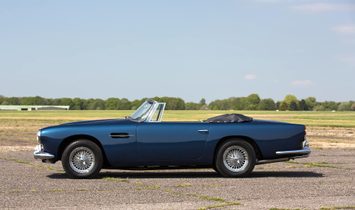 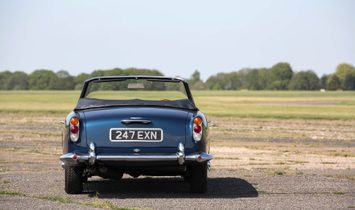 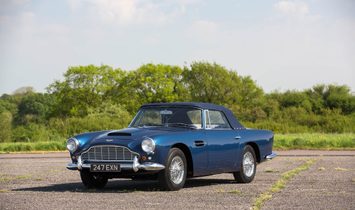 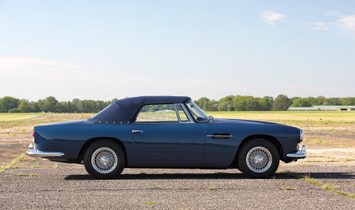 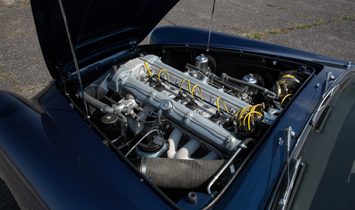 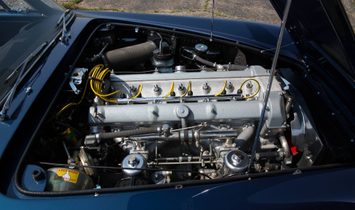 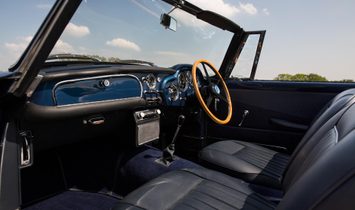 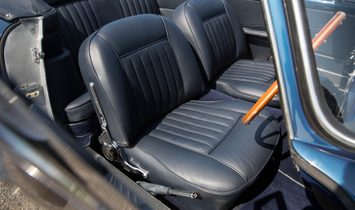 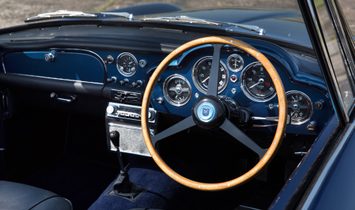 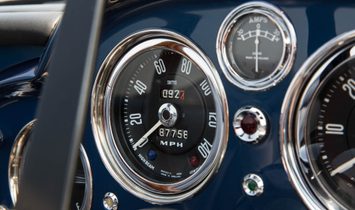 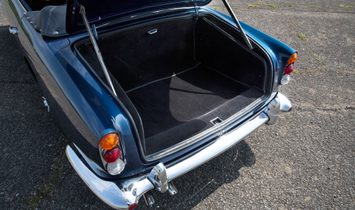 From the moment of its introduction in 1958, the classical proportions of the Touring-style Aston Martin DB4 made it instantly recognizable and, with it, an iconic look was introduced — one that would survive with only minor revision until 1970.

Along with being the first production car capable of 0–100–0 mph in less than 30 seconds, the DB4 had disc brakes all round and 240 brake horsepower on tap, meaning it was able to reach the 100-mph mark in 21 seconds. This impressive performance made the DB4 just about the fastest thing on the road, establishing itself as an equal competitor to its Italian rivals. The car was designed to combine sustained and safe high-speed driving with rapid acceleration and positive control, resulting in a welcomingly smooth and responsive ride for a classic car.

The DB4 was available only as a closed coupé until September 1961, when the convertible was unveiled. This new model featured a large yet slim in diameter wooden steering wheel and a body-colour-matching dash panel that was inset with a simple switchgear and dials — a finer detail exclusive to the convertible, as the coupé had a somber black fascia. The DB4 Convertible is the rarest production Aston Martin road car of the David Brown era, with only 70 examples ever produced.

Aston Martin had moved from strength to strength throughout the 1950s and 1960s, and the DB4 played a crucial role in this success. In 1958, Aston Martin was awarded with a Royal Warrant of Appointment by Prince Philip, giving the marque the right to display his coat of arms on their cars and state on company letterhead the ‘Motorcar Manufacturers by Appointment to His Royal Highness’.

With its impeccable pedigree, it’s of little wonder that the DB4 continues to be the object of desire amongst the world’s finest GT car enthusiasts. Whilst “Aston Martin” and “movie car” generally evoke images of 007’s famed DB5, the DB4 also graced the silver screen in the 1960s with the cult classic The Italian Job, which starred Sir Michael Caine, who drove a DB4 Convertible.

This stunning example, chassis number 1091/R, is the most desired late-production Series V variant. It was sold new in early March 1963 through the marque’s Brooklands agent, with the Aston Martin build sheet confirming its first owner to be Wrinton Vale Nurseries, of Congresbury, Somerset, with the first UK registration noted as ‘247 EXN’. By the end of March, the car was returned to Aston Martin for a service, having covered 1,888 miles, with the build sheet also recording various rattles being rectified.

Additional recorded history from this period includes factory services carried out between 1964, with mileage noted as 27,831, and 1968, with mileage noted as 63,191. The car later passed to a G V Helmer in Southampton, before being bought by Arthur Moore of Dorset in 1978. Moore maintained ownership for eight years, before selling the car to David Menzies Hart in 1986. A letter and photos contained within the car’s extensive history file confirms the condition of the car when Mr Menzies bought it: “Front stripped of paint and hood, and interior trim removed from the car. The car has been in dry storage for approx. 10 years. Restoration was started following a failure of the clutch thrust mechanism. The car can be considered complete.”

In this partially disassembled condition, the car was bought by Marc Albert of Euro Cellular Limited in December 1989. The car was returned to Aston’s Newport Pagnell factory for a complete, ground-up, no-expense-spared restoration. The work was completed in June 1992, with restoration invoices amounting to over £73,000, documentation of which can be found within the car's history file. The car remained in storage at the Aston Martin factory during Mr Albert’s ownership and was entered in two AMOC Concours d’Elegance, both held at Silverstone, finishing 3rd in 1992 and 2nd in 1993.

In September 1993, having covered less than 100 miles since it’s restoration, the car was offered for sale at the Christies Beaulieu auction, where it was bought by Joseph William Cashin, a resident of Dorking, Surrey, for the Sondes Fields Collection. During its time in this collection, the Aston was used sparingly, covering approximately 5,000 miles over 20 years of ownership. Upon Joseph Cashin’s death, the car passed to his nephew and continued to be maintained by the collection’s in-house mechanic, whose handwritten notes can also be found in the history file.

Although the DB4 Convertible had covered very few miles since its factory restoration over 20 years ago, it was still showing some minor signs of age. So, when we acquired the DB4 in 2014, a conscious decision was made to restore it back to concours standards, with the work being entrusted to marque specialist Desmond Smail. Strict instructions were made to not only ensure that the car was cosmetically perfect but to also replace the hood, clutch, tyres, and front screen due to delamination. Whilst work was being carried out by Mr Smail, the engine was upgraded by Aston Martin specialist RS Williams to their revered 4.2-litre specification. As can be seen from the documentation in the file, RS Williams tested this uprated engine and it produced great results, including 290 foot-pounds of torque at 4,500 rpm and 275 brake horsepower at 6,000 rpm, compared to the standard numbers of 240 foot-pounds of torque at 4,200 rpm and 240 brake horsepower at 5,000 rpm.

Finished in the oh-so-attractive colour of Blu Sierra, this car has not only received a documented restoration by the Aston Martin factory but also a recent concours-quality restoration by marque experts. Accompanied by an expansive and fully detailed history file, this example would enhance any collection and satisfy the most discerning collector.

New names: 10 Best supercars to buy in 2020-2021
Supercar enthusiasts can’t wait to see what the next limited, high-performance vehicle will bring to the market. They love the process, and so do w... Read more
How much is an Aston Martin Vantage? The coolest V12 and V8 models with prices
How much is an Aston Martin Vantage? To answer this question, let’s take a closer look at this iconic car. “Vantage embodies all that is beautiful ... Read more
The 10 Coolest Paint Colors in the Lamborghini Squad
“What is the best paint color for a Lamborghini?” “What are Lamborghini’s signature colors?” “Best selling colors,” “best white paints,” “best colo... Read more
Best in G-Class: 7 Mercedes G63 AMG cars to buy in 2020
Since 1979 the Mercedes-Benz G-Class (aka Gelandenwagen, or G-Wagon) has been one of the most recognizable and high-profile off-roaders the world o... Read more